Last year, over 200 students from public high schools across the Palmetto State descended on the College of Charleston for Lowcountry German Day. They heard from a panel of German program alumni who were all working for Mercedes-Benz Vans in North Charleston, South Carolina. This year, the number of attendees is poised to double when the day-long event takes place on Tuesday, Nov. 27, 2018, in the College’s Sottile Theater. 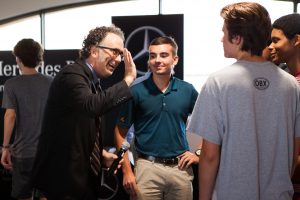 “Lowcountry German Day is an exceptional opportunity for high school students from across South Carolina,” says Morgan Koerner, chair of the Department of German and Russian Studies and the originator of the event. “It’s an occasion that provides students a clear idea of the many career paths our program can offer as well as the connections our program has with local industry and internships abroad. All of the visiting students are studying German at the high school level, and this event will help them understand the advantages of continuing that study in college, particularly at the College of Charleston.”

For this year’s edition, Mercedes-Benz Vans is returning as the event sponsor and the German Embassy in Washington, D.C. is paying for transportation for some of the students who will be coming from as far afield as Charlotte, North Carolina. Lowcountry German Day was originally scheduled to take place in October, but was postponed due to inclement weather from Hurricane Michael.

“What’s important for these high school students,” Koerner explains, “is that they get an opportunity to hear from recent alumni who will share the details of their journeys from college to the professional ranks. Those narratives help demystify what it takes to become an IT specialist at Mercedes-Benz Vans like Ramona Montjoy ’93, or a project manager at Mankiewicz Coatings like Joseph Redding ’12 or even an M.D. candidate at the Medical University of South Carolina like Nicki Pullman ’15, all of whom will participate in a panel discussion regarding the ways in which studying German has helped them in their careers.”

Also serving on the panel this year will be three seniors from the College. Stephanie Selker is a double major in political science and German and an intern at Mercedes-Benz Vans. She just returned from a year abroad studying at the University of Bamberg in Germany. Hillary McLaurin, another senior, is a double major in computer information systems and German. She won a Gilman scholarship to study abroad and interned in IT in Germany. And Tyler Owens is a German major with minors in business, French and Russian Studies. He completed an internship in Germany in 2017 and won a Critical Languages Scholarship from the U.S. Department of Defense to study Russian in Russia last summer.

In addition to the alumni panel discussion, attendees at Lowcountry German Day will be treated to what Koerner describes as a “mini lesson” that will be given in “mega-church style due to this year’s phenomenal attendance.” In the lesson, German majors and minors from the College will engage and interact with the high school students.