CofC is Flipping the Classroom

It shouldn’t surprise anyone that faculty at the College of Charleston are always searching for more effective ways to teach their subject matter. Part of that is rooted in their desire to help students succeed by better preparing them for post-college careers. And this ongoing work has led some to implement a novel concept that’s often referred to as “flipping the classroom.”

According to biology professor Melissa Hughes, who has been using a flipped approach for the last two years in several of her classes, the definition is pretty straightforward. 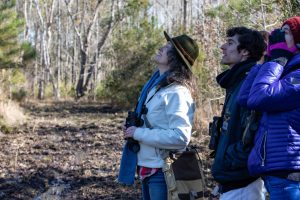 Melissa Hughes with her ornithology class at Dixie Plantation. (Photo by Heather Moran)

Hughes adds, “Since early 2017, I’ve completely flipped my animal behavior class and we now use class sessions for activities or discussion to clear up any misunderstandings about the material. We also use that time to work on longer-term projects such as applying theoretical knowledge to interpreting novel data sets.”

In this course, Hughes reserves one of the three weekly class sessions for reviewing material that some students haven’t fully mastered. (Though those sessions are optional, they customarily draw half the students in the class.) Prior to the review session, the students are required to watch the relevant lecture online, read the applicable material and take a quiz on it.

“The goal in those review sessions,” she explains, “is always to have the students doing something – working alone or in groups – that gives them a different perspective on the material. Ordinarily what I do is offer activities designed to clear up misunderstandings that I saw in the quiz responses.”

Hughes says she hit upon the flipped approach a few years ago after a Saturday make-up session was scheduled following a series of class cancellations due to storms.

“I realized that some of my students work on Saturdays and others would be less inclined to come in on a weekend, so I had to figure out the next best way to ensure that we could cover that material,” she recalls. “Putting my lectures online seemed like the best approach.”

Putting those lectures online, says Hughes, has forced her to modularize the course content, and that in turn makes it more manageable for most students. With this approach, she says, they can take in the lectures at their own pace.

“It allows me to get a much more fine-grained appraisal of what the students are learning and what they’re lacking,” says the professor, noting she’s still analyzing classroom data on whether students are better mastering the course material under a flipped approach. “On top of that, it seems to afford me more time one-on-one with each student during our class sessions.”

Hughes isn’t alone in her efforts to turn the traditional classroom paradigm on its head. Mathematics professor Martin Jones says he stumbled upon the concept more recently, though he doesn’t describe his approach as flipped.

“In the wake of Hurricane Matthew last fall,” Jones explains, “I was looking for a way that my students wouldn’t get behind because the College had to cancel several days of class. I realized that I could easily put my lessons on video and share those online in advance of our class sessions. Doing that allowed us to utilize our class meeting time more efficiently, and essentially we kept ourselves on pace despite those missed meetings during and after the storm.” 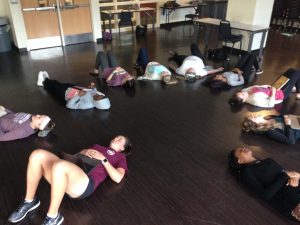 Students read aloud to one another and while performing pre-writing stretching and breathing work in the Honors class ‘Engaging the Dance-Thinker.’ (Photo provided)

Then there’s Daniel Guttentag, who teaches in the Department of Hospitality and Tourism Management. He describes his approach not as flipping the classroom, but as experiential learning. For him, that involves using Virtual Reality (VR) headsets to help his students understand how evolving technologies are impacting the hospitality and tourism sectors.

“In two of my courses,” Guttentag explains, “we talk about the impact of new technologies such as driverless cars and robots, and then I introduce the students to VR by having them experience it. They watch 3-D and 360-degree videos that demonstrate immersive VR experiences. Afterward, we discuss the experiences and how this technology could be used within hospitality and tourism.”

Guttentag has been employing this tactic for the past three semesters. He says that roughly half his students haven’t experienced VR before, so it makes for engaging classroom discussions.

“Where I taught before,” he explains, “the class sizes were too large and we couldn’t have offered experiences like this. Once I came to the College, I realized that the smaller class sizes would enable me to pursue the use of VR. Ultimately, it’s fun for the students, but it also enhances their learning in this field because VR is a unique medium that offers a truly impactful experience.”

And, finally, there’s English professor Meg Scott-Copses, whose work doesn’t flip the classroom as much as it tips it on edge. She uses dance to teach writing in her honors course titled “Engaging the Dance-Thinker.” In this class, students work with and through the body to choreograph, compose and enact written and physical texts.

“By pairing two very different modes of communication,” Scott-Copses explains, “the assignments and activities reinforce the idea that the body and the mind work hand-in-hand. We typically think of writing as a cerebral act and dance as a physical act, but both are communicative, both make use of imagery and both are composed from phrases. This approach evolved from me wanting to introduce my writing students to methods that draw on both body and sensation-oriented ways of knowing. Now, they’re learning to tap into what we might call our ‘felt sense’ to achieve flow in both writing and in dance.”

Each of these initiatives serves to underscore the College’s stated goal of empowering its students and helping them explore every inch of the expanding intellectual universe.

Certainly that’s worth a little flipping.