Black History Month is a time to reflect on the achievements of African-Americans who have made an impact, big and small. Below is the story of Linda Dingle Gadson ’72, one of the first African-American women to graduate from the College of Charleston.

When Linda Dingle Gadson ’72 decided to enroll at the College of Charleston in 1969, joining only a few other women of color on campus, she did it because she thought it was the right time. Carrie Nesbitt Gibbs ’72 and Angela Brown Gilchrist ’72 had just integrated the campus two years earlier in 1967, with a few more black students enrolling the following year, including Eddie Ganaway ’71, the first black graduate of the College.

Gadson along with Nesbitt, Gilchrist and Audrey Dingle Cooper became the first black women to graduate from the College when they walked across the Cistern to receive their diplomas in 1972. 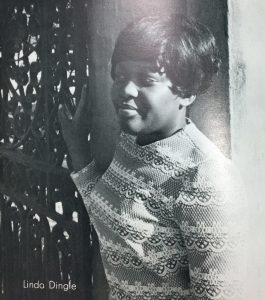 Linda Gadson in her senior portrait published in the 1972 College of Charleston yearbook.

“As I look back, I see God was stepping with me,” says Gadson, known fondly in the Charleston community as “Mother Gadson” and “Big Mama.” “He was right there for every move that I made.”

For Gadson, who was among the first people in her family to go to college, the decision to attend the College of Charleston was largely a pragmatic one. She first enrolled at South Carolina State University, a historically black university in Orangeburg, South Carolina. But when she had a baby at 19, Gadson left the school. She got an administrative job at the Medical University of South Carolina. As one of only a few black staff working in MUSC’s administration, Gadson got involved in the 1969 hospital strike, which aimed to address discriminatory practices at the institution, particularly against black workers.

That experience set the stage for Gadson’s interest in politics, activism and civil rights. At the encouragement of her sister, Marthenia, Gadson applied for and won a scholarship through the Eleanor Roosevelt Foundation, paving the way for her to enroll at CofC. Gadson wasn’t too worried about being one of the first students of color at the College, having already been a part of the integration of her high school in Hollywood, South Carolina.

So, when she got to campus, Gadson wasn’t afraid or intimidated by the racial climate of the times.

“I just wanted to be sure that I would make it academically,” she says, noting that she was determined not to be distracted by negativity or naysayers. “My mind was just focused on what I wanted to do in life.”

But it wasn’t easy living in two worlds simultaneously – one where she was a college student in a vibrant city and the other where she was an African-American woman living in poverty in a rural community. Her home life was challenging, as she and her family didn’t have plumbing in their home in the late 1960s and were still pumping water from an outdoor pump and hauling it in to use the toilet. And the 23 miles she had to drive from Hollywood each day to attend classes in her “old, raggedy car” was often fraught with uncertainty.

“I didn’t know whether or not I was going to make it to class from day to day,” Gadson recalls.

Admittedly, sometimes the juxtaposition between her home life and college life was jarring.

“I would go to school and go to the nice bathrooms and then go back home to this poverty,” she says. “I think that gave me more strength and more determination to say to myself ‘You’ve got to make it. You have no choice.’” 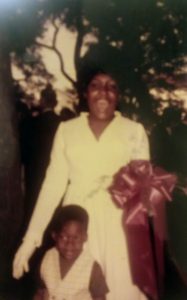 Linda Gadson at commencement in 1972 with her son, Reggie. (Photo provided)

As a political science major, Gadson hoped to become an attorney, with a goal of advocating on behalf of minorities and improving the lives of people in marginalized communities. She credits the support she received from the late Earl Kline, who was a political science professor during her time as a student, for shaping her passion for community activism. The relationship was so significant that Gadson remained in touch with her mentor long after graduation, and she still works with Kline’s wife, Eleanor, on community projects.

After graduation, Gadson began working at the nonprofit Rural Mission Incorporated on Johns Island, just off the coast of Charleston. She’s remained with the organization for nearly 47 years, rising to the role of executive director. Under her leadership, Rural Mission has worked to improve the lives of poor residents on Johns Island, Wadmalaw Island, Yonges Island and a portion of James Island through housing improvement projects, crisis assistance and intervention for families experiencing financial hardship, and a prayer group aimed at enhancing fellowship and support among community members.

“I’ve seen a lot of kids who came through Rural Mission who have gone on to become missionaries, pastors, lawyers and mayors,” says Gadson, whose legendary prayer room in her Hollywood, South Carolina, home has been the site of many an answered prayer. “It has been a blessing.”

In 1997, Gadson was honored in the Black Women In Sisterhood for Action (BISA) Calendar, alongside such luminaries as Rosa Parks, Winnie Mandela, Cicely Tyson and Maya Angelou. The BISA Calendar honors women from across the globe for their contributions in the areas of politics, religion, education, humanitarianism and philanthropy. In 2010, Gadson was awarded the South Carolina Order of the Palmetto, the highest civilian honor awarded by the governor of South Carolina to recognize citizens who have made significant contributions to the state.

As Black History Month comes to a close, Gadson is humbled by the support she received from her family that allowed her to be among the first black women to graduate from the College.

“I just wanted to be one of those people who could try to make things right in the world,” she says. “My grandmother instilled that in me. She always said to me, ‘Never allow anybody to make you feel less than you are.’ She only had a third grade education, but when I look back and see all the things my grandmother went through and how she was able to take care of all her children, grandchildren and a few great-grands, it just gave me strength.”