Pickleball: CofC Makes a Sport of It 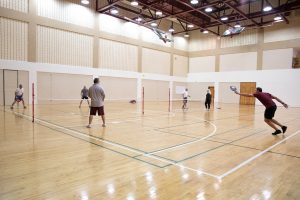 Faculty and staff get together on Wednesdays at noon to play pickleball. (Photos by Heather Moran)

Take a whiffle ball, a couple of paddles the size of dinner plates and a badminton net and what to you get? Pickleball. That’s right. What began out of happenstance late one summer afternoon in 1965 at the home of a U.S. congressman has become a big hit on campus with faculty, staff and students.

Pickleball (we’ll get to the name origin in just a bit) is best described as a hybrid sport that’s part tennis, part pingpong and part badminton. It’s played in all 50 states on courts that are roughly a third the size of a standard tennis court. And if you stroll through the College’s F. Mitchell Johnson Physical Education Center any Wednesday at noon, you’ll see what it’s all about. Faculty, staff and students from all across campus will be walloping brightly colored whiffle balls back and forth over a waist-high net. 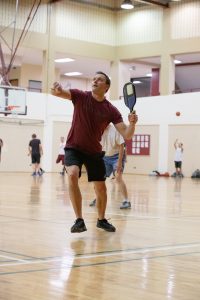 Among the players you’re likely to see will be Chris Whelpley, an associate professor in the Department of Marketing and Management, and Jon Hakkila, a professor in the Department of Physics and Astronomy and associate dean of the Graduate School, University of Charleston, South Carolina. Both have become aficionados of the game and Wednesday afternoon regulars. For both, that started almost three years ago, when Campus Recreation Services (CRS) first began offering this noon-time diversion.

“I’ve played a few times with my parents,” Whelpley explains, “but you shouldn’t get the idea that this is just a retirement-community sport. It’s very good exercise and the way the College orchestrates it, part of the appeal is the camaraderie. I’d say playing pickleball at noon is really a good way to meet people across campus.”

Whelpley, who played tennis in his youth, insists that pickleball is easy to learn.

“It doesn’t require a high level of skill,” he says. “That aspect appears to be less important in pickleball than it is in other racket sports such as squash and tennis. I would say that pickleball is good for anyone who likes racket sports. It’s not as demanding as some of those sports and it’s just plain fun.”

Easton Thomas, a junior who is member of the College’s men’s tennis team, concurs. He’s been playing pickleball since he was in middle school and actually enjoys it more than tennis. 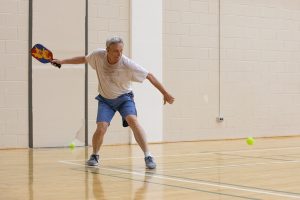 “If I could get recruited to play pickleball on the collegiate level, I’d definitely do that,” Thomas says. “I try to get down to the Johnson Center to play about twice a month, and I always bring a couple of my tennis teammates. It’s really fun, and I think it complements my tennis because it can help you hone your strategy for doubles.”

Curiously, pickleball as a phenomenon almost didn’t happen at the College. CRS director Gene Sessoms says that he was initially opposed to the idea when his colleagues in the Department of Health and Human Performance, Tom Carroll and Scooter Barnette, suggested it.

“I was dead set against it,” says Sessoms, “and I was dead wrong. We were renovating the squash courts at the time, so it was incumbent upon us to devise another racket sport for our recreation classes. I was thinking pingpong, but Tom and Scooter were resolute. They encouraged me to offer pickleball. They said it would be fun, and – what do you know? – it was! And it is. People really like it.” 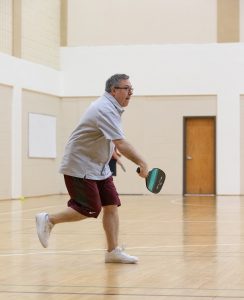 Professor Vince Benigni from the Department of Communication is another convert. He got involved early on, when Sessoms said to him, “Get eight people to commit to playing at noon, and I’ll make sure that the courts are set up then.”

“Pickleball is a great sport for all ages and skill levels,” Benigni says. “It involves strategy, touch and teamwork. I don’t know of anyone who has tried playing it that really didn’t enjoy it. For me, when Gene mentioned the opportunity, I was beginning to realize that I missed playing a recreational sport with colleagues. I was getting a little too old – and frail – to play basketball. And pickleball is an easy sport to pick up. You can just show up on a Wednesday and jump right in, playing singles or doubles. Now I really enjoy getting together with friends to play, and it’s a decent workout as well.”

And how did that name pickleball come about? Well, it seems that the aforementioned congressman had a cocker spaniel named Pickles who used to chase errant balls when the sport was being invented. Needless to say, the congressman and his friends didn’t look too far to find a label for their brainchild.

Pickleball: Give it a try!