You may not know Tommy Glasgow ’11, but if you follow the College of Charleston’s men’s basketball team, you probably know of him.

Glasgow is the brains behind Holy City Hoops, a podcast and blog dedicated to the men’s basketball team. You might consider Glasgow one of the program’s super-fans. He’s been following the team closely since stepping on campus as a freshman, with his blog growing out of a class project.

Now, a full-time public relations professional in Washington, D.C., Glasgow still carves out time for Cougar basketball. The College Today caught up with him ahead of the Colonial Athletic Association Men’s Basketball Championship tournament to find out more about this labor of love. 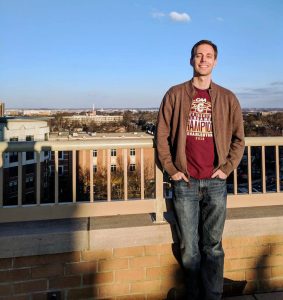 Tommy Glasgow started Holy City Hoops as a project as a student at CofC. (Photos provided)

How did you get started with Holy City Hoops?

I was a business administration major, and took an introductory public relations class with professor Amanda Ruth-McSwain. One of our assignments was to start a blog on a subject of our choice, and I chose the men’s basketball team. At the time, team-specific sports blogs written by fans were starting to pop up, and I always thought Charleston basketball deserved one of its own. That class assignment was the nudge I needed to get started.

The original blog was pretty basic by today’s standards, but I had so much fun writing about the Cougs and the various eccentricities of mid-major basketball that I kept up with it as a hobby even after graduation. For me, it was a great way to stay connected with the College, and I started to discover the full extent of the CofC fan community.

Eventually, the blog opened up some other writing opportunities and introduced me to some other like-minded college basketball fans. Not only that, but maintaining a website, finding your voice as a writer, growing a social media presence, all of that actually proved beneficial to my career in PR and digital marketing.

When did you branch out and start producing podcasts as well?

Podcasting as a medium started to interest me over the past year or so. It just seems to lend itself well to game discussions, analysis, interviews and everything else that sports fans consume in their media.

While I was considering podcasts, I witnessed some 8,000 fans pack the North Charleston Coliseum last spring to see the Cougars clinch their first return trip to the NCAA Tournament in 19 years and the lightbulb kind of went off for me. I knew there was an audience for this type of thing. I also traveled out to San Diego for the Cougs’ NCAA Tournament game and got to hang out with the hundreds of Cougar fans in attendance. All of that just reinforced how strong our fan base is, so I decided to start an accompanying podcast.

Do you have a sense of how many listeners you have?

When we hit 1,000 downloads on the podcast, I thought, OK this is something that can catch on. The athletics department has been really supportive of the entire project and I’ve been fortunate to have coaches, former players and other CofC fans come on the show to chat.

You’re also active on Twitter and Instagram. How long have you been on those platforms with Holy City Hoops?

Just since the beginning of the current season. Of course, I’ve been tweeting about CofC basketball for a couple years. If you’re a basketball fan, you have to be on Twitter. It’s like a second screen-viewing experience. That’s where you’ll find instant highlights, breaking news, rumors, basically everything you need.

So, where does your content characteristically come from? Do you chat with Coach Grant or any of his assistants during the season, or do you rely on other sources?

Coach Grant was kind enough to let me interview him at the beginning of each of the past two seasons. The content on the blog consists mostly of my observations, and those of the other writers who contribute to the site (who are a huge help). We try to offer something more than your typical summary of who scored how many points, what the post-game quotes were, etc. Whether that’s some extra analysis or insight, a sense of humor, or just good old fandom, I think it’s something unique.

What do you find special about Cougar basketball?

The fact that Charleston men’s basketball has one of the highest winning percentages of any Division I school is pretty outstanding. The program is a perennial winner despite maybe not getting the accolades of bigger schools. When CofC basketball is rolling, the whole city gets behind them.

Maybe most importantly, I think it’s the enormous pride that CofC students and alumni feel for the school and the city. Watching March Madness and seeing “Charleston” across the chest of the players on one of the biggest stages in sports is something that definitely rallies everyone associated with the school.

What’s the most fun for you regarding this role you’ve carved out for yourself as the creator and voice of Holy City Hoops?

The support I’ve gotten from other fans has been awesome. Folks who were strangers a couple months ago now are friends who will chime in either on the podcast or through social media. People have messaged me to tell me how much they love the show, or ask if they can contribute in any way. And I’ve had more than a few people say something along the lines of “I’m so happy I found this.”

OK, to put you on the spot, any CAA tournament predictions?

Well obviously I’m a little biased, but I’ll say the Cougars ride a home-court advantage and repeat as conference champs.