Two high school students who were surprised with scholarships covering their tuition to the College of Charleston on The Ellen Show on Monday, March 11, 2019, are among six students from Ashley Ridge High School’s Teacher Cadets program who will attend CofC in the fall of 2019. 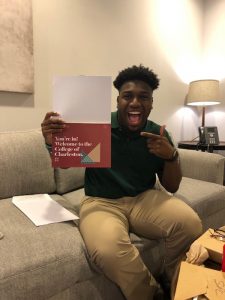 Jaheim President with his acceptance letter in the green room at ‘The Ellen Show.’ (Photos provided)

Darius Smith and Jaheim President appeared on The Ellen Show thinking they were going to talk about their goals of becoming teachers. Instead, host Ellen DeGeneres surprised President with his acceptance letter to CofC, and informed both students they would be receiving scholarships covering their tuition to the College.

Joining Smith and President at the College this fall will be fellow Ashley Ridge students Tatiana Brown, Kyle Fersner, DeMarr Proctor Floyd and Dennis Wright. The five male students, along with two more incoming freshman from other South Carolina high schools, will constitute the College’s largest ever cohort in the Call Me MISTER program, which supports male minority students who choose to major in education.

Anthony James ’12 (M.A.T.), director of minority education and outreach at the College who oversees the Call Me MISTER program, began working to recruit the incoming students last fall. James learned of the students’ interest in attending the College from their teacher, Victoria Merritt, who runs the Teacher Cadet program at Ashley Ridge.

“I went out to see them at Ashley Ridge and spoke with several teacher cadets,” says James, noting that he was struck by the students’ passion. “I went there to encourage them and inspire them, and I left inspired.”

Over the next several months, James continued to talk with several of the students, many of whom ultimately decided they wanted to come to CofC and participate in the Call Me MISTER program. James was so impressed with the Ashley Ridge students that he worked with administrators at Clemson University, which operates the Call Me MISTER program at the state level, to expand the number of students CofC could accept into the program for the 2019-2020 academic year. 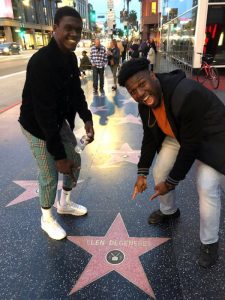 But prior to this week’s big announcement on The Ellen Show, Merritt had begun preparing President for the possibility that he might not get accepted to the College.

“We had started to talk about the fact that we needed to prepare for what we were going to do if he didn’t get in,” says Merritt.

Thankfully, they didn’t have to face that outcome.

“It was truly a once in a life time opportunity,” says President of his experience meeting Ellen DeGeneres. “I am glad that I had a chance to be on the show, but truly the best part was to be accepted into the College – the reason being is it is a lot of weight off of my mom’s shoulders!”

President and several of his teacher cadet classmates credit Merritt, who traveled to Los Angeles with President and Smith for the taping of The Ellen Show, for solidifying their interest in pursing careers in education.

“Mrs. Merritt showed us the passion and what teachers go through, because it really goes unseen,” says Floyd. “She really did show us that being an educator is an important profession.”

And how did the students get on the show’s radar to begin with?

Brown wrote The Ellen Show to draw attention to the lack of minority teachers in South Carolina and highlighted the passion of her classmates Smith and President. Brown credits Merritt and the teacher cadet program for opening  her eyes to the critical need for teachers, particularly minority teachers, in the Palmetto State. 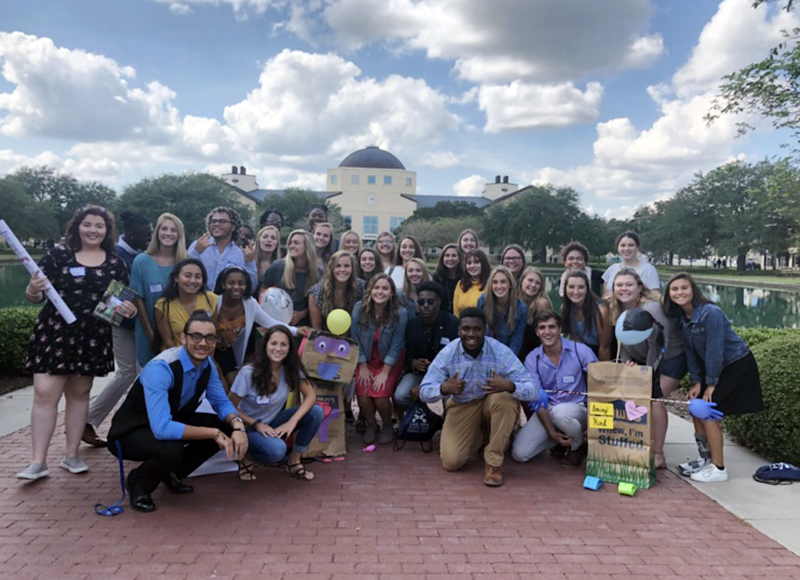 “Without this class and without her, I would have been completely blind,” says Brown, who plans to major in education at CofC. “It’s a serious issue.”

Smith says that perhaps the biggest impact from being on TV has been the influence he and President can have on younger students in their high school. He noted that two underclassmen that they didn’t know wanted to take photos with them after they returned to school this week.

“They thought we were cool enough to take pictures with us,” says Smith. “We went [to The Ellen Show] because we were ourselves and had a story just like everybody else. We showed them you don’t have to do something crazy or be something else to have the impact and opportunities we have.”