Visit any college campus on a beautiful spring afternoon and you’re apt to see frisbees flying over manicured lawns. This activity has been a staple of college life for nearly 70 years, and it’s definitely something you’ll see at the College of Charleston. Two decades ago, a handful of CofC students decided to make this casual recreation a lot more competitive. That’s when ultimate frisbee entered the Cougar landscape.

Eric Hartge ’02, along with fellow alumnus Justin Griffin ’02, co-founded the men’s ultimate frisbee team – known as the Palmetto Bums – in 1999. He and Griffin were co-captains that initial season, and Hartge remembers those days fondly.

“The early days started with most of us playing barefoot in Marion Square,” Hartge recalls. “We played in the early afternoons and within a few years, we shifted into a competitive team with cleats, jerseys and the ability to travel and challenge high-caliber teams from throughout the Southeast.” 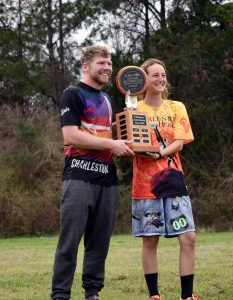 Students Jonah Price and Clara Meier were the first recipients of the Griffin Award. (Photos provided)

In February 2019, both the Palmetto Bums and the CofC women’s ultimate team, dubbed the Hobos, hosted a two-day ultimate collegiate tournament known as the Chucktown Throwdown at the College’s recreational fields on James Island. They’ve done this annually for the past 12 years, and this time around it was also an opportunity to celebrate the 20th anniversary of men’s ultimate frisbee at CofC.

“Every year,” explains Hartge who flew in from Northern California for the occasion, “the tournament is an opportunity for former CofC players to reconnect and celebrate together. This year, we had one of our largest-ever gatherings. As the team has grown over time, the alumni started discussing ways to make the event more important and foster a stronger connection between the current and former members of the teams.”

According to Hartge, this celebration was also a bittersweet occasion because the tournament organizers initiated a memorial award in honor of Griffin, who passed away in 2015.

“Justin had always been an adventurer who was more interested in the journey than the destination,” says Hartge. “His energy and passion were contagious, and he left a mark on everyone and everything he encountered. He was an accomplished mountain climber, and he was descending from an ascent of a 21,000-foot peak in the Nepalese Himalayas when he fell. Justin was tall, fast and he really was the heart of our team back when we all played in college. He was an adventurous soul, a loving father and husband, and a well-respected architect and builder in Bozeman, Montana.”

The Griffin Award, says Hartge, is presented to the team member that has continuously displayed a spirited passion for the game and an energetic commitment to the team.

“The recipient is the type of person that shapes a positive experience for fellow players on and off the field,” he says. “Fellow team members nominate and vote for candidates, so the award represents a shared honor and respect among peers.”

Hartge deemed the recent anniversary tournament “a memorable success,” adding “for me, it’s an honor to be a part of creating legacies at CofC. It was poignant that Justin’s parents, Bill and Mary Ann, drove down from Kentucky for the award ceremony and to share their memories.”

The College’s ultimate frisbee community selected students Jonah Price, a senior majoring in finance, and Clara Meier, a junior majoring in geology, as the first recipients of the Griffin Award.

“When we awarded the Griffin Memorial Trophy to Jonah and Clara, there were about 80 people from the Charleston ultimate community in attendance,” says Hartge. “It was very moving with lots of cheers and tears from most everyone.”