Early last year, the Charleston Area Bee Keepers Association (CABA) was searching for a location for its educational apiary when the former program coordinator of the College’s graduate program in environmental and sustainability studies contacted CABA about providing honeybees for the Student Garden at the College of Charleston at Stono Preserve, located 17 miles south of the College’s main campus. 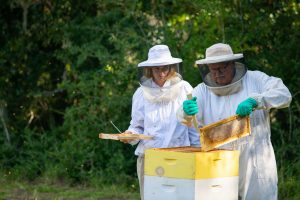 Rebecca Fanning works with a Charleston Area Bee Keepers Association member to inspect a hive at the student garden. (Photos by Mike Ledford)

CABA set up five hives on the 953-acre property about a half-mile from the garden, which was funded with seed money – both literally and figuratively – given to the CofC Foundation from the Golden Pearl Foundation, a North Carolina charity that provides grants to support the arts, youth and environment. It all dovetails perfectly with the College’s sustainability literacy initiative.

“The magnificent beauty of the Stono River property, coupled with the unbounded possibilities to provide opportunities for the College and the community at large, were a perfect fit for the Golden Pearl Foundation,” says Heidi Hall-Jones, Golden Pearl’s president of the board. “It has been incredibly meaningful to watch the progress unfold on the property and meet many extraordinary students and staff. We believe the Stono River property will play an important role in the Charleston community and beyond, and we are honored to be able to support such a remarkable place.”

“It has been received very well by the members, and we look forward to a long-term relationship with CofC,” says Larry Haigh, a past president of CABA who is managing the apiaries and overseeing the apprentice program. “The bees are active all over the property, including the gardens and the woodlands. The location is a stunning jewel of beauty and natural diversity.”

RELATED: Read about how the student garden donates lettuce to sea turtles at the South Carolina Aquarium.

The three-year agreement between CABA and CofC includes training two apprentice beekeepers and holding educational events. “The clear intent of John Henry Dick in leaving the Stono River property to the Foundation was two-fold: to manage, preserve and protect it as a wildlife sanctuary, and to use the site as an educational platform,” says Barney Holt ’74, director of property management for institutional advancement at the College. “The Student Garden is a perfect example of these charges, and the bee colonization program is a natural extension of their work.”

Rebecca Fanning, who is pursuing a double master’s in environmental studies and public administration, was the first apprentice and has helped identify curriculum objectives – like how to pick a bee off your beekeeping suit by its wings – that could strengthen the program. 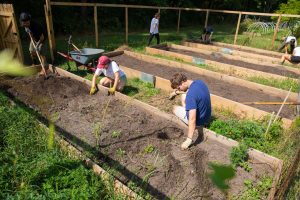 Students work on the Student Garden at Stono River Preserve.

“The learning curve is pretty steep for beekeeping,” says Fanning, who earned her undergraduate degree in Russian studies at Bard College in New York’s Hudson Valley. “When you make mistakes, it doesn’t feel too good because you have several thousand really upset bees to account for. It takes a lot of confidence. If you don’t know what you’re doing, the bees pick up on it. It’s just really nice to have that mentor with you to bring the stress level down.”

The two-acre garden is a little less stressful, although growing 20 or so different varieties of vegetables does have its challenges.

The bees have bolstered Fanning’s conviction for the importance of using organic farming practices. For example, the farm turned down free zucchini plants from Clemson Cooperative Extension this summer because the seeds had been coated with fungicides – compounds that can be dangerous to bees that have also been exposed to other chemicals, like pesticides to control mosquito populations.

Notes Fanning: “We wouldn’t have been sensitive to that issue if we hadn’t been researching honeybee population declines in order to keep our bees safe.”

Native pollinators like bumblebees and butterflies also play a role, so Fanning is in the process of installing a three-acre pollinator meadow for them. And there will soon be a deer fence, which the Golden Pearl Foundation is also funding, around all five acres so students can put more time into what goes into the ground and less time into what crosses the fence.

The College donates most of the vegetables to people in need of fresh produce through charities like Fields to Families. In the fall of 2018, the vegetables ended up in soups cooked by the Stone Soup Collective, a nonprofit student group that’s part of the College’s new food insecurity initiative.

After all, symbiosis is most beautiful when it’s between nature and people.