The United States and Ireland share a long and enduring history. That rich and complex history will be the focus of a talk this Tuesday, April 9, 2019, when the Irish Ambassador to the U.S., Daniel Mulhall, visits the College of Charleston and gives a lecture courtesy of the College’s Irish and Irish American Studies Program. 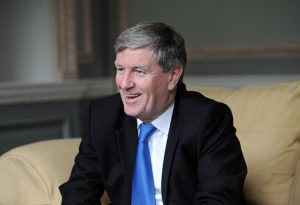 The talk, titled “Declaring Independence: America 1776, Ireland 1919,” will compare each nation’s journey to sovereignty. According to professor Joe Kelly, who directs the Irish and Irish American Studies Program, Ambassador Mulhall’s talk will take place at 3:15 p.m. in Wells Fargo Auditorium in the Beatty Center.

Kelly says that Mulhall is also willing to entertain questions regarding Brexit, the UK’s pending divorce from the European Union.

“He has a truly unique perspective on that entire scenario,” Kelly says. “There are very few people better versed in that perplexing scenario than he because Mulhall was Ireland’s ambassador to the U.K. when the initial Brexit vote was taken in 2016. It’s extremely fortunate that the College is able to bring him to Charleston at this particular moment to offer his talk and share his understanding of such an important happening in the world.”

The talk is free and open to the public.