The College’s Sustainability Literacy Institute will be winding up its  programming with an engaging lecture by two-time vice presidential candidate and renowned environmental activist Winona LaDuke. LaDuke will give her talk titled “Taking Action for the Environment: Be the Person Your Ancestors Would be Proud of” at Rita Liddy Hollings Science Center, room 101, at 4 p.m. on Wednesday, April 17, 2019. 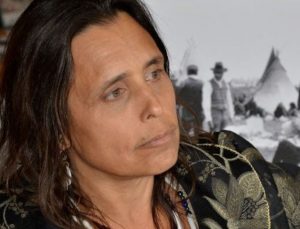 LaDuke, whose visit to campus is co-sponsored by the Women’s and Gender Studies Program as part of the College’s Year of Women celebration, is a well-known international speaker and writer, recognized for her prodigious activism on a number of important issues, including the Dakota Access Pipeline. She is the author of nearly a half dozen books, including Recovering the Sacred, and is currently the program director for a nonprofit organization called Honor the Earth.

A full-time resident of the White Earth Reservation in northern Minnesota, LaDuke works nationally and internationally on issues pertaining to climate change, renewable energy and environmental justice within indigenous communities. In her own community, she is the founder of the White Earth Land Recovery Project, one of the largest reservation-based nonprofit organizations in the country. She is also a leader in issues of culturally based sustainable development strategies. In this work, she has been influential in worldwide efforts to protect indigenous plants and heritage foods from patenting and genetic engineering.

A graduate of Harvard and Antioch Universities, LaDuke was inducted into the National Women’s Hall of Fame in 2007 in recognition of her leadership and community commitment. She has been awarded the Thomas Merton Award, Ms. Magazine Woman of the Year (with the Indigo Girls in l997) and the Reebok Human Rights Award. Her White Earth Land Recovery Project has also won awards, including the prestigious 2003 International Slow Food Award for Biodiversity, recognizing the organization’s work to protect wild rice from patenting and genetic engineering.

LaDuke is a former board member of Greenpeace USA and is presently an advisory board member for the Trust for Public Lands Native Lands Program, as well as a board member of the Christensen Fund. She twice ran for vice president of the United States as the running mate of Ralph Nader representing the Green Party.