College students can accumulate a lot of stuff.  A whole lot. That was abundantly clear over the past several weeks as the 3,200 or so undergraduates living on campus at the College of Charleston moved out of their residence halls, leaving behind clothes, furniture, appliances and so much more. All of it, apparently, unwanted.

Fortunately, staff members and students with the College’s Office of Sustainability (OoS) are aware of this annual phenomenon, which is characterized by truckloads of items left behind. Consequently, they’ve established a creative initiative to address the issue. For more than five years, they’ve worked to ensure that most everything useful among those items gets collected, sorted and repurposed instead of hauled off to Charleston County’s lone landfill.

Much of this year’s initiative, called Move-Out, was coordinated by adjunct professor of environmental and sustainability studies Jennifer Saunders. She’s the Zero Waste Program manager for OoS, but since it was Saunders’ first time directing this massive undertaking, Kaitlyn Amidon ‘18, her predecessor in that role, agreed to participate as a consultant.

“This kind of material waste is a huge problem in our society,” Saunders explains. “And it’s really hard for anyone to comprehend the massive volume of items that students leave behind. Though we’re still finalizing the data, we estimate that from each residence hall, we gathered at least enough items to fill the entire Stern Center Ballroom – from floor to ceiling. That’s right, one residence hall’s worth of stuff would fill that 4,200-square-foot room, so multiply that by seven because we have seven major residence halls on campus. And that doesn’t include all the broken and unusable items that had to go to the landfill.” 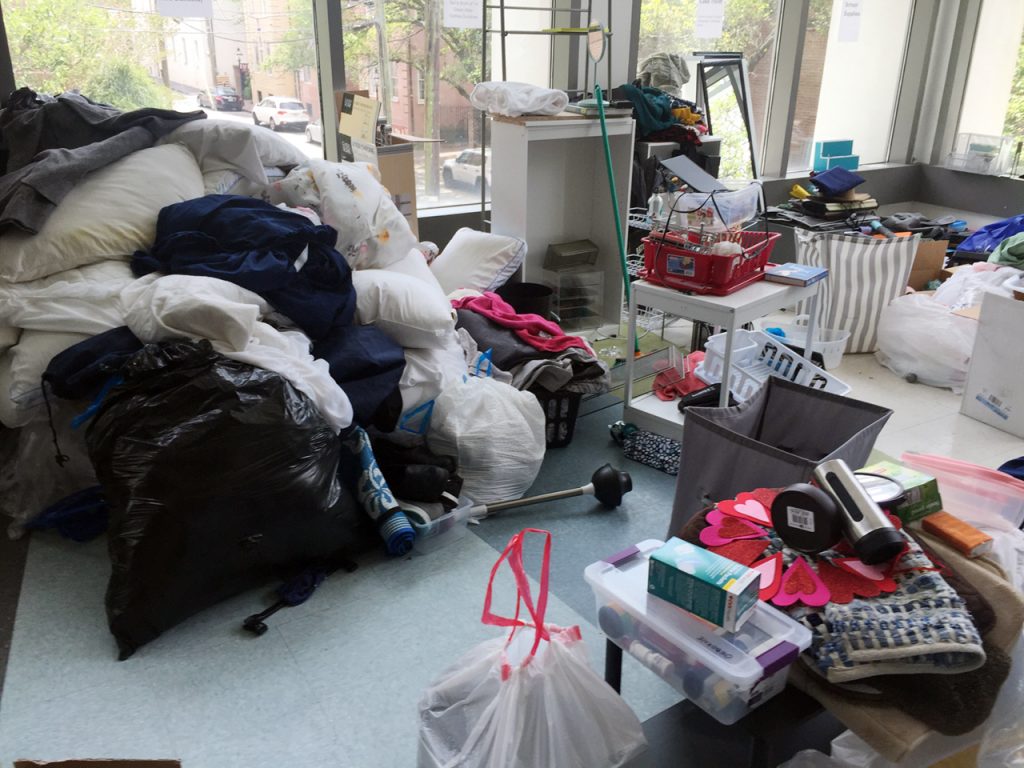 Saunders, several other professors and more than a dozen students who worked with them to conduct Move-Out this year started by establishing some critical partnerships within the community. They sourced large-scale donation bins from Palmetto Goodwill and worked with numerous area nonprofits to find outlets for most of the items they collected. For instance, some 75 box fans and 75 Swiffer mops were donated to Ansonborough House, a downtown residence facility for low-income senior citizens.

Adjunct professor Denise Fugo from the School of Business was instrumental in making connections with Ansonborough House. She’s very involved with the Charleston chapter of Meals on Wheels and also arranged for Move-Out to contribute items to Florence Crittenton Programs (a residential and training facility for at-risk young women) and the Joseph Floyd Manor (a low-rent public housing facility for elderly and disabled residents).

Kendall James, whose daughter Ginny attends the College, was another pivotal player. Her efforts in sorting items and transporting loads to the Homeless to Hope Furniture Warehouse were critical. Another partner in this massive undertaking was Charleston Mattress Company. According to Saunders, the company hauled away nearly 200 mattresses that would otherwise be clogging up the landfill. 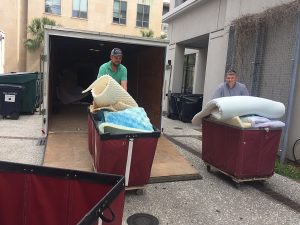 K.C. Rennie (left), co-owner of Charleston Mattress Company, and Brian Fisher of the Office of Sustainability, haul unused mattresses away as part of the Move-Out initiative.

“K.C. Rennie, the co-owner of Charleston Mattress, hauled those mattresses up to a facility in Pamplico, South Carolina, where 90 percent of that material is repurposed,” says Saunders. “Effectively, that amounted a $2,000 in-kind donation on his part.”

Move-Out’s volunteers also worked closely with several other partners such as We Are Family, a local nonprofit that advocates for and serves at-risk youth in the Charleston area. This organization runs a thrift shop, which was the beneficiary of many of the discarded clothes collected during Move-Out.

“We also set up our own pop-up thrift shop right in front of the OoS office on College Way,” Saunders adds. “A recent alumna, Eliza Bower ‘18, managed that, which ran from 11 in the morning to 3 in the afternoon every day of finals week. We weren’t really trying to make money, even though Move-Out is expensive – the mobile storage units alone cost $1,000 – we were just trying to find new homes for all those discarded items. That’s why anything with a CofC logo or the College’s name on it, we gave away for free.”

And another beneficiary of Move-Out was the Cougar Food Pantry.

“You wouldn’t believe all of the untouched food items that we recovered,” Saunders said. “With some 30 percent of our students impacted by food insecurity, it’s really important for us to offer these donations to the on-campus food pantry.”

And Brian Fisher concurs. As the director of the College’s Center of Sustainability, which oversees OoS and the Sustainability Literacy Institute, he says this year’s edition of Move-Out was by far the largest and the most sophisticated effort, both in terms of materials diverted from the landfill and hours put in by students.

“Making contributions to the many charities that we did and diverting so much from the landfill are both impressive,” he says. “But what’s truly impressive is the effort that the students put into this. Move-Out went on for 10 days and some of the students involved were putting in 12 hours a day! That tells you a lot about the massive volume of material we dealt with, but it tells you more about how engaged our students are.”

Both Saunders and Fisher say that future editions of Move-Out can be refined to become even more creative and efficient. Yet they also lament the initiative is necessary at all.

“The ideal solution,” Fisher says, “is to teach our students to be more conscious consumers. And we’re all doing that across campus. It’s part of what we’re attempting achieve with the College’s emphasis on sustainability literacy. This year’s initiative represents a significant step toward making Move-Out a Zero-Waste project and certainly the first at this scale. As we go forward, we need students to contribute in positive ways through conscious consumption, and faculty and staff to help us sell, repurpose and recycle discarded items. This needs to be a community effort that serves as a foundation for sustainability.”

Featured image: Student volunteers from the Office of Sustainability collected a mound of discarded mattress toppers.