Basketball is big in Charleston. At the College of Charleston, it’s the marquee sport. Given that, no one should be surprised that the College hosts a series of youth basketball camps throughout the summer.

Beginning in early June, the College’s recreational complex will be overrun with youngsters ranging in age from 6 to 16. In fact, during June, July and August, some 1,000 youth will be on campus dribbling, passing, shooting and generally honing their hoops skills.

For the past 10 years, Ashley Perrucci ‘98 has been the person organizing much of this camp activity. She’s the administrative assistant for the men’s and women’s basketball programs at the College.

“We take a serious approach to managing our basketball camps,” explains Perrucci. “We know that parents in this community have a wide range of choices regarding summer activities for their kids, and we’re grateful that they choose our camps and keep coming back year after year.” 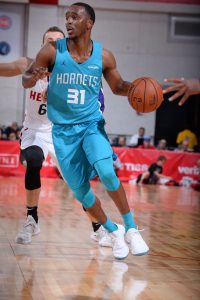 CofC Alum Joe Chealey, who spent the last season playing professionally with the Charlotte Hornets organization, will launch his own basketball camp at CofC later this summer.

According to Perrucci, five different kinds of basketball camps will take place this summer. Coach Earl Grant, head coach of the men’s basketball team, will run a three-day Junior Cougar Camp in early June, which will coincide with the first of his trio of four-day youth camps for kids ages 6 to 14. In late July, former Cougar basketball star Joe Chealey ‘18 will run his inaugural camp for boys. And then in early August, Grant will run a one-day camp for elite high school players. Usually, there are several girl’s camps each summer as well, Perrucci says, but since the College’s new women’s basketball coach Robin Harmony was just hired this spring, she’ll be running just one camp for elite high school players, which will take place Saturday, Aug. 3, 2019.

RELATED: Check out this comprehensive list of all the summer camps hosted at CofC.

Perrucci says that each of Grant’s camps are sold out with some 250 campers attending each four-day session. But she says there are still spaces available in Chealey’s camp.

“These camps are pretty important to our program in a number of ways,” Perrucci says. “They’re good for our men’s team members who serve as camp coaches because it enables them to connect with people in the community. They get to see and get to know some of their fans firsthand during the camps, unlike during the season when they’re focused on playing well. And Coach Grant is emphatic about those connections. He makes sure that we have an autograph and photo session with the kids and the coaches at the end of each camp.”

Associate Head Coach for the Cougars, J.D. Powell, concurs: “These camps allow us to present our program to the community. For us, the camps provide an important connection to Charleston. That’s one of the reasons why we teach our team members that they don’t just play for the College, they represent this community. That’s very important.”

As for Chealey’s camp, which will run from July 29 through Aug. 1, Chealey says that he has patterned it on the camps he’s most familiar with, including the ones run by Grant, where Chealey has previously worked several summers as a coach.

“It’s been a dream of mine for some time to offer a camp for kids,” Chealey explains. “After I was fortunate enough to become a professional player [he spent last season playing for the Charlotte Hornets], I knew I wanted to run a camp during the summer. I attended camp when I was a kid, and now that I’ve coached at camps and seen how much fun the kids have doing this, that has really motivated me to put this together.”

Chealey says he’ll be working hand-in-hand with Max Clevens ‘18 to run the camp. Clevens was formerly the head manager of the men’s basketball team at the College. Both he and Chealey hope to eventually expand their operation and run a camp in Orlando as well, Chealey’s hometown. But Charleston, Chealey says, holds a special place in his heart.

“Charleston is my second home. I really care about the kids in the community here,” he says. “For me, it’s a sense of pride to offer this camp. And I plan on having a few surprises for kids due to connections I’ve made in the NBA. But more than anything, I’m looking forward to passing along my knowledge and having friends that I know from the game do that as well. We’ll have high-level coaches at the camp and some of them will be players who were on the team when we won the CAA Championship in 2018.”