It’s Day Three of the Joe Chealey Basketball Camp at the College of Charleston. The camp’s namesake, Joe Chealey ’18 – the Cougar’s former star point guard who now plays professionally for the Charlotte Hornets – is in TD Arena supervising a group of older kids who are playing a five-on-five game.

Dressed in a Hornets T-shirt with matching teal basketball shorts and a white headband to keep his tightly curled locks off his forehead, Chealey is an active observer. He strolls the sideline, occasionally encouraging the players or correcting their form on the court. Demonstrating the same soft-spoken manner that he employed while directing his Cougar teammates during collegiate games, Chealey is steadily putting his imprimatur on this camp, which ran from July 29 to Aug. 1, 2019.

The College Today caught up with him during a lunch break to find out how his career is going and what his aspirations are for the camp. 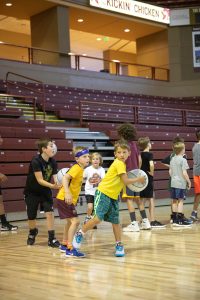 Campers practice their skills on the basketball court. (Photos by Heather Moran)

This is the first time you’ve run a basketball camp. How’s it going so far?

Good. We’ve got a great group of coaches who’ve had experience doing this for Anthony Johnson’s ’97 camp or [CofC men’s basketball] Coach Earl Grant’s camp. Some of them are current players from the College; some of them are former players like Evan Bailey ’18. We have a former women’s team member – Bree Bolden ’18 – and a couple of guys who I played with in high school. Also, my little brother is one of the coaches as well. We also have Max Clevens ’18 as our camp director. He spent five years as the head manager for the men’s basketball team here at the College. It’s important to have people who I can trust in these roles.

You said you purposely capped the camp’s enrollment at just 100 kids. Why?

We were intent on giving the campers as much attention as possible. Max and I decided that we’d like to be able to do a little bit more for each of them. So, we thought 100 was a good number for those purposes. We ended up letting a few more in on the final day of registration, so we’ve actually got 110 kids now. But that’s a good number. The ages run from 6 to 14, and we purposely gather all the kids together several times a day for discussions and other activities. You really can’t do that effectively if you’ve got more than 110 kids.

How did your major in business administration prepare you to run a basketball camp?

It helped in a number of ways. I have my own LLC, Journey Sports, which I formed just around the time that I graduated. The company is part of a long-term vision of mine to have a facility that can be a home for camps, such as this one, for kids to play basketball, but also a place that can offer year-round training for them in other sports as well. Maybe down the road it can offer daycare services, too. But the first part of the plan is to get my summertime day camps up and running, and then we’ll see where it goes from there.

Starting a company and getting this camp going, that’s definitely entrepreneurial. Has this always been part of your identity?

I don’t really know where that comes from. Perhaps it comes from my classes and experiences here at the College studying business, but I’ve always found it interesting. And for a long time, I’ve told myself that if I ever had the opportunity – if I had the platform – to impact kids, I would try to start a camp. When I was working at Coach Grant’s camps and AJ’s camps [Anthony Johnson] in the past, this idea took root. I said, if I ever have the recognition and the resources to establish a camp, I’d get it done.

And part of this is the opportunity to help support my friends. When I was here as a player, I worked in the camps during the summer and I know that income can be important. I always looked forward to camp weeks. You got to spend time with the kids, have that good influence on them and then at the end of the week, you got a nice paycheck. 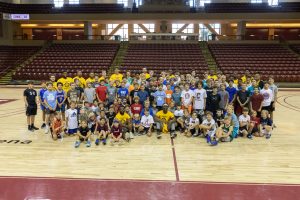 What do you hope the kids get out of your camp?

I want the kids to feel like they’re getting the attention they deserve and we’re able to do that because we restrict the number of kids who can participate. Due to the ratios we have [coaches to campers], the kids have a chance to develop more of a relationship with the coaches – and that counts for a lot. A lot of these kids will walk away after the camp is over and they’ll still be on social media with the coaches they got to know. Also, I want the kids to feel like they’re getting something special. Because I spent a year in the NBA, I’m able to offer some prizes like signed jerseys, stuff like that.

Each day, when we gather all the campers together in the same space, we’ll do a trivia contest like we did at lunch today or some other type of competition. Getting them all together like that brings energy to the camp and the kids feed off of that. I talk to the kids then and ask questions, and it’s clear that everybody is engaged. That’s one of the real advantages of limiting the registration to around 100 kids.

There was a moment during the older kids’ game on the arena court when one of the players did a quick spin move to get to the rim. You responded with an emphatic fist pump when he scored. Why?

Well, that’s what you want to see. I know that kid because he’s been at Coach Grant’s camps the past few years and two years ago he wasn’t doing that. He didn’t have the confidence to try that. That spin move was a big-time play and just seeing it got me excited. But I was also excited because it represented just what we want to see happening. We want these kids develop their potential and have strong relationships with the coaches. Hopefully a lot of them are like this kid in that they start with us at age 8 or 9 and keep coming back until they’re 14. For me and the coaches, that’s really satisfying. We know we’re making a difference.

What aspirations do you have for your camp? How would you like to see it evolve?

Hopefully, I can do a camp in Charleston each summer and I think the numbers will grow. We’d like to eventually get it to capacity, which I believe is 250 people based on what the facility can handle. I also hope to open up another camp in Orlando as well, which is where I’m from. My hope is that in the next couple of years, I’ll have two camps going on in the summer. Ideally, we’re here to do this for a long time. I tell a lot of people that Charleston is my home away from home. It’s a special place to me.

The word on the internet is that you just signed a contract with the Charlotte Hornets for the coming NBA season, is that true?

Well, we’re still ironing out the details, but I plan to be with Charlotte this coming year. I’m definitely excited about that. [*Editors Note: On Aug. 6, 2019, the Hornets announced Chealey had signed a contract with the team.]

So, do you still follow the Cougars, your former team?

Of course. I’m excited for the team. Grant Riller is coming back and I expect him to be the floor leader; it’s his senior year. And you’ve got a lot of young guys on the team now who I’ve been able to play against in pickup game since I’ve been in town. I think the Cougs have a strong chance to do really well. I think we’ll be OK this season.