Model Students: Meet Six Freshmen from the Class of 2023

This month, more than 2,000 new students from around the country and around the world will be starting at the College of Charleston – the Class of 2023. This first-year cohort is made up of individuals from 44 U.S. states as well as Australia, Brazil, the Bahamas, Denmark, Germany, the Netherlands, Panama, Sweden and the United Kingdom.

Among this new crowd are 18 valedictorians and eight sets of twins. To give you an idea of who some of the members of the Class of 2023 are, here’s a sampling of a few of them:

Grace Powell, center, with her U.S. 18U futsal teammates.

Meet Grace Powell from Daniel Island, South Carolina. She spent her high school career doing the things most high school students do – studying, volunteering, playing sports and hanging out with her friends. But that’s only part of her story.

For the past three years, Powell has been playing futsal on the international level. Futsal is a hybrid of soccer that’s played indoors on a hard surface with a slightly smaller ball and only five people on a team. This summer, she was a member of the U.S. 18U futsal team. As the team’s goalkeeper for the past three summers, she has traveled around North and South America to compete.

In early August, she and the U.S. team played three matches in Argentina. Two summers ago, Powell represented the U.S. in a tournament played in Medellin, Colombia (the team finished 3-0), and during the summer of 2018, she traveled with the team to compete in a tournament held in Costa Rica.

At the College, Powell will be an Honors College student and plans to major in biology. She’ll also be playing on the women’s soccer team, which will require an important transition.

“I play goalie in futsal, but in soccer, I’m a forward, so I’ll have to make the adjustment,” she says. 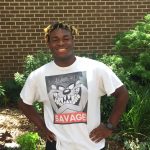 Nonetheless, Powell says she’s excited to start practicing and playing with the team – and taking classes. “I can’t wait. I know it will be a good experience.”

And maybe you’ve already met Darius Ledbetter. Outgoing, upbeat and perpetually active, he’s from Monroe, North Carolina, a small town not far from Charlotte. Ledbetter spent part of his summer on campus getting to know the College and says he’s excited to start classes this semester.

“This is where I’m supposed to be,” he says.

A three-sport athlete in high school (track, basketball and football), Ledbetter plans to study marine biology. In fact, he’s passionate about that topic. He says that the natural world really appeals to him, and he’s hoping to get involved in ocean clean-up initiatives.

“I want to approach marine biology on an academic level, for sure,” he explains, “but I also want to be hands-on. Ocean pollution is a huge topic and a big challenge for society. I’ve been thinking that I might even start a student club or an organization focused on ocean conservation. That’s one of the big draws for me here at the College. There are so many opportunities. You can start your own club or organization. I mean, I want to get involved in so many things and do everything that I can. That’s why I like it here.” 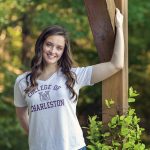 And then there’s Adair Klapow from Birmingham, Alabama. She opted to attend the College because she was seeking a small-to-mid-sized, liberal arts institution in a progressive city.

“I grew up in a community where everyone is very similar,” she says, “and we all know each other. I wanted a change and the College fits that bill for me.”

Like Ledbetter, Klapow played basketball throughout high school, but she also worked as a member of her school’s Show Choir Tech Crew.

“We were the backstage production management for our school’s two show choirs,” she explains. “We were in charge of loading trucks with equipment for competitions, setting the stage, moving props and quick-changing performers during the performance. Afterward, we took each of the sets apart. I enjoyed the thrill of competitions when you have two minutes to set the entire stage, perform for 20 minutes and then take the set apart in under two minutes.”

Her true passion, she says, is working with youngsters who don’t know how to swim and teaching them to be proficient in the water. For the past three years, she and her brother have managed an academy they established that teaches children ages 1 to 8 to progress from not wanting to be in the pool to swimming laps.

“Teaching swimming has helped me to become more creative, flexible and patient, since I work with kids who have very different fears and learning styles,” she says.

At the College, Klapow hopes to prepare herself for a career in occupational therapy.

“My experience in teaching swimming and doing community outreach has helped me realize that I want a career where I get to help people directly,” she says. “I want to help people improve their quality of life through regaining old skills and mastering new ones.”

And speaking of mastering skills, Noah and Will Williams from Myrtle Beach, South Carolina, are all about that. These twins are both accomplished artists who graduated from the Academy of Arts, Sciences and Mathematics. They’re both members of the National Honors Society as well.

Both Williams brothers began creating artwork at an early age, and last spring they both presented pieces at ArtFields, an annual juried exhibition in Lake City, South Carolina, open to artists from the Southeastern region.

Will painted a 5-by-5 portrait of a fellow student at his school, which won third place in its division. And Noah created a multi-part sculpture that was inspired by the stained glass windows he’s seen in churches around the South. He won the Merit Award at Art Fields for his creation.

Will, who also has a photography business, says, “I’ve always wanted the message behind my artwork to come from a completely genuine perspective and I’ve always believed artwork should be the platform that you use for activism.”

And Noah has a slightly different outlook: “Whether I’m telling the stories of my friends or my own story or telling stories that can resonate with different audiences, I always think that telling a story has been my big inspiration.”

Though neither Will nor Noah has plans to major in studio art, they each say they’ll continue to create artwork during their time at the College. 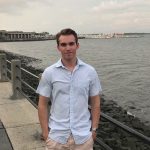 And finally, there’s Troy Brennan, from Allegany, New York, a small town in the western section of the state. Initially uncertain about going to college so far from home, Brennan says he made connections through the computer science department over the summer and that’s been a difference maker for him.

“I’m participating in the Paradigm Shift Global Hackathon (through the CofC Honors Hub) and so are a few other incoming students,” he says. “That has enabled us to get to know each other online, but it also connects you with professors and student mentors.”

At the College, Brennan intends to study Russian and cybersecurity. He says his long-term goal is to establish his own cybersecurity firm.

“In today’s age,” he says, “cyber attacks happen everywhere, from an invasion of a personal account to the breach of an entire company. I think it’s important that students have the ability to combat these types of attacks.”

Ultimately, Brennan aspires to be a citizen-scholar.

“People such as myself who have certain skills can teach others how to protect themselves, teach them to recognize a threat, and educate them regarding what to do about their online security so that they can protect their company or just their personal data,” he says. “And students with a liberal arts and sciences background who do this will have a real advantage. That’s where I see myself going.”