Symposium to Examine the Architectures of Slavery

So much of what we know about slavery comes from spoken and written stories in books, movies, lectures and historic documents, while the actual, physical evidence is often hidden from view. Once we look below the surface, however, we discover markers such as the ruined remains of a prison or a rice mill, a hand-cut mark in an old roof beam or a fingerprint of an enslaved laborer in a brick of an historic building. Once you see a fingerprint in a single brick for what it truly is, all of the great old buildings that make up our College, our city and our nation begin to tell you stories about slavery – stories that are not over in a nation still grappling with the long-term effects of slavery and the racism that accompanied it. 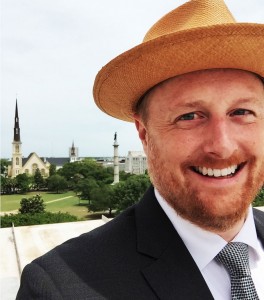 Nathaniel Walker, assistant professor of architectural history and co-organizer of the symposium.

The architectures of slavery and its legacies will be explored in a symposium hosted by the College of Charleston’s Department of Art and Architectural History on Oct. 24-26, 2019. The symposium, titled “Architectures of Slavery: Ruins & Reconstruction,” will bring together scholars from across the country and beyond to discuss the places and times in which slavery was a legal institution and analyze the long-enduring memories of slavery in architecture, urbanism and landscapes. The symposium is free and open to the public.

“As the result of its place in the transatlantic slave trade, Charleston can make a legitimate claim to being the birthplace of African America, but for the bulk of the city’s history, African Americans’ stories have not been told,” says English Professor Simon Lewis, who is among several CofC professors participating in discussion sessions at the symposium. “That serious amnesia is currently being addressed both by academic and public historians in a process that has been drawing more and more national and international attention. This month alone, several important events are addressing these issues, and this conference on the architecture of slavery will draw attention to the absolute importance of Charleston as a center of African American Studies.”

RELATED: Learn about a new documentary being produced by CofC faculty that examines how enslaved Africans contributed to the construction of College buildings and surrounding sites.

Keynote speaker Dell Upton, professor emeritus of architecture, UC Berkeley and professor and chair of art history at UCLA, will present a lecture on Thursday, Oct. 24, at 5:30 p.m. in the School of Education, Health, and Human Performance Alumni Center titled “Constructing a New South: Race, Respectability, & Aspiration in the Post-Emancipation Landscape.” Upton has a longstanding interest in African American history, architecture and material culture, and the landscapes of slavery. In recent years, he has expanded his research to the urban and rural landscapes of the post-emancipation period. His latest book, What Can and Can’t Be Said: Race, Uplift, and Monument Building in the Contemporary South, features a detailed discussion of South Carolina’s recent attempts to create monuments to honor African American history, including the 2001 African-American History Monument located yards away from South Carolina’s Confederate Monument.

Rhondda Robinson Thomas, Calhoun Lemon Professor of Literature at Clemson University, will hold a special roundtable discussion on slavery and its legacies in the making of South Carolina colleges and universities on Friday, Oct. 25, from 12:45-2 p.m. in the Simons Center for the Arts, room 309.

Washington Fajardo, architect, urban designer, and Harvard 2019 Loeb Fellow will deliver the Plenary Lecture on Friday, Oct. 25, at 5:45 p.m. in the Simons Center for the Arts, room 309. Fajardo was the special advisor to the Mayor of Rio de Janeiro, Brazil during the city’s preparations for the 2016 Summer Olympics. As part of the preparation, he excavated and preserved Valango Wharf, the site where approximately one million enslaved Africans entered Brazil. Fajardo helped to establish the wharf as a UNESCO World Heritage Site in 2017.

“Fajardo asserts that confronting the legacy of slavery means working to empower the descendants of the enslaved today,” says Nathaniel Walker, assistant professor of architectural history at the College and co-organizer of the symposium.

Following a series of discussion sessions on Saturday, Oct. 26, a walking tour of several of Charleston’s most critical sites of slavery will be held from 2:30-4:30 p.m.

For a full list of symposium events, check out the “Architectures of Slavery: Ruins & Reconstruction” program.