Houston, a music performance major who was featured with the Charleston Jazz Orchestra this past spring, is one of five cast members starring in Forbidden Broadway: The Next Generation, a musical send-up of Broadway classics such as Oklahoma, Les Miserables and the wildly popular Hamilton. The New York Times published a favorable review of the show last month. Forbidden Broadway: The Next Generation was initially performed at the Triad Theater in New York City through Dec. 1, 2019. The show will re-open at the York Theater Company for an extended run Jan. 15-Feb. 9, 2020.

Houston’s role in the show represents a huge break for a young actor-performer who has just begun trying to establish himself in the New York theater scene. The College Today caught up with Houston to learn how he made the jump from stage performer at Disney World in Orlando to the bright lights of Broadway, well, off-Broadway, actually.

What drew you to the Big Apple?

I’ve always been pretty gung-ho about going after my dreams. Acting on Broadway is a big goal of mine. And staying in Orlando wasn’t going to get me there, so I knew I had to leave. Last summer, I simply bought a one-way ticket to New York and two days later I took the plunge. 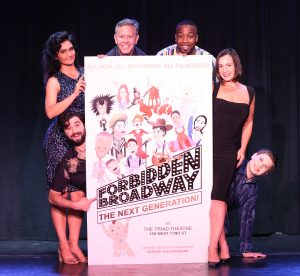 How did you end up in the cast of Forbidden Broadway?

As soon as I got here, I started going to open calls for various shows. I just kept putting myself out there and about three weeks into that process I did an audition for a show. The organizers didn’t tell us what show it was or anything about it. So, I walked in resolved to give it my best. They asked about me and my dreams and then asked me to sing a song, so I did that.

A few days later, I got an email asking me to come back for a follow-up audition.

They called me in two more times after that to do impersonations, which was way out of my wheelhouse, but something must have worked. Toward the end of August, the casting director called and said that he wanted to go forward with me. At the time, I was supposed to be preparing for a show in Charleston at Pure Theatre, but the director there was really understanding. Everyone in the arts community in Charleston has watched me grow up so she said, ‘Go, chase your dreams.’

Doing Forbidden Broadway is a huge break for me. I was wowed when they called. This show is really an institution in the New York theater world. It’s been performed off and on since the         mid-1980s. The theater community here really respects the show. The spoofs we do are more entertaining than offensive, and that alone takes a lot of skill and timing and sensitivity. I knew about Forbidden Broadway growing up, so to perform in it now is life-changing for me. I’m really humbled by this opportunity.

Can you describe the role you have in Forbidden Broadway?

There are five people in the cast. We’re all performers. We all sing. In one scene, I impersonate Billy Porter, who became famous for his work in Kinky Boots, and I poke fun at André De Shields from The Wiz and Ain’t Misbehavin’. I also poke fun at legendary singer Jennifer Holliday. Moments like that are really what comprise this show.

For me, it’s so much fun acting in this production, but it’s not just about spoofing other people’s work. It’s really about finding joy in the theater world that we can all appreciate. If you’re up to date on theater in this city, you know that the current run of Oklahoma is really a pretty dark version of that show. Daniel Fish is the director, and I love his adaptation, but it’s somewhat bizarre. So, we spoof that in particular in our show with a number called “Woke-lahoma!” Part of the magic is that we all love his show, and we also poke fun at it at the same time.

How do you balance the work with the other pressures of being an actor in New York?

When I first moved up here, a good friend told me that in this business, you’re always in between jobs. And that’s true. At the moment, I’m doing this all on my own. I don’t have an agent. That’s actually one of my next goals. So, I have to be out early in the morning every day going to auditions and open calls. I’m still very, very new to the theater scene here and I know how fortunate I was to get this role with Forbidden Broadway. I always keep it in the back of my head that I’m just at step No. 1. I have to keep pushing myself out there.

Aside from acting and performing, you also write and play music; what’s the next project up your sleeve?

As I go about auditioning for other shows, I’m also getting ready to reprise a show I did for Piccolo Spoleto in 2017. It’s called Take me to Church. We’ll be staging it here in New York in February. In this piece, I take classic Broadway tunes and render them as gospel numbers. So, what I envision is a full Broadway church service with actors performing the sermons and a big gospel choir singing, backed up by a full band. In 2017, we presented a really scaled down version at the City Gallery. At the moment, we’re looking for the right venue and a producer.

Feature photo: Manny Houston is pictured on the right performing in ‘Forbidden Broadway.’