Where in the world did Prentice “Tripp” Brower III ’12 and Zach Bjur ’12 spend the holidays? It’s an apt question because these intrepid College of Charleston alums could be almost anywhere on the world’s oceans right now. Literally.

In early November, the duo departed Charleston on a globe-girdling adventure. Their plan is to spend two years voyaging around the planet on board a 40-foot sailboat that they’ve leased for this purpose. The first leg of their journey took them to Bermuda, where they spent a week. Then they made a 1,000-mile passage south to the island nation of Antigua in the Caribbean. Since arriving there, they’ve spent the past several weeks sailing from island to island in the Lesser Antilles archipelago. 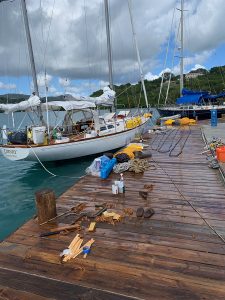 “When we came up with this idea,” explains Brower, who majored in political science, “we knew it was now or never. If we didn’t follow our dreams and have this big adventure now, we’d probably never have the same chance again. We’re both young and basically have the latitude to step away from the other parts of our lives and do something like this.”

That initial six-and-a-half-day sail to Bermuda was an important shakedown.

“We had some strong weather and consequently broke some equipment on board during that leg,” says Bjur, who majored in political science and biology. “But we were able to get most everything back into working order during our layover.”

The second leg of their journey – from Bermuda to Antigua – took another seven days. And Brower described that trip as a beautiful sail.

“Except for the first day, we had wonderful weather with the wind just where we needed it,” he says. “We had to skirt Tropical Storm Sebastian, but there was time to read a lot, catch some fish and enjoy amazingly clear skies at night. The morning we made landfall in Antigua, we couldn’t see the island at all. Suddenly, out of the rainclouds, land came into view. We were able to fly the spinnaker all the way down the west coast to English Harbor. We passed the Pillars of Hercules and tucked into the inner harbor shortly after noon. It’s so different once you’re in there because that harbor is so well protected.” 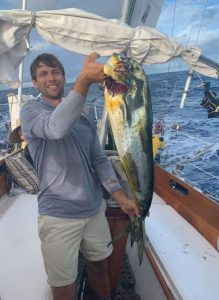 Tripp Brower had some success fishing during their trip from Bermuda to Antigua. (Photo courtesy of ApparentWinds.com)

Despite the many elements of adventure inherent in this undertaking, both Brower and Bjur are keen to convey that this voyage is about much more. While en route, they’re conducting educational outreach by communicating with students at five different schools in Charleston through an affiliation with the Lowcountry Maritime School, an organization Brower founded under the name Lowcountry Maritime Society. They’re offering updates on their experiences as well as scientific observations. They’re also connecting with researchers and residents in the various ports they visit with the objective of learning how these island and coastal communities around the globe are responding to climate change.

“Much of this journey,” explains Bjur, a former naturalist with the South Carolina Department of Natural Resources, “will be captured on film, and that footage will ultimately become a documentary titled Sea Change.

“In these early weeks, we’ve been recording sea temperatures and wave heights relative to GPS coordinates,” he says. “And we’ve been doing some storytelling about the work of people that we’re connecting with along the way. For instance, we spent time at the Bermuda Institute of Ocean Sciences. The professionals there have been conducting research on sea temperatures and ocean acidity, etc., since the 1950s. The data they’ve amassed is used worldwide. And we’ve been talking to people in places like Dominica about the impact of sea level rise and the recent hurricane damage they’ve experienced. Soon, we’ll be visiting with scientists in Grenada who are working in the field of coral gardening.”