CofC Day: A Moment for Celebration and Reflection

The College of Charleston on Thursday, Jan. 30, 2020, celebrated a moment two-and-a-half centuries in the making – officially kicking off a yearlong celebration of the 250th anniversary of the institution’s founding. It’s a distinction that only a dozen other universities in the United States can claim.

“We are indeed in rare company, and we want to make the most of this anniversary by honoring our past, by celebrating our present and by generating excitement and optimism for our future,” said College of Charleston President Andrew T. Hsu, during a ceremony in the College’s iconic Cistern Yard marking the institution’s milestone anniversary. 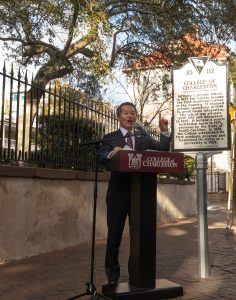 President Hsu speaks at the unveiling of a new South Carolina Historical Marker along George Street.        (Photos by Heather Moran and Mike Ledford)

The date of Thursday’s celebration is tied to Jan. 30, 1770, when South Carolina Lieutenant Governor William Bull recommended to the colony’s General Assembly the establishment of a college in Charleston. As part of the day’s festivities, the College hosted a series of campus activities for students, faculty and staff, culminating in the unveiling of a new South Carolina Historical Marker ahead of the ceremony celebrating the 250th anniversary in Cistern Yard.

The initiative to erect a historical marker was led by the 250th Anniversary Historical Documentation Committee, including English Professor Julia Eichelberger; scholar-in-residence Harlan Green; Executive Director of Communications Ron Menchaca; and student researchers Keyasia Pride and Grayson Harris. The two-sided marker, which is located on George Street between Porter’s Lodge and St. Philip Street, highlights key milestones in the College’s history, from its founding in 1770 to its becoming the first municipal college in the country to the establishment of its first graduate program in 1972. The marker also calls attention to the historical facts that the College resisted the enrollment of women until 1918 and sought to avoid racial integration by going private in 1949. The College admitted its first African American students in 1967.

The result, said Hsu, is “a marker that accurately tells a fuller story of the College of Charleston,” both the good and the bad.

“I’m proud of this marker because it does not hide the ugliness of our past,” Hsu said. “On the contrary, it directly confronts it while still celebrating some of our key milestones.”

Hsu added, “Now anyone walking our campus – visitor or a member of our community – can stop, learn about our institution and reflect on just how far our wonderful university has come since 1770.”

Also happening on Thursday, the College launched a 24-hour giving campaign dubbed CofC Day, aimed at generating excitement and support for the institution’s future. By midnight on Friday, the campaign had raised $5,050,863, crushing the $1 million goal. 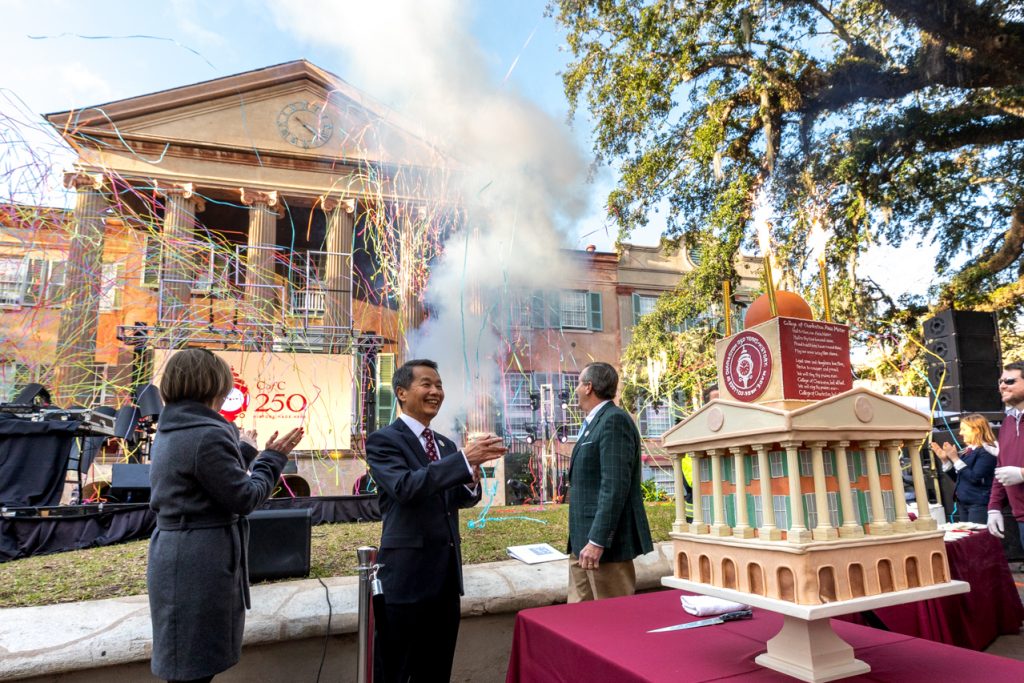 On Jan. 30, 2020 the College of Charleston celebrated the 250th anniversary of the institution’s founding with a ceremony in Cistern Yard.

During a private luncheon Thursday afternoon, Hsu hosted the College’s Founders’ Medal awards ceremony, which honored former South Carolina state Rep. Lucille Simmons Whipper, the international arts festival Spoleto Festival USA, and CofC alumnus the-late Julius Waties Waring (Class of 1900). Established on the 200th anniversary of the chartering of the College, the Founders’ Medal is the most prestigious award given by the College to individuals and organizations with demonstrated distinction in the fields of education, science, government, business and the arts, or through exemplary accomplishments as leaders and outstanding citizens of the community.

Nigel Redden, general director of Spoleto, accepted the award on behalf of the organization, noting that without the support of the College and its then-president Ted Stern at the inception of the festival in the late 1970s there would be no Spoleto Festival. U.S. District Judge Richard M. Gergel accepted the Founders’ Medal on behalf of Waring. A champion of Waring’s efforts to advance civil rights for African Americans, Gergel has written a book on Waring and was instrumental in securing a monument honoring Waring outside Charleston’s federal courthouse, which was also renamed in Waring’s honor in 2015.

The 92-year-old Whipper received a standing ovation during her acceptance of the medal, after urging the next generation to get involved if they see something that needs to be done. Whipper, who was the first African-American woman to represent Charleston County at the South Carolina Statehouse and was instrumental in establishing the College’s Avery Research Center for African American History and Culture, said acting when she sees a problem is at the heart of her activism.

“To me, they are amazing examples of what our College of Charleston seal means with the phrase, Wisdom Itself Is Liberty,” Hsu said of the Founders’ Medal recipients. 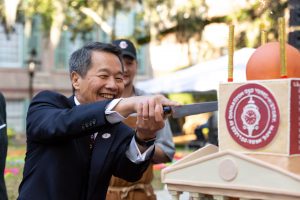 President Hsu cuts the 250th Anniversary cake during the celebration in Cistern Yard.

Hsu and College of Charleston Board of Trustees Chair David Hay ’81 during the ceremony in Cistern Yard stressed that the anniversary is a time to reflect on the institution’s complex, sometimes dark past, while looking ahead to a new chapter.

“We cannot change all of the bad in our past, but we, individually and collectively, can change our present and our future by always demanding the best of ourselves,” said Hsu.

Hay noted, “Fortunately for us, many people worked together – for two and half centuries, to be exact – to build this college into the great university it is today. And fortunately, for us, there are many people still working together and dedicated to making this university even better.”

The way forward, said Hsu, is to honor the best of the College’s traditions while looking toward transformation.

Amid the reflective nature of the afternoon’s ceremony, students, faculty and staff mingled in Cistern Yard as the College’s cheerleaders and pep band, Chucktown Sound, performed. Confetti and cake, honoring the College’s anniversary, capped off the event ahead of a block party in the evening.

First-year students Emily Turner and Jordan Sweeney, who are campus tour guides, said they were thrilled to be part of such an important moment at CofC.

“We just got here, but we’re already such a big part of campus,” said Turner, who is double-majoring in international studies and hospitality and tourism management. “We fell in the love with the campus, so it’s really good that we get to celebrate it with everybody else.”

Sweeney, who is majoring in hospitality and tourism management added, “It’s exciting to be a freshman and be a part of such big history within the College.”

Eddie Artis Jr., a senior majoring in public health, said that he is glad to see Hsu acknowledging a fuller version of the College’s history, including the institution’s struggles with racism and reluctance in the 1960s to integrate, but that there’s a lot more work to be done to improve diversity and inclusion on campus.