How do you respond to a partially eaten apple that’s nearly 10 feet tall? How do you react when confronted with a refrigerator full of information about the issue of food security? These are some of the questions prompted by the work of three students whose artwork is on display across campus as featured installations in the Student Art Expression of the Year program.

Each spring, the College’s Center for Sustainable Development puts out a call for proposals for artwork that addresses a chosen theme for the following academic year. This year’s theme is food security, and the three student artists whose proposals were selected (and who received funding from the center to pursue these projects) are seniors Asa Perryman and Adrian Lopez Rivera and junior Sage Jadrnicek.

The College Today visited the three installations (which will be on display until mid-May) to learn from each artist about their respective inspiration, and the aspirations they harbor for the impact these pieces might have. 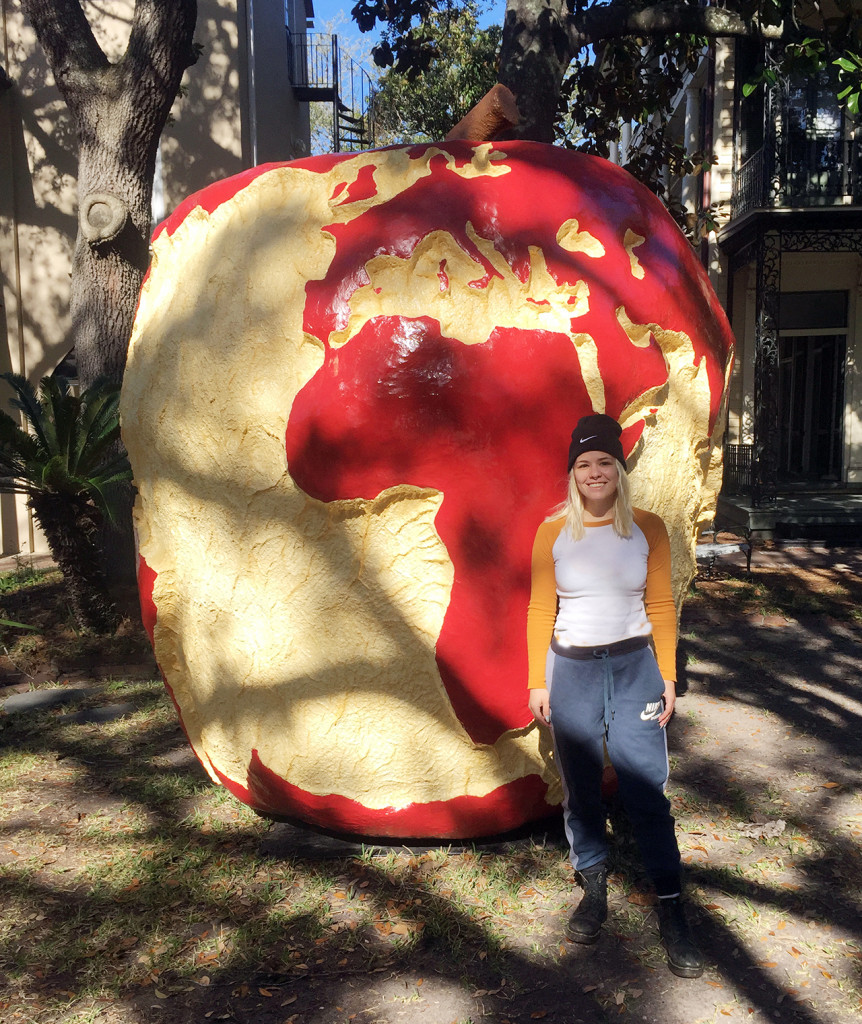 Asa Perryman with her apple sculpture in front of the Center for Sustainable Development. (Photo provided)

Asa and the Big Apple

“I’ve been curious about food security for some time now,” says studio art major Asa Perryman. “It’s an issue that resonates with me, and honestly, once you become informed about it – say you discover that 13 percent of people in South Carolina are food insecure or that 30 percent of students at the College are – it’s powerful. I’m so glad that the College chose this topic as the theme for the current academic year.”

Perryman says that the concept of creating this apple, which is installed outside the Center for Sustainable Development on Green Way, is a project that took her five months to complete. The piece, which weighs nearly 1,000 pounds and is titled “Tuition to Fruition,” grew out of her preference for artwork that’s somewhat surreal and humorous at the same time.

“Much of the work that I create is political in nature,” she explains, “but I like to make statements in a fun way so that my work isn’t off-putting, but invites conversation and provokes thought.”

Perryman admits that the shape of recognizable continents on the partially eaten apple emphasizes the global nature of this issue, but she hopes that viewers won’t limit themselves to that understanding of the piece because food security is a complex issue.

“It’s not a problem that only afflicts so-called third-world nations. And it doesn’t have to connote starvation,” she says. “It can also mean a lack of access to healthy food. There are a lot of ways to understand food security, and that’s in keeping with my piece because I think it’s important for art to be interpretive. What the viewer takes away is as important as what the artist intended.” 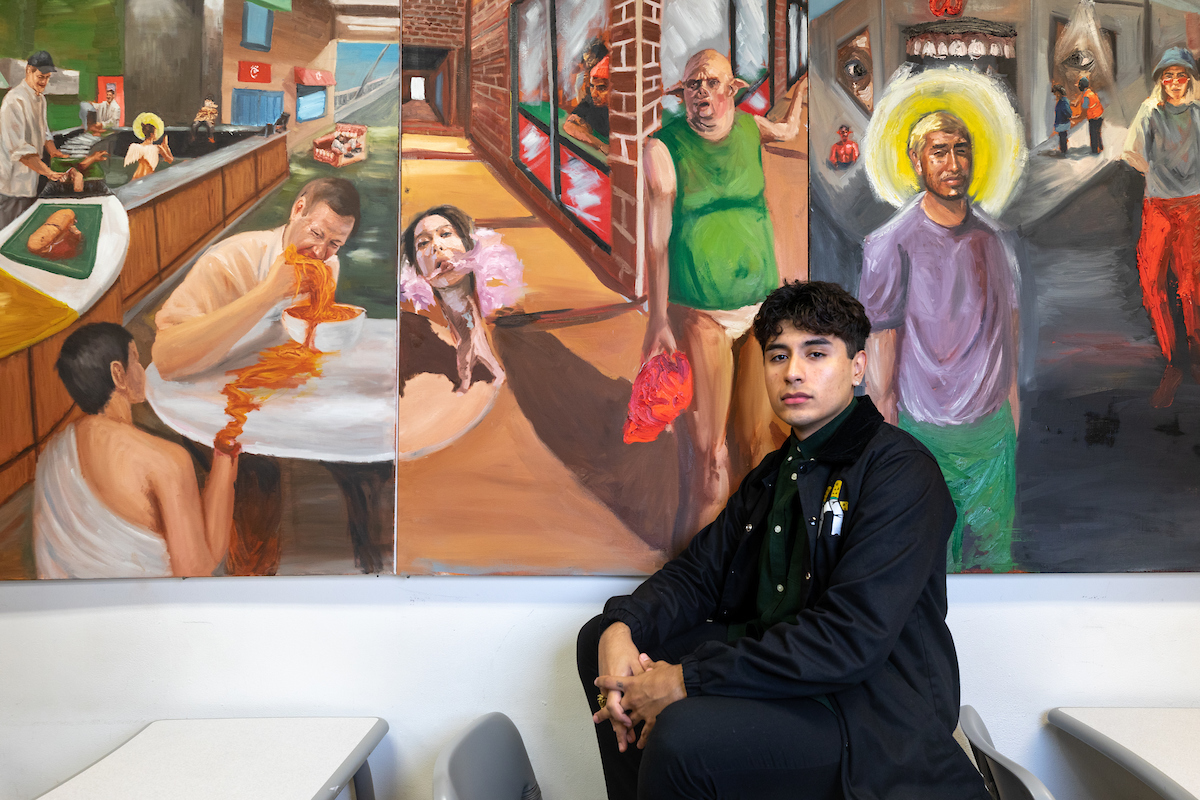 Adrian Lopez Rivera sits in front of his triptych about food security. (Photo by Heather Moran)

Take a casual glance at Adrian Lopez Rivera’s trio of paintings and you’re apt to do a double take. Is that man in the left-hand panel actually eating another man’s arm? In the right-hand panel, is that building about to devour a person? And in the middle, is that a man or a pig?

Lopez Rivera, a studio art major in the Honors College, hopes that some viewers will actually chuckle when they see this piece, which is currently on display in the Albert Simons Center for the Arts.

“I was going for some humor here, sort of tongue in cheek humor,” he says. “Most of my other work is on a much smaller scale, but I wanted to challenge myself with this. I wanted to be entirely outside my comfort zone on this project.”

This is the first time that Lopez Rivera has created a triptych, and this is the largest piece he’s ever painted. He says it was a demanding process, yet he opted to stick with it because the triptych format allowed him to solve several problems.

“I wanted to show different aspects of food security,” he explains. “As a student, you essentially have three different sources for food: the fast food on King Street, the dining halls and the convenience stores around campus. That can be an issue because some students don’t have the resources to buy food through these outlets. Often, the options they have aren’t so healthy.” 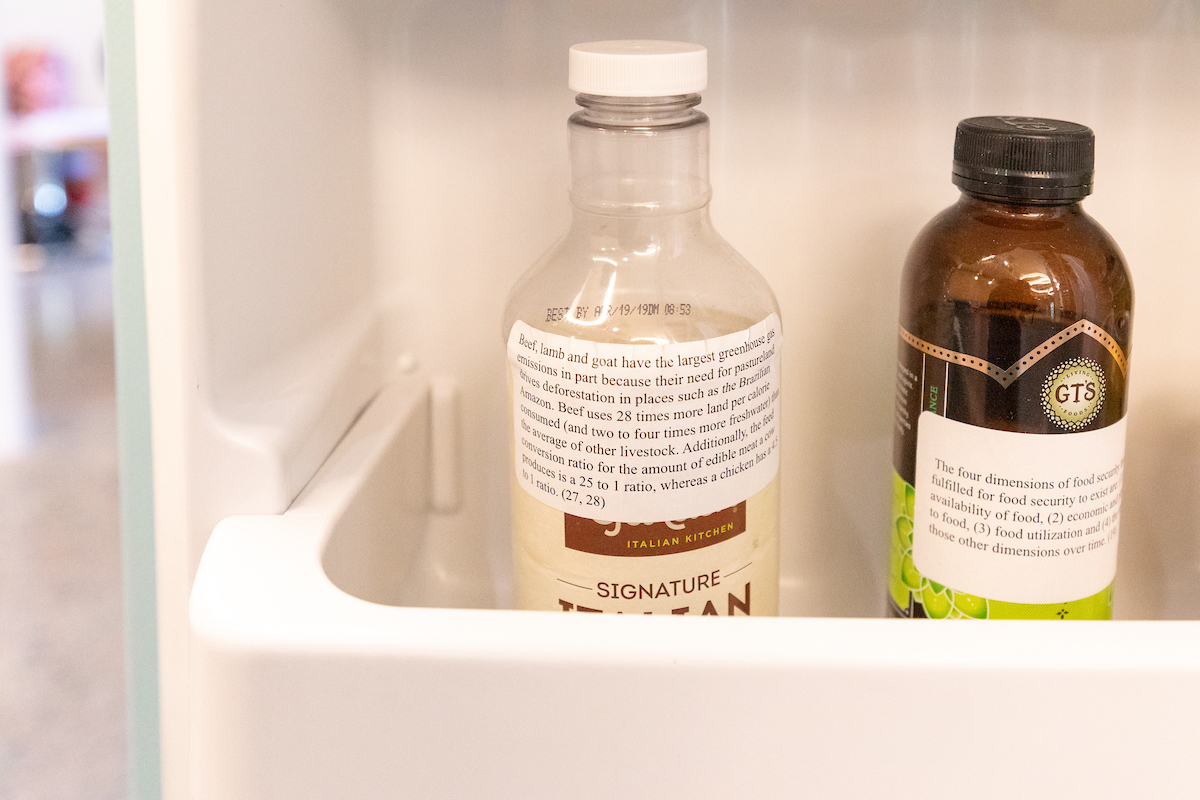 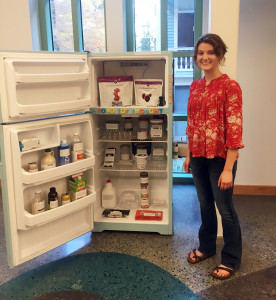 “I wanted to create something that would grab people’s attention,” says computing in the arts and studio art double major Sage Jadrnicek. “A blue fridge isn’t something that you often see in a building’s lobby. (Her installation is on display in the lobby of the Rita Liddy Hollings Science Center.) I also wanted to work sustainably by using materials that wouldn’t otherwise be used for something else, so I found this refrigerator at a junkyard and salvaged it.”

Jadrnicek says the research she did on sustainability and systems in preparation for this piece was a true learning experience. She shares this knowledge through the facts written on the reused food containers inside the installation. But her principal purpose beyond educating those who view the piece was to invite their interaction.

“I love interactive artwork,” she explains. “And research has shown that making text difficult to read encourages recall, so I wrote the facts within the freezer with ultraviolet pens. This requires interaction because viewers have to read with the UV flashlight provided, and that process slows them down to absorb the information. Also, the left side of the refrigerator offers advice for improving food security and receiving help if you’re food-insecure, as well as space for viewers to add their own suggestions. People can add sustainable events to the calendar and take the free magnets I designed to help spread food security awareness. In addition, I’ll continue responding to comments and questions placed in the message box, too. I hope this piece will engage more people in this issue and inspire them to take sustainable steps toward a food-secure future.”

The theme for the 2020-21 academic year will be climate change. A call for proposals for the Student Art Expression of the Year regarding that theme will be issued later this spring.