CofCServes Empowers Cougars to Give Back

Being of service is about giving back to make a difference not because you’ll receive praise, but because you take joy in knowing your efforts will make someone else’s life better.

“Service has been a part of the College since 1770 when it started, so we wanted to make sure during this momentous anniversary that there was a way to recognize that,” says Kristen McMullen, director of the School of Business’ Student Success Center and co-chair of the subcommittee leading the CofCServes initiative.

CofCServes encourages students, alumni, faculty, staff, parents and families to dedicate time to participating in a CofCServes on campus service project as well as volunteering in their communities. During the College’s 250th anniversary year, which runs through January 2021, all members of the CofC community are encouraged to complete 250 minutes (a little over four hours) of service. 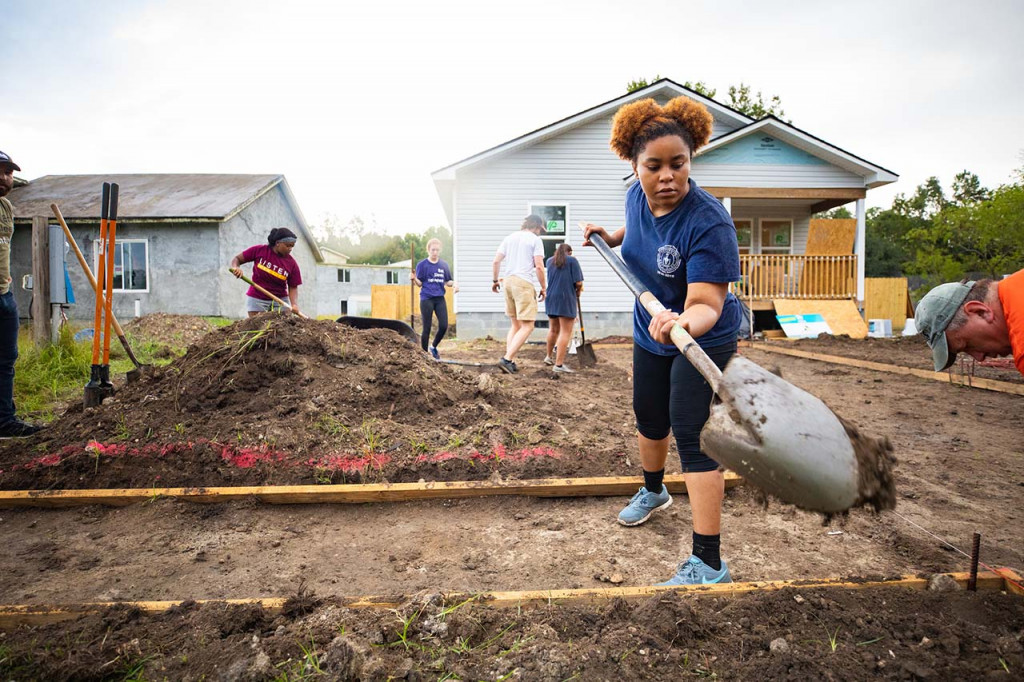 A student volunteers for a project through Habitat for Humanity. (Photo by Mike Ledford)

“The goal of the CofCServes initiative is to highlight the community service that our College of Charleston students, faculty, staff, alumni, parents and families are already engaged in and inspire others to get out in their communities and make an impact,” says Cande Cook, project director for the College’s 250th anniversary celebration. “We look forward to our College of Charleston family making a difference in our community and beyond.”

With March designated as the College of Charleston month of service, CofCServes will kick off several on-campus service projects in the coming weeks. Beginning on Monday, March 9, 2020, the College will partner with Operation Gratitude to hold a letter-writing campaign for active duty military members, veterans, recruit graduates, first responders and wounded servicemen and -women and their caregivers. A station will be set up on Cougar Mall on March 9 from 10 a.m. to 2 p.m. where the CofC community can write letters of support. The station will return to Cougar Mall during the same time on March 26. Throughout March, letters can be dropped off in room 110 of Randolph Hall, the Beatty Center first floor lobby and the 2nd floor of the Lightsey Center. The goal is to collect 250 letters.

On March 11, CofCServes, in partnership with the business fraternity Phi Chi Theta, will launch a food drive for the Cougar Pantry, the College’s food pantry that serves students. Nonperishable, unexpired goods can be dropped off at four location around campus including room 110 of Randolph Hall, the Beatty Center lobby, the Lightsey Center lobby and at the Cougar Pantry, located on the second floor of the Stern Student Center. 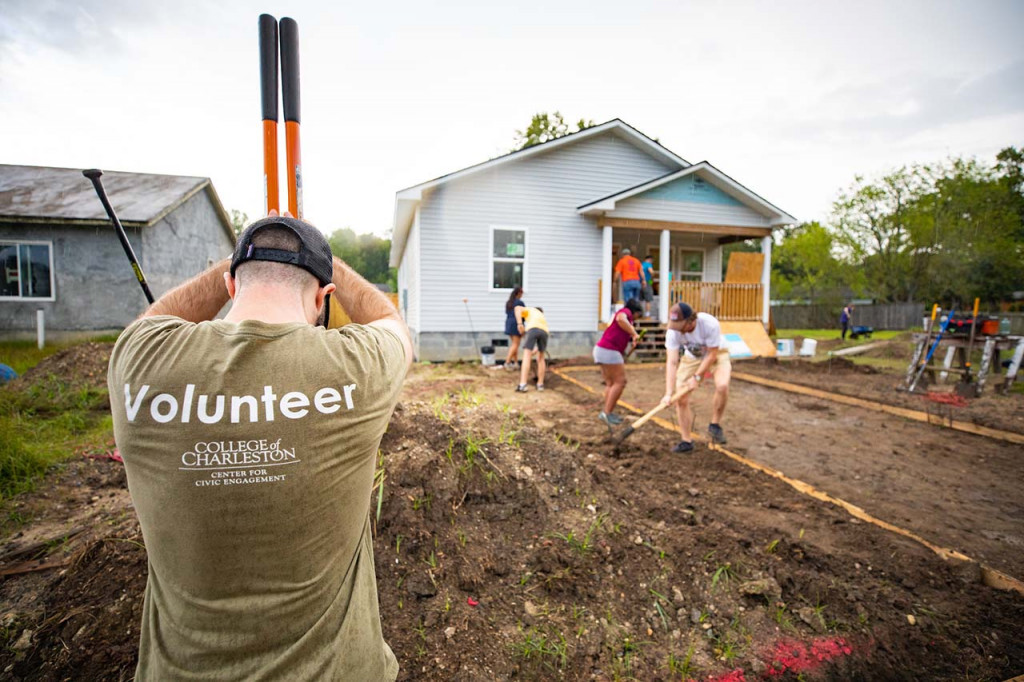 A student works on a garden project with Habitat for Humanity. (Photo by Mike Ledford)

The CofC community can also help pack hygiene kits for people in need during one-hour packing shifts in room 201 of the Stern Center on March 12 from 12 to 2 p.m. and March 18 and March 26 from 11 a.m. to 1 p.m. All the supplies and materials for the kits will be provided.

In addition to on-campus projects, McMullen and CofCServes co-chair Erin Blevins, administrative coordinator for the Office for the Academic Experience, want to create off-campus service projects so that CofC faculty, staff, families and students who live in the greater Charleston area, such as Summerville, Mount Pleasant or North Charleston, can connect in their communities. The College family is invited to be part of the first regional CofCServes project taking place on Saturday, March 28, 2020, from 9 a.m. to 12 p.m. to rebuild the Katie’s Krops garden in Summerville. Volunteers will be cleaning up the garden as well as building and filling new planter beds. To sign up for this project, email CofCServes@cofc.edu.

Blevins says more ideas for service projects in the community are welcome.

“We want to give people who live in different areas a chance to serve their communities as part of the Cougar family,” says Blevins.

Members of the CofC community are encouraged to submit a form showing their completed projects along with a photo of themselves volunteering. The images will be used to create a photo mosaic that CofC President Andrew T. Hsu will hang in Randolph Hall.

The goal is to show the world that Cougars are dedicated to making a positive impact.

“Giving back is part of who we are as a College, and everyone can be part of it no matter how large or small your contribution to the community is,” says McMullen. “Together we can all really make a difference.”

Visit the CofCServes website to learn more about the initiative and stay up to date on community service opportunities. To find out about other volunteer opportunities, visit the College’s Center for Civic Engagement website.