College of Charleston Esports Club is Powering Up

When people think about gaming, they might imagine it as a solitary activity. But, as members of the College of Charleston’s Esports Club are quick to point out, gaming can be a very social activity that emphasizes teamwork and establishes close bonds between players.

Founded in 2018 by senior Afif Bizri, the club challenges stereotypes that gamers are antisocial.

“We have several games that are teamwork based,” says Bizri, a business administration major. “One game, Rocket League, is played in teams. It’s important to have chemistry as a team; you have to have your teammates’ backs and know that they have yours.”

Although the Esports Club is still relatively new, their Rocket League, which consists of three-person teams, is already among the top 20 teams in the country. This accomplishment is the result of a tremendous amount of hard work and practice.

“I’ve worked in esports for the past few years, and saw other schools have big, successful clubs and wanted to have my own,” says Ezekiel Carsella, who co-founded the club with Bizri and is the group’s current president. “I believe [esports] is a ton of fun, and I’ve met so many great people along the way.”

And one added plus these days is that esports is a virtual activity, which lends itself to being the perfect social outlet in this time of social distancing.

“The esports scene as a whole has seen growth because its the only sporting style event that doesn’t need to be held in person to be enjoyable to watch (Formula 1 Esports for example),” says Carsella, noting that Esports Club is planning to host some online programs for club members in April. “Esports Club is one of the few clubs which can still meet and hangout pretty much uninterrupted.” 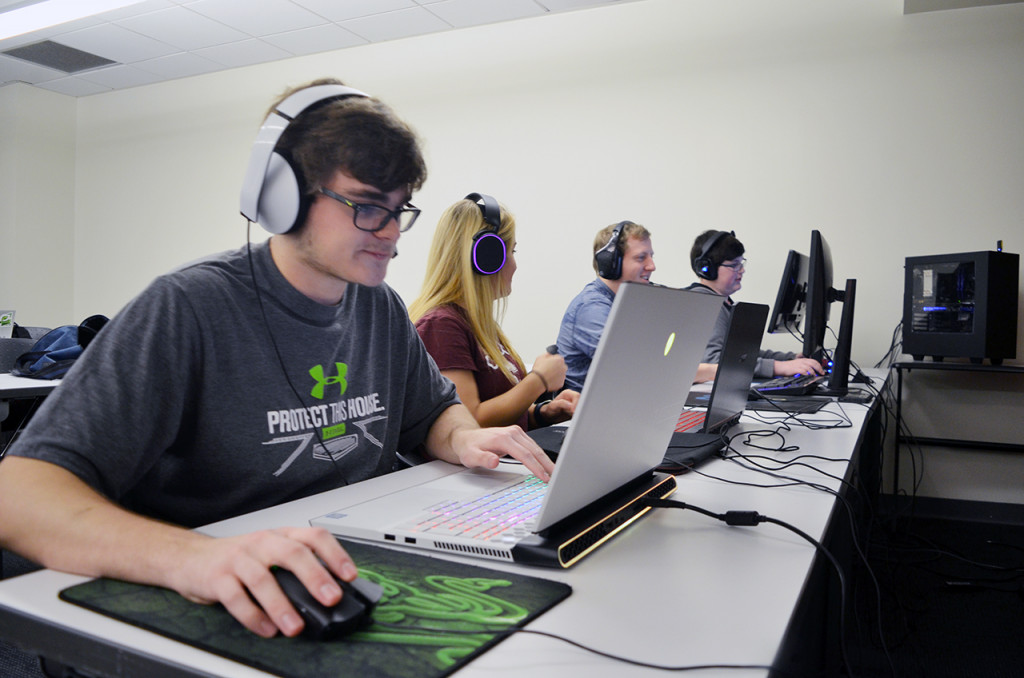 Students attend a regular meeting of the Esports Club in the fall of 2019.

Jerrel Bennet, a senior computer science major, agrees that the club is an important social outlet for students who like gaming.

“In college, it can be very difficult to make friends or find people interested in the same things you are, so the Esports Club helped me tremendously,” says Bennet. “The Esports Club helps me feel like I’m a part of the community because I can find others with similar interests.”

So what does “practice” look like for a gaming team?

At their weekly meetings, teammates watch footage from previous matches and discuss plans for upcoming matches. Just like in traditional sports, esports teams come into every competition with a specific strategy.

“It’s all about finding patterns. If you can find a pattern in an opponent’s gameplay and find a way to exploit it, then you’re all set,” says Bizri.

Reviewing past games also helps members identify patterns in their own play.

“It’s crucial not to become predicable yourself,” says Bizri. “If the opponent knows your next move before you do, you’re all but done for.”

Another common tactic gamers use is called tilting, which is essentially taunting an opponent with the goal of frustrating them and throwing them off their game.

“It’s all about getting into your opponent’s head,” says Bizri.

The Esports Club has a steady flow of about 60 members and welcomes anyone to join or observe a meeting. And as an esports journalist for digital publications such as RealSport and Gfinity, Carsella, a marketing major who also works as a consultant to help esports organizations find players, has the skills and ambition to help CofC’s Esports Club go viral.

“I would like to host a really successful event later this semester, have one of our teams win a tournament and eventually have the College recognize it as a varsity sport,” says Carsella.

Featured image: Students in the CofC Esports Club at an event hosted in the Stern Student Center in the spring of 2019.

Jack Bartlett is a freshman in the Honors College at the College Charleston. A native of Bristol, Tennessee, he is active with the Student Government Association, Charleston Miracle and the Entrepreneurship Living Learning Community.

It's #NationalTransferStudentWeek! Did you know 25

Today is #WorldMentalHealthDay! College is full of