Imagine a play spoken in German with scenes that vary in style and format from animation to a talk show to commercial parodies to a radio play – all performed online. That isn’t what students in Morgan Koerner’s German theater course planned on when they enrolled in the class, but when the College of Charleston shifted to e-learning for the remainder of the 2020 spring semester, they decided to think outside the box and reinvent what was supposed to be a live play. 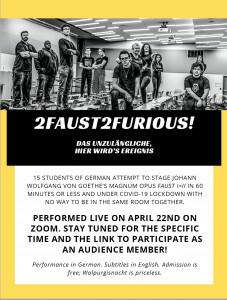 Cleverly titled, “2 Faust 2 Furious!” the students’ play is an interpretation of Faust I and II by German playwright Johann Wolfgang von Goethe, which was completed in 1831. Koerner has been teaching the German theater class since he began at the College in 2007, and it has always culminated in a 60-minute, cabaret-style performance of different scenes from a German play. Koerner says the live performance helps students improve their German comprehension, enables them to overcome their inhibitions and become more confident speakers.

The class is structured so each student has a role in the creation of the play and contributes to scenes either on their own or collectively. The various scenes highlight the students’ interpretations of the work, which results in a dynamic, engaging performance.

In years past, audience members have jumped to their feet at the end with a standing ovation. The rise of COVID-19 forced the students to find a way to replicate that energy online. And it was a tough transition for the students to make. 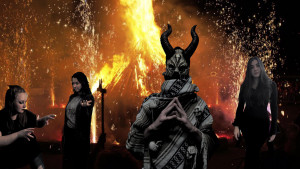 Students depict the witches attending Walpurgisnacht in a promotional image.

Senior German major Cara Bevensee says the “whole dynamic shifted. Everyone felt defeated because it’s such a physical, in-person class, and, after working all semester, we had to consider whether to restructure the entire play.”

After much debate, and in a display of great resilience, the class decided to incorporate their frustrations into the play. The opening scene reenacts the debate about whether to scrap the play completely or continue with the show.

The play in question, Goethe’s magnum opus Faust, retells the legend of a scientist who made a pact with the devil in order to gain access to magic. Goethe’s version, however, changes the pact into an existential bet and reframes the original Christian framework of the tale in the context of post-Enlightenment Europe. The play itself is an amalgam of different genres, and the students’ scenes and interpretations mirror and update the play’s aesthetic eclecticism.

The results of the students’ efforts, which will air on YouTube live at 7 p.m. on Wednesday, April 22, 2020, is one that has pushed many to explore new skills and stretch their understanding of the German language. 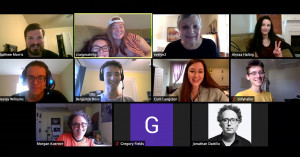 Students meet with professor Morgan Koerner on Zoom to rehearse for their performance of ‘2 Faust 2 Furious!’

“It’s still a little strange going through all the lines without being around people, but it has also allowed me to go back and use video-editing skills I haven’t used in a long time, and even learn some new ones!” says Quinn Wesley Williams, a senior majoring in physics. “Everyone in the class is very creative, and it’s great to see the energy when everyone’s together in our groups. The switch to virtual has also given us more time to practice the pronunciation and our voice acting.”

Williams volunteered his editing, sound and computer skills to help the team and created animations using pictures of the members of the class for some of the scenes.

“It’ll kind of fit a Monty Python/South Park-esque style with the entire top half of a person’s head moving when they talk,” he says. “I’ll also be making sock puppets for another scene, which should be amusing.”

Catch “2 Faust 2 Furious!” live on YouTube at 7 p.m. on Wednesday. At the end of the performance, viewers will be invited to join a talkback session on Zoom with the cast.