By Editor|2020-05-06T13:53:02-04:00April 27, 2020|All News, Alumni, Side Feature|Comments Off on CofC Remembers Beloved Alumnus Tony Meyer
Be magnanimous: That’s what Tony Meyer ’49 always told each member of the College of Charleston’s Student Alumni Associates. Words to live by – and indeed, Meyer, who dedicated more than seven decades of his life to the College, certainly did. Anthony J. Meyer passed away on April 25, 2020, at the age of 91. A lifelong Charlestonian, Meyer grew up in the Ansonborough neighborhood, just a few blocks from campus. He was the first in his family to attend college, earning his degree in English from CofC in 1949. After serving in the United States Marine Corps, Meyer returned to the College and built a career and lasting legacy of compassion, honor and dedication. Meyer is survived by his three sons, Anthony J. Meyer Jr. ’88, M. Kevin Meyer ’89 (Dr. Karen Mitro Meyer ’91), and Joseph B. Myer ’92 (Eleanor); and his grandchildren, Patrick Meyer (currently a freshman at the College), Ryan Meyer, Emory Meyer, Helen Meyer and JB Meyer. 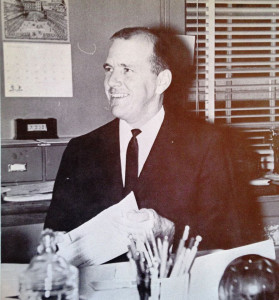 Meyer’s fingerprints can be found on virtually every corner of his beloved alma mater. During his years as a student in the 1940s, Meyer was a member of the CofC men’s basketball team. When Meyer came back to CofC, he served the institution in a variety of roles including faculty member, coach, chair of the Department of Health and Physical Education, director of athletics, director of intramural athletics, director of college relations, director of student relations, director of student activities, director of counseling, dean of men, vice president of alumni relations, and executive secretary of the Alumni Association. In 1997, the Alumni Association named him executive secretary emeritus. He has received nearly every significant honor the College has, including induction into the Athletics Hall of Fame, an honorary doctorate of humane letters from the College, an honorary doctorate from the University of Charleston and the Alumni Award of Honor. RELATED: Read President Hsu’s Letter to the Editor in The Post and Courier celebrating Tony Meyer’s life. Even after his retirement in 1994, Meyer continued to stay involved at the College and could regularly be found on campus, at alumni events and cheering on the Cougars at TD Arena. “To his core, Tony Meyer was a teacher,” says College of Charleston President Andrew T. Hsu. “He took great pleasure in trying to develop young minds, and he never tired of teaching, generation after generation, about Charleston and the role the College played in its development since the institution’s founding in 1770.” 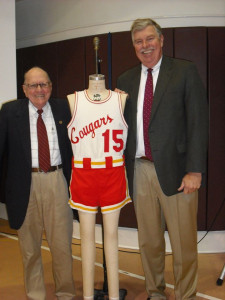 Meyer didn’t just love the College, says Karen Jones ’74, director of alumni communications and current executive secretary of the Alumni Association: He loved learning, he loved helping others and he loved planting the seeds of something new within students and watching them grow. “Tony Meyer epitomized all that makes the College of Charleston so special,” says Jones. “Through his generosity of spirit, sincere concern for others, passion for lifelong learning and lifelong friendships, and intense pride in his beloved alma mater, he left an indelible mark on generations of students and alumni who had the privilege of knowing him. It is hard to imagine the College of Charleston without Tony Meyer.  He was in many ways our institutional memory. Whether he was cheering the Cougars or giving an historical tour of the campus he knew so well, he was truly Mr. CofC. No one knew the College better or loved her more.” Among his many lasting contributions to the College was the creation of the Student Alumni Associates (SAA), which he established in 1984. One of the College’s premier leadership organizations for undergraduate students, SAA members aim to preserve and promote the College’s history and traditions by assisting with annual ceremonies, including convocation and commencement, as well as volunteering at campus and Alumni Association events throughout the year, including Admitted Student Weekend, orientation, alumni weekends, donor recognition events, career fairs and the College Ring Ceremony. In recognition of his many accomplishments on behalf of the College, the Alumni Association awards the Tony Meyer Scholarship to children of alumni each year – a way to continue the more than half a century of support Meyer gave to generations of students. “If you wanted to enhance the College of Charleston seal, all you would have to do is replace the center figurine with a portrait of Tony Meyer. In all of its 250 years, with all of its remarkable accomplishments, the record bears true that no one has ever so completely manifested with their life’s work the purest essence of the College of Charleston than he did,” says Director of Property Management Barney Holt ’74. “A true renaissance man, Tony dedicated his whole being to supporting the College, enriching the student experience and advocating for all she stands for to alumni and friends around the world. He spent his life in totality learning, leading, teaching and advocating for his beloved alma mater. And he did it with a level of wit, warmth, insight and class that is rapidly dissipating from today’s culture.” Memorial gifts may be made to the Tony Meyer Scholarship fund, which is awarded through the Alumni Association to children of alumni. Members of the CofC community who would like to share their personal memories or stories of Meyer may send them to alumni@cofc.edu for the Alumni Association to share with his family.