By Alicia Lutz|2020-10-15T08:59:07-04:00October 7, 2020|All News|Comments Off on Bernard Powers Provides Perspective, Hope to Class of 2020
Unprecedented. Uneasy. Uncertain. In times like these, it takes a special kind of person to lend perspective that gives hope and inspires change. Because Bernard Powers is that kind of person is only one of many reasons he was chosen to speak to the Class of 2020 at the College of Charleston commencement on Oct. 10, 2020. As a kid growing up on the south side of Chicago, Powers never dreamed he’d become a professor emeritus of history at the College of Charleston. When he sat in the pews of his A.M.E. church with his parents and his younger brother, he never imagined he’d write Black Charlestonians: A Social History 1822–1855, which would be the first of its kind and be awarded Choice magazine’s Outstanding Academic Book, or co-write We Are Charleston: Tragedy and Triumph at Mother Emanuel. When he looked around at his great-grandmother and his grandparents, aunts, uncles and cousins at the family barbecues, he never thought of going to a four-year college, much less getting his master’s or his Ph.D. in American history. “I didn’t know anybody who had a graduate degree,” says Powers, who’d planned to go to a community college before his high school counselor urged him to look at Gustavus Adolphus College – a four-year school in St. Peter, Minnesota. “I started there as a chemistry major – and even had been promised a job at a chemical company after graduation. The problem was, I felt this sense of isolation working in the chemistry lab, so I switched over to history. The irony is, of course, as a history researcher, you find yourself often alone in the archives. But at least you are conducting research that has to do with people’s lives, and what eventually happens is you almost adopt them into your own family, you get to know them so well. History just seemed much more alive, vibrant, connected to events that were impacting my daily life.” 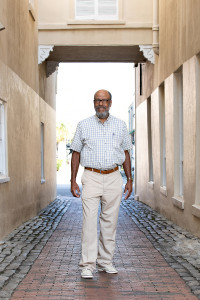 By the time he graduated cum laude, Powers had ditched not just Plan A (a two-year community college) and Plan B (the chemical company job), but Plan C, as well. “Even through my junior year, I intended to be a high school teacher – I was all set to take the education courses I needed my senior year and then student teach,” recalls Powers, adding that it was his history professor Fred Brown who suggested he go on to graduate school. “Fred said, ‘You’ve got the talent, and you’ve obviously got the interest to go further, so you should really think about that. If you don’t like it, you can always walk away and you won’t have any regrets. But if you don’t investigate it, you might always wonder if you could have done it.’ That was good advice.” Powers went on to get his master’s and Ph.D. from Northwestern University, studying American history and concentrating in both African American history and African history. From there, he worked as an administrator in the dean of education’s office and a social science lecturer at Malcom X College. In 1978, he joined the history faculty at Northeastern Illinois University and – over the next 14 years – served as department chair and director of their graduate program. His research – which culminated in 1994 with his book Black Charlestonians ­– inevitably led him to Charleston. In 1992, he began teaching history at the College of Charleston, where he has served as the chair of the history department and the director of the master of arts in history program. “I came to the College of Charleston at a time that really allowed me to stretch and grow,” says Powers, noting that the African American studies minor was established shortly after his arrival, and that the Avery Research Center for African American History and Culture was just starting to move forward, as well. “So, there were some positive things happening in the area of African American studies that I could be a part of and I could help build out on the ground level.” Powers – who has served as president of the Avery Research Center’s advisory board, received the College’s Distinguished Advising Award in 2011 and was named professor emeritus of history in 2018 – has not only seen African American studies become a major, he’s been a part of the establishing the College’s African Studies Program, the Program in the Carolina Lowcountry and the Atlantic World and, most recently, the Center for the Study of Slavery in Charleston (CSSC). RELATED: Read about the College’s Center for the Study of Slavery in Charleston. “You can see how we’re marching toward a more expansive and more inclusive understanding of the experience of African people” says Powers, who serves as the founding director of the CSSC. “Now, we’re not yet where we need to be. But that is the context out of which the Center for the Study of Slavery evolved. And it is the latest manifestation of this move toward a greater embrace of the lives of African people here in South Carolina and at the College. It shows that the College’s embrace of these issues has changed dramatically over the years.” It also shows how much work Powers has put in over the years. “I’ve always tried to bring the College to new places and to be its representative and let audiences know what kinds of positive things are happening here,” says Powers, who is also currently serving as the interim CEO of the International African American Museum in downtown Charleston. “There have been a lot of ways in which I was able to connect the College with other institutions in the metropolitan area. All of that was positive and allowed me to kind of build out my footprint in the area.” Powers’ footprint soon extended well beyond the Charleston area, of course. He serves as a consultant to historic preservation organizations, including the National Trust for Historic Preservation and the Drayton Hall Visitor Center and Interpretive Hall. He has appeared in documentary films, including the PBS production, African Americans: Many Rivers to Cross and Emanuel: The Untold Story of the Victims and Survivors of the Charleston Church Shooting. In addition to Black Charlestonians and We Are Charleston, Powers wrote a book chapter in 2015 titled “Churches as Places of History: The Case of Nineteenth Century Charleston, South Carolina” in Interpreting African American History and Culture at Museums and Historic Sites and was an associate editor of the Encyclopedia of South Carolina (2006). He is also the editor of  101 African Americans Who Shaped South Carolina, which will be published later this month. RELATED: Learn about the legacy of hope that Powers finds five years after the tragedy at Mother Emanuel. 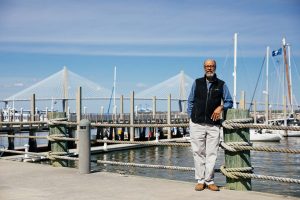 In 2019, the Association for the Study of African American Life and History recognized his commitment to “research, writing and activism in the field of African American life and history” with the Carter Godwin Woodson Scholars Medallion. Powers is a member of Morris Brown A.M.E. Church, where he serves as a class leader and member of the Steward Board. He is married to Lorraine O. Powers, a retired school administrator from the Dorchester County District Two School System. “My wife has been a great source of motivation – marrying her has been one of the best things I’ve ever done,” he says. Also at the top of the list: getting an education. “Through education, many different doors have opened up for me. That’s what a good education does – opens you up to a whole range of possibilities,” says Powers. “It also makes you realize over and over again how little you actually know. And so I’m excited to learn new things – and can never find enough time. But I’m guided and motivated by an intellectual curiosity, and a thirst to learn new things. I hope I’ll never stop learning.” And that’s what he hopes for the Class of 2020, too. “We’re all learning some important lessons right now – and one of those is how much the past matters,” he says. “I hope that young people see the connection between the past and the present. Whether it is the roiling dissatisfaction over Confederate monuments and buildings named after our racist leaders or the killing of unarmed Black people by the police authorities: Every one of these issues has some roots in the past. Yes, they’re contemporary problems, but they have long roots. So we need to understand it. Not be bound by it, but we do need to understand how it has brought us to where we are today. “The past conditions us in so many ways, what we are today and what we can become,” Powers continues. “I hope that these students can see that, and that that perspective gives them hope – and that they will use that hope to guide us to better future.”