CofC Staffer to Appear on Oprah Winfrey’s ‘Zoom With Oprah’

Kenyatta Grimmage, associate director for access initiatives and pre-college programs in the College of Charleston Office of Admissions, will be a guest on an election-related program with Oprah Winfrey this Thursday, Oct. 29, 2020, at 8 p.m. 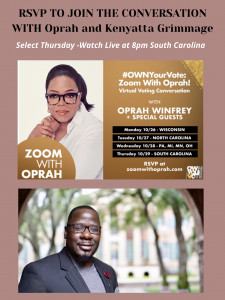 Grimmage will be featured in the final episode of Winfrey’s four-day series #OWNYour Vote: Zoom With Oprah!, featuring voters from across the country. Thursday’s program will feature voters in South Carolina, including Grimmage, who will appear in Howard’s Barber & Styling Shop located in Goose Creek, where he works as a barber.

“I’m excited,” says Grimmage. “If I have the opportunity to convince someone, one other person who looks like me to go to the polls – if that’s the only thing that comes out of this – then this will be worth the while.”

RSVP at zoomwithoprah.com to watch Grimmage’s conversation with Oprah Winfrey. Producers for Winfrey reached out to Grimmage after he was quoted in an article by NBC News regarding South Carolina’s senate race.

Grimmage, who survived a cancer diagnosis as a teenager and went on to become the first person in his family to earn a college degree, has worked at CofC since 2009, focusing his efforts on recruiting and supporting minority students. In addition to his regular duties, he advises the Student Ambassador organization, Luminescent, a service organization for students of color, and Minorities in Medicine (MIM), a support organization for minority students who are interested in attending medical school. He also runs the Multicultural Overnight Visit Experience (M.O.V.E) program and the Otto B. German Minority Male Initiative program.

In January 2020, the Black History Intercollegiate Consortium (BHIC) – comprised of the College of Charleston, the Medical University of South Carolina (MUSC), The Citadel, Trident Technical College and Charleston Southern University – honored Grimmage with a MLK Humanitarian Award at its 30th annual Martin Luther King, Jr. Celebration. The awards are given to faculty or staff members who embody the ideals of equity, inclusivity and justice espoused by King.

A man of faith, Grimmage says he is honored to be a voice for his community.

“I just think God’s timing is always perfect timing,” he says. “I think it’s our responsibility to go out and vote.”