When you attend college, change comes with the territory. The typical undergraduate is exposed to a world of new experiences. Whether those involve academic subjects, different cultures, recreational pursuits or something else, they’re all apt to influence a person in profound ways. And often, that influence leads to change.

For some, change involves transferring to a new university or college – something that’s much more common than it might seem. Nearly 40 percent of all college students in the U.S. have transferred from one institution to another. At the College of Charleston, transfer students comprise more than 20 percent of the undergraduate population during any given year. That’s one out of five students on campus. 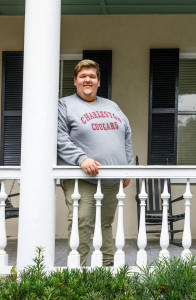 John Broome, a double-major in political science and history, transferred to CofC two years ago. (Photos by Heather Moran)

John Broome is one of those students. A political science and history double major from Easley, South Carolina, Broome transferred to the College from Spartanburg Methodist College. Nearly two years after arriving here, he says his life has changed in substantial ways.

“I knew that I wanted to be at a place where I was going to thrive academically,” Broome says. “But I also wanted to enjoy my time – on campus and off. The College turns out to be the perfect place for all that. I’m a history buff and Charleston is such an amazing historical center. I mean, the city recently celebrated its 350th anniversary, so there’s a lot to dig into here if you’re interested in history.”

After arriving on campus, Broome threw himself into activities. He became a resident assistant and a mentor in the Transfer Mentor Program (after benefitting as a mentee). He successfully ran for a seat on the Student Government Association, and later joined the Resident Assistant Advisory Board.

But not every aspect of his transition to the College went smoothy.

“CofC is my home away from home now,” he says, “but there were challenges when I first came here. I really didn’t know anyone, and I was coming from a very small, private college with only about 1,000 students. In addition, the academics here are a lot more fast-paced and in-depth, so it definitely required an adjustment on my part.”

Broome praises his resident assistant from that first year for understanding that he needed support.

“She knew I was a transfer student and consequently would be a little anxious about getting started,” he recalls. “So, she got in touch with me even before I arrived. She made my first few weeks on campus as good as they could have been by checking in with me regularly and staying in touch.”

Broome says he found support in a number of areas, too, including the Transfer Resource Center, the Academic Advising and Planning Center and from his professors.

“One person in particular,” he says, “was great. Professor Sandy Slater from the history department made it clear that she was just a text, call or email away. That was really reassuring and helpful for me.”

So, what advice does Broome offer other transfer students? “Just get involved,” he says. “Whether it’s in a club or an organization, it doesn’t matter. And you have to be open to change because it’s going to happen. But change can be good. Everything may not be perfect in the beginning, but that will change. Just throw yourself into being here; you’ll benefit from that.” 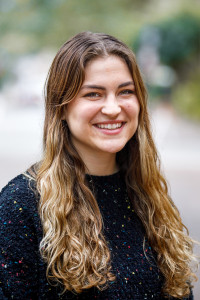 Emily Mullner, once a transfer student herself, now serves as a mentor in the College’s Transfer Mentor Program.

“Coming in from another university, particularly one so much smaller with such a focus on religion, was a challenge,” she remembers. “That’s primarily because the other students here all seemed to know each other. They’d all taken classes together and had already formed study groups. I wasn’t living in a residence hall, so I didn’t have that opportunity to bond. It was clear that I just had to put myself out there somehow.”

And that happened one day when she went to see one of her professors during office hours.

“Another student was already there” she says. “I overheard him talking and realized that he really knew his way around. So, when he got up to leave, I approached him. I said, ‘I know this is really random, but I’m new here and I don’t know anyone, and you sound like you’d be a good study partner.’ I asked him for his phone number, and pretty quickly I ended up in his study group.”

Mullner also joined the women’s club soccer team, where she formed a lot of friendships.

Like Broome, Mullner says that professors also made a big difference for her.

“On Day 1,” she says, “I told my chemistry professor that I was going to drop his class. I felt that I wouldn’t be able to keep up, but he convinced me to stick it out. So, I ended up in his office about two or three times each week that semester, just getting questions answered. That was Richard Lavrich. He was amazing. And to this day, he continues to support my academic journey by sending me MCAT prep materials and offering to write letters of recommendation. The fact that you can make such connections with your professors is phenomenal.”

Mullner also serves in the Transfer Mentor Program. She does this, she says, because she knows that the biggest issue for most students – but particularly for transfer students – is finding ways to make connections on campus.

“As a mentor for transfer students,” she says, “I tell them, ‘just do it – just throw yourself out there and take that leap. You’re already out of your comfort zone by coming to a new college anyway, so just embrace it. And if you do that, when the next obstacle comes along, at least you’ll have someone to help guide you through it.’”