Archaeology Comes to Life at the College of Charleston

It’s a beautiful spring day on campus as College of Charleston junior Robbie Ferrell carefully brushes away bits of dirt from some bricks. His work is revealing more and more of a mid-19th-century structure located just below the surface of the dirt at a site adjacent to Rivers Green. This anthropology major, who’s also pursuing a minor in archaeology, squats for closer inspection. As he does, Professor Jim Newhard leans over to make a suggestion.

“What you’re beginning to see are bricks that appear to form the roof of a small cistern,” Newhard says. “Let’s continue excavating carefully until we can see more.”

Newhard is the ideal person to offer this guidance. As a Classics professor and landscape archaeologist, he’s participated in and led archaeological digs around the U.S. as well as in Turkey, Albania and Greece. He’s also the director of the College’s Center for Historical Landscapes. 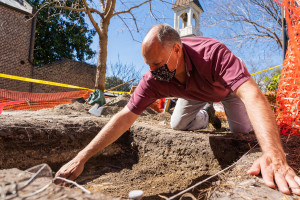 Geology and archaeology professor Scott Harris examines the layers at the dig site on the College of Charleston campus. (Photos by Mike Ledford)

Along with fellow professors Scott Harris (geology) and Grant Gilmore and James Ward (both historic preservation and community planning), Newhard has spent roughly a month supervising the archaeological excavations of this historic site. Some 36 undergraduate students have participated as well, volunteering to dig, scrape, brush, sift and catalog their findings. Archaeological excavations like this are uncommon in Charleston because developers rarely offer the opportunity for researchers to investigate buried history before construction begins. Given that, each of the professors say that this dig presents a unique opportunity.

“The great thing about being in Charleston,” says Harris, who directs the College’s archaeology program, “is that we have so much history buried beneath the surface here. To have this opportunity on campus where students get to come by between classes and excavate is so rare. Really, this is a fantastic opportunity for these students to work closely with faculty in the field and get hands-on experience as well as a realistic idea of what you actually do in this profession.”

This dig, which is revealing what the professors believe was a kitchen outbuilding from the late 19th-century, came about because this site will soon be the location of a solar pavilion. In accordance with federal law, any construction site supported by federal dollars must first undergo a cultural resource survey that may include archaeological exploration. 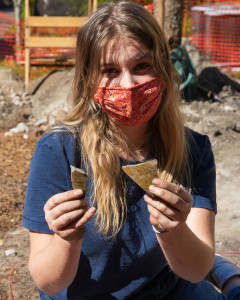 History and archaeology major Audrey Grau displays artifacts collected at the dig site on the College of Charleston campus.

“Under normal circumstances,” Harris explains, “an outside archaeological company would do this work. But as a result of Jim Ward’s years-long effort to draw attention to the College’s internal expertise and the historical value of sites around campus, John Morris, vice president of Facilities Management, brought the project to us and asked if we’d take it on.”

Harris says they jumped at the idea because they knew it would offer great experience for archaeology students.

“I believe this is the first time that an archaeological dig on the College’s main campus has been conducted by our own faculty and students,” Harris adds. “And it’s important to note that by nature, archaeology is an interdisciplinary field. I’m a geology professor, and Jim Newhard is from Classics, but we also have Jim Ward and Grant Gilmore involved from historic preservation. Those are three different academic departments representing three different schools at the College. I think John (Morris) knew that we would bring a wealth of expertise and experience to this project.”

They also brought a lot of attention.

“As soon as we announced it to students and posted a sign-up sheet, the time slots filled up right away,” says Harris. “That’s not surprising because this is definitely a résumé-building opportunity.”

The project was especially beneficial for archaeology major Clayton Moss, a senior who’s been trying for almost two years to arrange field experience opportunities. Unfortunately, the global pandemic stepped in to cancel those plans. So, when he learned about this opportunity, he signed up for as many time slots as he could, and as a result, he’s been gaining significant experience. 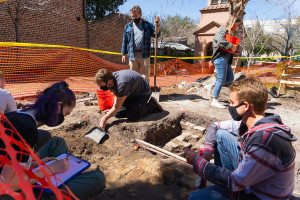 Student volunteers work at the archaeological dig site on the College of Charleston campus.

“I’m learning a wide array of procedures and techniques in part because they’re having us rotate through the various stations,” Moss says. “But even after we close down the site, I’ll be working in the lab with some of artifacts we found. For me, that’s going to be interesting because I personally unearthed some unusual items such as part of a pig’s jawbone and a ceramic sherd with a face on it. I think this site has offered a lot.”

For Ferrell, it’s the hands-on aspect that he finds so valuable.

“Getting experience in the field is really important,” he says. “It’s one thing to sit in a class and learn all these techniques such as setting up grids and scraping away layers and getting familiar with the equipment that’s used, but it’s a whole other thing to actually put that into practice. When it comes down to it, the kinesthetic approach – working hands-on – really complements what you learn in class.

“Plus,” he continues, “this dig has given me a lot more one-on-one time with professors. This semester, I have a class with Professor Newhard, but that course is asynchronous and online, so I don’t see him much. But here, I get to work right alongside him, and I get to meet other students who are interested in or studying this stuff. I even found a shark’s tooth. It’s been one of my best experiences at the College.”