Almost everyone has their own idea of what constitutes fun. For Will Freund ’17, sail-kayaking 1,000 miles up the Intracoastal Waterway from Miami to Norfolk, Virginia, seemed like fun. At least that’s what he told himself back in 2018 when he first hatched the idea.

Since then, this epic adventure on board a 16-foot boat, which he’s dubbed Climate, Kayak and Conversation, has morphed into an awareness campaign that has tested Freund’s mettle and deepened his commitment to fostering a broader understanding about our changing environment. 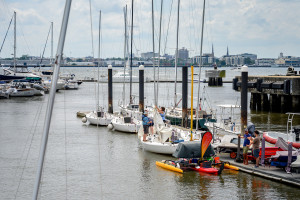 Alumnus Will Freund speaks with an onlooker while docked at CofC’s sailing complex in Mount Pleasant, S.C., in late May. (Photos by Heather Moran)

After graduating from the College of Charleston with a major in biology, and a minor in environmental and sustainability studies, Freund worked for several years as an environmental educator and a coastal researcher. When he hit upon the idea for this adventure, he realized right away that the trip should be about something more than himself. So, his thoughts turned to using the voyage as the basis for creating a documentary film. His mission? Engage residents along the way and learn about their experiences regarding climate change.

“Actually,” he says, “I’m purposely avoiding that term – climate change – because it’s become such a politicized topic. Instead, I ask people how the coast has changed where they live. I ask about environmental changes, species changes, what the fishermen are seeing with their catches – that sort of thing.”

Aside from the documentary he’s creating, Freund has also been chronicling his trip on the project’s website, climatekayakandconversation.org, and on social media (on Instagram, Facebook and YouTube). He started the voyage in the spring of 2020, but the global pandemic forced him to take a hiatus just 17 days into his journey.

“That was really unexpected,” he recalls. “I was about 200 miles into the trip and almost overnight, all the marinas all started shutting down. They wouldn’t take transient boaters like me. So, with very little notice, I had to stop, trailer the boat back to North Carolina and put the project on hold for almost a year.”

Freund restarted the adventure in mid-April of 2021, and since then he’s made his way from Florida, along the coast of Georgia, up through the salt marshes and rivers of South Carolina and into coastal North Carolina. He expects to finish in Norfolk around the fourth of July. He says that none of this would be possible without the key financial support he’s received from equipment sponsors, private donors and grants – all of that channeled through his affiliation with the Environmental Educators of North Carolina.


Under sail, Freund’s little boat can travel at about six miles per hour, and about half that speed if he’s using just the foot-peddles. But a speedy transit isn’t one of his objectives. Having substantive conversations about what people in this region have experienced in the way of environmental change is his real focus.

“I’ve talked with people such as the former mayor of Amelia Island, Florida,” he says, “a recreational outfitter in Beaufort, South Carolina, and commercial shrimpers and fishermen in a bunch of coastal communities. I’ve found that there’s a wide range of beliefs and opinions regarding climate change. We tend to think that people either believe it’s manmade or they don’t, but actually the majority of people have beliefs somewhere between those two extremes. That’s been educational for me. It’s taught me that those of us who want to see more discussion about this and greater awareness, can’t treat it as a binary situation. Ultimately, if we want to get to action on the issue, we have to approach every conversation about climate change with an open mind.” 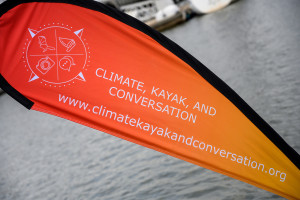 A banner on Freund’s kayak promotes his project and related website climatekayakandconversation.org.

For Freund, the most effective way to get someone’s attention regarding climate change is to find ways for them to experience an emotional connection to their immediate environment.

“People aren’t going to respond if you tell them that the polar icecaps are melting,” he explains. “They’re not going to be moved by the fact that the Pacific islands are flooding. But show them how this matters on a personal level, how changes are happening in their own backyard, and that’s a connection. To do that, we need to get people outside. We need them to get their hands dirty and engage with their environment locally. Ultimately, if you can show them how those things they care about are threatened by man’s collective activities, you can move them to action.”

Freund hopes that individual action on climate change will be the eventual legacy of his Climate, Kayak and Conversation project. When he concludes the voyage, he’ll dedicate his time to editing the footage he’s captured and polishing the documentary. Then, he plans to do some public speaking about this amazing experience. But before all that, he’ll have to safely complete the expedition, navigating his little vessel through the rivers, creeks and waterways that mean so much to him.

“One of the most empowering things about this trip,” he says, “is that it’s shown me once again how connected nature is in every way. It doesn’t care about city borders, county borders, state lines, etc. What happens in one area of nature is ultimately going to affect other areas. That’s just how it is. And given that, it’s clear that we’re all in this together, and we’ve got to understand and address this together. That’s my big takeaway.”

That under the Charleston oaks feeling 😍 #cof

We couldn’t ask for more #CofC Pride if we tried