Above: Members of the College’s Fencing Club enhance their techniques during a practice in 2020.

Wander into the College of Charleston’s recreation facilities at the Johnson Center on George Street on any given afternoon and you’re apt to witness a lot of activity. You’ll see pickup basketball happening in the main gym, squash games taking place on nearby courts and strength and endurance training going on upstairs. And the squeaks, thuds and cheers you hear resonating around the hallways could mean that the men’s club volleyball team is having one of its rousing practices.

Men’s club volleyball is just one of nearly 20 sport clubs active at the College for the 2021-22 academic year. These clubs run the gamut from fencing to baseball to ice hockey and men’s and women’s rugby. According to Gene Sessoms ’80, who directs the College’s Campus Recreation Services office, participation in these clubs is certainly popular, but it tends to vary each year because the clubs are entirely student-driven.

“Not everyone wants to or can play varsity sports,” Sessoms explains. “So, we offer sport clubs for those students who want to try a new sport or continue doing one that they’re already active in. What’s great, I think, is that every club differs regarding its emphasis. For some, such as our Men’s Volleyball Club, it’s very much about playing competitively and growing participation. For others, such as our Climbing Club or the Outdoors Club, it’s more about personal challenge, recreation and camaraderie. And for others such as the Fencing Club, it’s more about passing along the skills and knowledge required to pursue that pastime.” 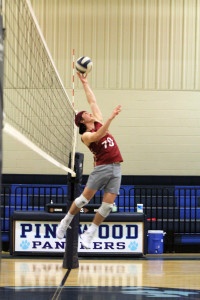 Caden Albert is the president of the men’s club volleyball team.

Caden Albert, who serves as the president of the men’s club volleyball team, is one of several enthusiastic players who have diligently built that sport club over the past three years.

“When I first started here there wasn’t a club,” says Albert, who is a senior double-majoring in secondary education and English. “There had been one before, but most of the players had graduated. So, several of us who wanted to get club volleyball going again proposed the idea to Mr. Sessoms. He was seriously strict about the application process, which I now know is his way of helping ensure that our plan would succeed. And it has. We started with five on the team that year, and we now have almost 30 active players and two coaches!”

Albert explains that the club has an A team and a B team, and only 12 players on the A team travel to tournaments and matches. Still, everyone gets to play during the twice-a-week practices.

“We’re all keen to compete at a pretty high level,” he says, “but we also want everyone to have a chance to play, so we make sure that happens. And, we don’t want this club to fizzle out when those of us who are older graduate, so a number of us proactively promote the club to younger students. Already, we have five freshmen who’ve joined this semester. We’ve got big plans for this year, which include competing at the club volleyball national championships in the spring. That’s the kind of culture that we’re trying to build.”

Jack Brutzer, a junior majoring in marine biology, is working to establish similar success with the Climbing Club. As the club’s president, he says there are about 25 members now. And as many as possible meet once a week at Coastal Climbing – about 12 blocks up King Street from the campus – to climb and make plans. 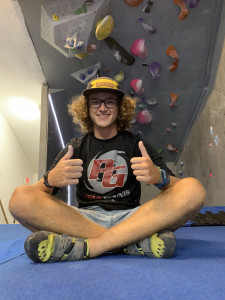 Jack Brutzer is the president of the Climbing Club.

“Some of us are up at the gym almost every day,” he says. “It’s a great club to be involved in. Ordinarily, we climb at Coastal, and then travel several times a year to climb and go bouldering at sites around the neighboring region. We even attend competitions from time to time, but mostly the club is about recreational climbing.”

Brutzer adds that the club is open to anyone interested in climbing or learning to climb.

“I really didn’t have any experience when I joined as a freshman,” he says, “and now I’m running the club and climbing almost every day.”

Having only 25 members is actually an advantage, he says, explaining that it offers a lot of opportunities to make friends and build relationships with fellow students.

“You end up getting to know most everyone in the club that way. And, for me, it’s really the best sport because you get to challenge yourself and then achieve things you didn’t know you could,” he says. “You also have the support of a friend group where everyone is into the same thing. So, there’s opportunity for accomplishment and acknowledgment. It’s pretty satisfying.”

The oldest sport club team at the College is crew, or as most folks know it, rowing. Established in 1990, the Crew Club has remained active ever since. According to Liza Romanova, a senior biology major who is the club’s current president, there are roughly 25 active members, but the club is always recruiting more rowers.

“Anyone who’s interested in rowing, we’re excited to have you join,” she says. “You don’t need experience either, just a willingness to commit to participating and learning. I didn’t have any background in rowing when I joined as a freshman, and it’s been great for me ever since.” 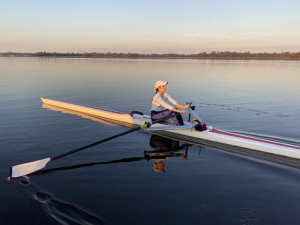 Liza Romanova, president of the rowing club, practices on the Ashley River.

Romanova explains that members ordinarily practice six days a week, with the varsity rowers getting on the water in the early morning and the novices practicing in the afternoon. (She says the club is willing to work around a participant’s academic schedule and no one is required to row six days a week if their schedule doesn’t accommodate that.)

“Our team members row in singles, doubles, fours or eights,” she adds. “We do our conditioning at George Street Fitness Center on the rowing machines, and we do our on-the-water practices out of Brittlebank Park (on the Ashley River), which isn’t very far from campus.”

For Romanova, the best part of this club is the fact that she gets to exercise early in the morning and be part of a cohesive team.

“I love being part of the team dynamic. Everyone who rows knows what it’s like being in these boats,” she says. “It’s intense, but it’s fun and you develop such a strong synergy with your teammates because you have to work so closely together.”

The synergy that Romanova mentions is something that Sessoms sees as a big benefit of participating in club sports.

“What really sets this apart from varsity sports,” he explains, “is the fact that each sport club is organized and managed by the students themselves. The students don’t just play these sports, they also handle the logistics, the organization, the fundraising and the management. If the team travels to compete or participate, the students have to arrange all that. My office works with them and provides some funding, but the team members shoulder the lion’s share of the load when it comes to raising additional funds to pay travel expenses or to hire referees or buy equipment, etc. So, these students take on a lot of responsibility to participate in their chosen sport and that ordinarily leads to a lot of personal growth.”

For Sessoms, it’s gratifying to see how active these teams are now.

“We actually have more students competing in club sports than we have student-athletes at the College,” he says. “And my primary goal for this year regarding sport clubs is to have all our programs be purposefully inclusive. That’s why we really don’t have tryouts on these club teams. If you want to participate, you can, and you’re readily welcomed. We really want as many students involved as want to participate. For the College, I think that’s a win-win.”

To learn more about sport clubs at the College or connect with club representatives, visit campusrec.cofc.edu.