Imagine a national champion who suffers from imposter syndrome. That may be hard to believe, but that’s just how sophomore Dyllon Gunsolus felt as he moved through last summer’s competitive cycling season. As a member of the Oceanic/Longshore Boats Racing Team, he’s spent the past year competing in an elite realm, something akin to the semi-pro ranks of any other sport.

In late August 2021, he was invited to represent the College of Charleston at the USA Cycling Collegiate Track National Championships in Indianapolis, Indiana, Sept. 9-11. He had only eight days to prepare, but despite that – and his doubts about his abilities – he performed superbly. Gunsolus not only took home a gold medal in the time-trial event, he placed second in the flying time trial and fourth in the sprint. For a team of one, it was a very impressive outing. 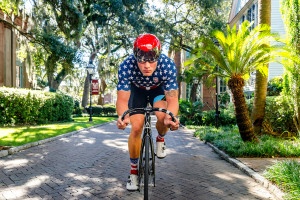 “Winning a national title is surreal,” he says. “I don’t think it has really sunk in even now.”

The feat is even more impressive considering that Gunsolus, an international studies major at CofC, has only been competing in top-tier cycling events for two years, ever since a running injury halted his aspirations to compete in track and field. But the allure of competitive cycling goes way back to his boyhood days in Kenosha, Wisconsin.

“I can trace it back to when I was in elementary school,” he offers. “In the summer, I would ride my bike down to the lake to watch the sunrise. Well in July, there’s this weird thing on television in the mornings called the Tour de France. I was drawn to it because I had a fascination with Europe, and you get to see so much of the landscape in those broadcasts. That was about the time that a rider named Mark Cavendish from the U.K. was rising in fame. I can remember a huge sprint finish and the announcer excitedly calling out Cavendish’s name, and I was just glued to the TV. I told myself at the time, ‘I want to do that.’”

That summer, Gunsolus mowed lawns and saved up enough money to buy his first road bike.

“It was a used 1983 Schwinn Super LeTour,” he recalls. “I rode that a lot and I watched the Tuesday night races at the velodrome. Kenosha has the oldest operating velodrome in the country. But I was always on the outside of the sport and could never afford to jump into it until I finished my military service.”

That’s right, prior to pursuing competitive cycling and enrolling at the College, Gunsolus served five years of active duty in the U.S. Marine Corps with posts in various parts of the U.S. and abroad. (That’s why he always competes with a red headband bearing the Marine Corps emblem of the eagle, globe and anchor.) Shortly after enlisting, he was selected to compete on the All-Marine Triathlon Team.

“I was a pretty competitive runner and an OK swimmer,” he says, “and had some experience cycling, so they added me to the team. I got to compete in a lot of places, including a triathalon in Spain. But once my military service was over, I finally had the chance to become certified to compete in velodrome races – so I jumped fully into it. I got certified to ride at the velodrome in Rock Hill, in the Upstate.” 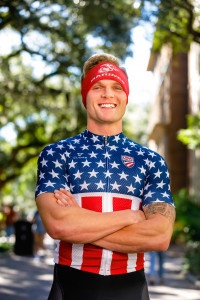 Following his service in the U.S. Marines, Gunsolus decided to become certified to compete in velodrome races.

Fast forward to this summer and the collegiate nationals and Gunsolus says he felt a sense of relief winning that national championship time trial.

“I entered the season with a fair bit of stress actually,” he recalls. “In advance of competing in my first two national championships, I found that one of the biggest challenges was dealing with something people call imposter syndrome. Here I was competing at the elite, national, pro level, but I didn’t really feel like I belonged. I was waiting for people to see through me and tell me that I shouldn’t be there. At the elite nationals in July, and even though I won a medal, I didn’t really perform well. That was tough on my mental outlook, and tough on my body as well.”

Gunsolus realized that he had to try and dial down the pressure that he’d been putting himself under and focus on the fun.

“I have two great mentors in the sport,” he continues, “and they worked with me to help keep me positive and not let me overthink the next competition. I told very few people that I was going to the collegiate nationals. And when I found myself at the starting line for the time trial – the final event of that competition – the pressure was off. I wasn’t antsy or tense, and my heart rate wasn’t high. I realized that I had the experience to do well, but if I didn’t, that was going to be OK. I think just being relaxed and positive led to the best outcome for me, and I won that event by a little under a tenth of a second.”

What’s next for Gunsolus? For now, he’ll keep training and may even establish a cycling club at the College. But he’ll also continue focusing on his major (and a minor in Russian studies). He hopes to one day work for the U.S. government, perhaps in the Department of State. Wherever he ends up, it’s clear that he’ll find the best way to tap into his potential, overcome any insecurities and excel.