When Marcus Hammond ’09, attended the College of Charleston, he didn’t have a lot of free time. As a business administration major and captain of the men’s basketball team, when he wasn’t in class or studying, he was on the hardwood practicing or playing. His collegiate life was very busy. These days, he’s still involved in the game – as an assistant coach at Charleston’s Burke High School – and still as busy as ever.

Hammond spends his days crunching numbers, working in finance as a premier banker with Wells Fargo. After work, he suits up to help young athletes grow as players and individuals. And despite this active schedule, he’s found time to become a social entrepreneur having recently created Charleston’s first-ever Black Food Truck Festival. 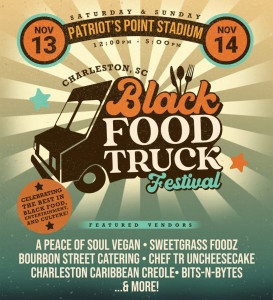 Scheduled for Saturday and Sunday, Nov. 13-14, 2021, this event will bring together a variety of diverse culinary options, along with a wide array of musical entertainment. The event runs from noon until 5 p.m. each day. Tickets are available online on the event website (blackfoodtruckfestival.com; $15 for both days; $10 for one day). Attendees are encouraged to purchase tickets in advance.

“I’m really excited about what we’re doing,” Hammond says. “We’ll be putting on a fun, family-friendly event that we hope will touch all the senses. There will be amazing food, and some of the best musical entertainment in the Lowcountry with our DJs and the bands that will be playing. My hope is that everyone who attends will be impressed by the culture on display, and that definitely includes the visual aspects as well. Ultimately, we’re doing our best to ensure that everyone has a wonderful time learning about some of the great Black-owned food trucks that we have in our area.”

When Hammond uses that pronoun – “we” – he’s speaking broadly.

“One of the people I’m working with is Jabari Seabrook ’07,” he says, “who used to run the Southern Fried Chicken Challenge. But there are a lot of people involved, so I say ‘we’ as my way of showing the love to all the vendors who are taking a chance on this event, the venue providers and all the people who will be coming out to attend.”

Citing his inspiration, Hammond says he hit upon this concept after attending a food truck festival in Charleston several years ago.

“I went to what was called a food truck rodeo a few years ago,” he explains. “It was really well organized and there were a lot of food trucks there and a crowd of people attending, but there weren’t many people who looked like me. Given that, it didn’t capture my attention. I had a bite to eat, but I didn’t stick around. Right away, I figured out that I should probably create my own food truck event. That experience taught me that there definitely was a need in our community.”

Though he began developing the concept for a Black food truck festival in late 2018 – and things were beginning to gel a year later – the pandemic disrupted his plans like those of so many others.

“All throughout 2020,” he says, “I really wanted to make this thing happen, but it wasn’t the right time. Then, six months ago, I realized I had to do it. So, I proposed the idea to the directors at the Charleston Battery because I wanted to use the space they share with the College at Patriots Point – the pavilion by the soccer stadium. It’s the perfect venue. And the people at the Battery were great. Right away, they loved the concept and thought it would be good for the community. So, they started planning with me.”

He decided that the first food truck operator he would approach would be Folami Geter, whose Columbia, S.C.-based business – A Peace of Soul Vegan Kitchen – has been in operation for over a decade.

“I knew that if she committed to coming others would as well,” says Hammond. “Her business has a huge following in the Columbia area and she’s well-respected in the industry. When she told me she was in, I knew this thing would work.”