Monday, Nov. 22, 2021, was a big day for Teena Ham. Not only did she compete in the National Gingerbread House Competition in Asheville, North Carolina, but – later that night – she was on the Food Network’s Holiday Baking Championship: Gingerbread Showdown! 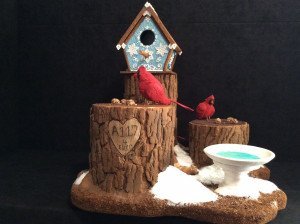 “At least if I get my tail kicked by the other amazing gingerbread extremists at nationals, I can just think, Well, I’ll just go watch me on TV, since this is over,” the training program coordinator in the College of Charleston Division of Information Technology laughed before the show aired. “Either way, I’ll be watching the TV peeking between my fingers. Even though it’s been neat seeing myself on the commercials for the show, it really is stressful to see yourself on TV!”

But, let’s be honest: Compared to competing against two other teams with cameras filming your every move and celebrity judges critiquing you – and knowing that it’s all going to be aired on national television – watching the show will be a piece of cake.

In each of the five episodes of Holiday Baking Championship: Gingerbread Showdown, which is hosted by Jesse Palmer of The Bachelor (season 5), three teams of the nation’s best gingerbread artists and their baking assistants face off, creating gingerbread builds and a surprise dessert based on a specific theme. For Ham’s episode, titled “Have Yourself a Scary Little Christmas,” the theme was Monster Christmas. 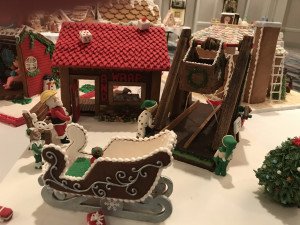 “That theme fit in really well with my personality – I thought it was the coolest thing ever,” says Ham, adding that the contestants were given their theme ahead of time, allowing her to work with her network-assigned teammate, Cashe Clark, to plan out their creation. “That gave us a chance to talk a little bit and collaborate. She did a fantabulous job with the surprise dessert they gave us, too. She’s very, very talented.” 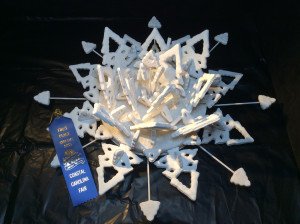 “It all happened really, really fast. Honestly, it’s still happening fast – I don’t think it has really hit yet,” she continues. “And I couldn’t talk a word about it to anybody, so I just told everybody I was going to go do a gingerbread thing for a week. And it was a gingerbread thing – just on crack!”

Ham adds that, while contestants are able to bring their own “naked, baked but not structurally put-together sheets of gingerbread” to the show, once they are on set, they only have 10 hours to focus on building their gingerbread creations. 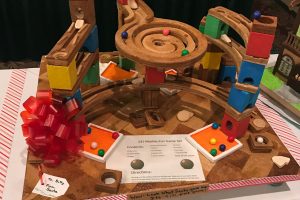 A working marble game made completely of gingerbread and other edible materials that Teena Ham submitted to the National Gingerbread House Competition in 2017.

“It was kind of funny how hyper-focused I was at times. I honestly forgot the cameras and judges and other contestants were there because I was concentrating so hard,” says Ham. “You’re so focused, you don’t have time to notice what other teams are doing or connect the dots, really.”

Besides, that’s the job of the judges – Kardea Brown, Lowcountry chef and host of the Food Network’s Delicious Miss Brown; Nacho Aguirre, who has sat on the judging panel for several Food Network shows; and Breegan Jane, interior designer for HGTV’s Extreme Makeover: Home Edition ­­– who have to decide which of the talented teams wins $10,000 worth of festive prizes every episode. 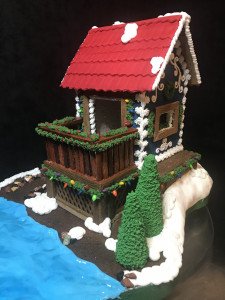 “It’s a one-and-done type thing – not one of those that carries over from week to week, thank goodness,” says Ham. “I could never do the thing where each week they eliminate somebody. Because, one: I’d be terrified I’d be the first one out and be humiliated forever – even though I’d know it’s amazing just to be on the show. And then, two: It’s just the pressure. I probably would have had a heart attack before it was over with.” 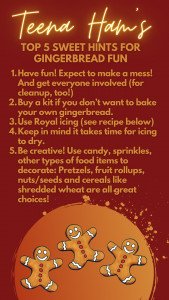 Not that Ham isn’t accustomed to the pressure of competitions. She has been competing regularly since 2013 – seven times in the National Gingerbread House Competition at Grove Park in Asheville, North Carolina; four times at the South Carolina Gingerbread Creation Contest in Summerville, from which she has taken home the first prize three years in a row; and twice in the Gingerbread Trail in Savannah, Georgia, where last year she won the Notable Builder Award for Originality.

RELATED: Read more about Teena Ham and her gingerbread art.

“I love the challenge of competing,” says Ham. “But, honestly, my favorite thing about it is congregating with other competitors. It’s a neat little group that we have. We’re a big family. And we like to cheer each other on and see what everybody’s doing, what ideas everyone has had.”

Coming up with ideas, says Ham, is sometimes the most difficult part. 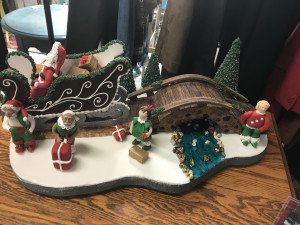 “Especially for nationals – because it really is a crazy hard competition – you want to make something that is difficult and challenging, but also cute and fun. And you need to feel inspired,” says Ham, adding that she never knows where she’ll find inspiration – a water fountain in the Cracker Barrel gift shop, a toy trebuchet in a craft store, a stalk of celery in the grocery store. “I get my ideas in the weirdest places – I could be putting laundry in the washer and I’ll just see something and think, I wonder if I could do that out of gingerbread. Would it work? That’d be pretty cool. I want to try it. And then I can’t get rid of that thought. I just have to try it.”

But creativity is only part of it. It’s also project management and, of course, science. 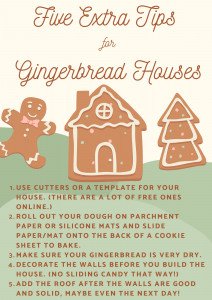 “Not only are you working with chemistry – What makes a bubble in a gingerbread? What makes it rise? What doesn’t make it rise? Does the temperature make a difference? – but you always have to think about scale with everything,” says Ham. “So, yeah, there’s science and math involved. And a whole lot of planning. And then you have to remember, it is supposed to be fun, too!”

And that’s what it’s all about.

“It’s a fun family experience, so don’t stress out if your walls aren’t square or your roof doesn’t quite reach or whatever,” says Ham. “Those things do happen. You know, it happens. Just have fun with it and, you know, put a dinosaur on it!”

Ham certainly knows how to have fun with her gingerbread creations – and, for her, the fun is in the details.

“I love fine-tuning – adding those tiny minute decorations or just putting on those final touches,” she says, noting that – when she’s not in full-blown competitor mode – she also has fun sharing the experience with people, including her grandson. “That’s what really brings it to life.”

Teena’s episode of Holiday Baking Championship: Gingerbread Showdown aired on the Food Network on Monday, Nov. 22, 2021, at 9 p.m. It will air again on Sunday, Dec. 5, at 5 p.m. and Monday, Dec. 13, at 4 p.m. It is also available on demand through Food Network Go, Discovery+, Hulu, Roku, Peacock and other streaming services. 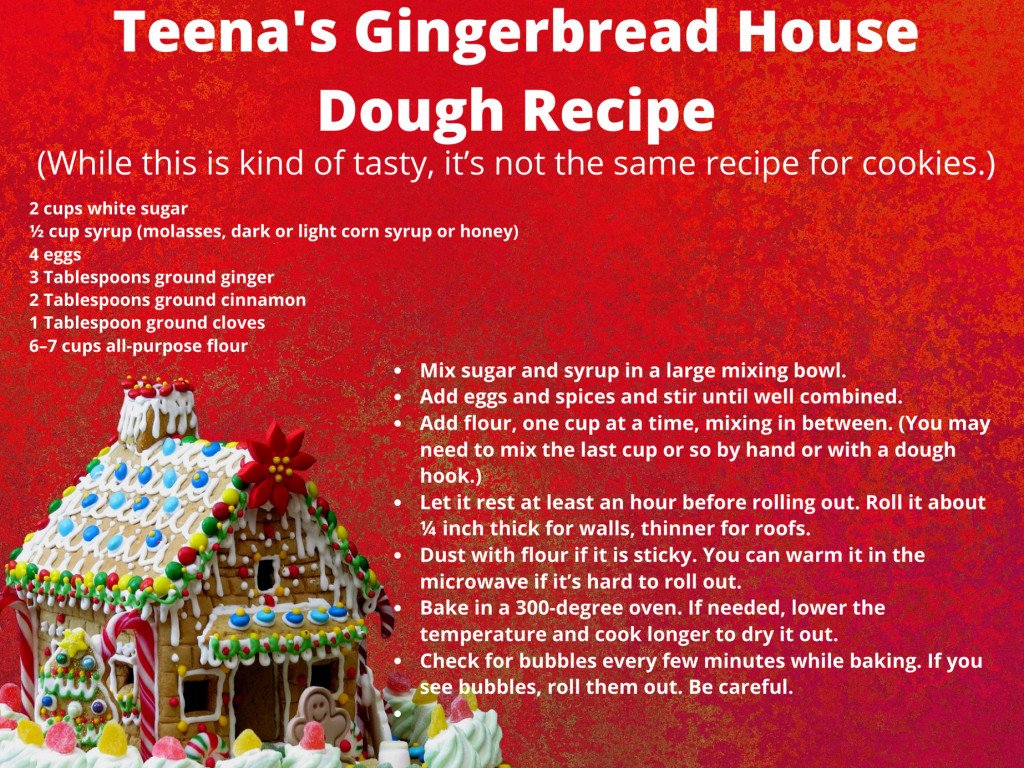 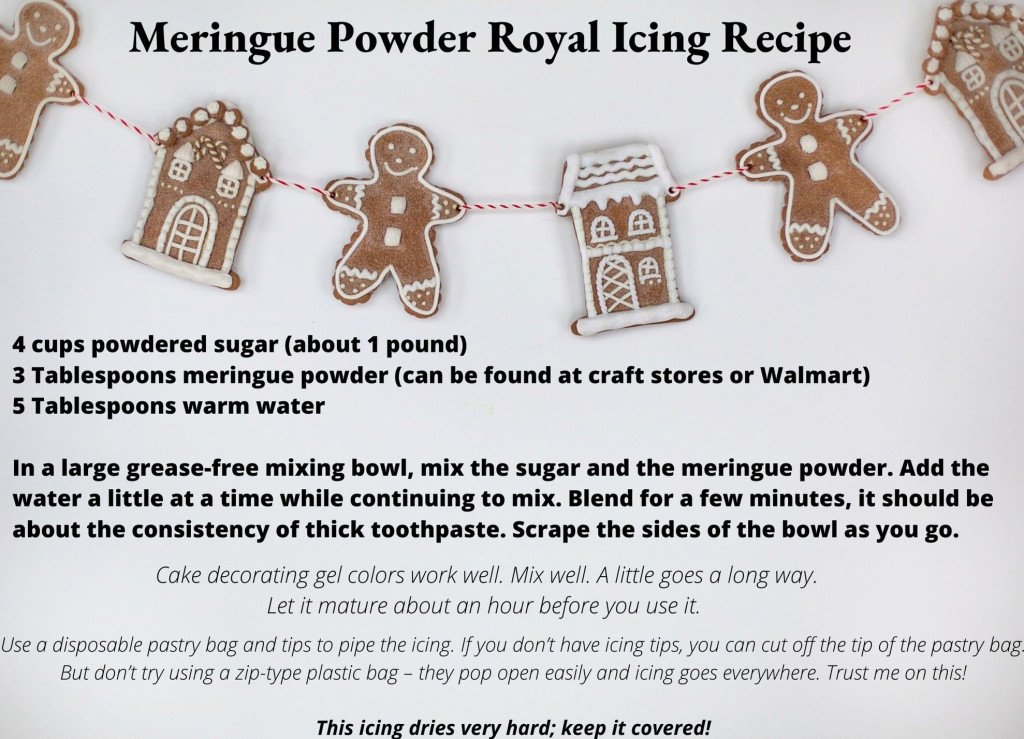