When you know, you just know. That indescribable-yet-visceral notion of certainty is familiar for sophomore Chase Austin. He’s experienced it several times in his young life. Among the first was when he toured the College’s campus as an eighth grader. Something clicked, and he knew right away that this was where he’d go to college.

More recently – in the fall of 2020 – he had a similar gut-level epiphany. It was the first day of classes at CofC for this student in the Honors College.

“I was sitting in the intro to geology course,” recalls Austin, “and my professor [Vijay Vulava] mentioned that a new major in environmental geosciences would debut the following year. Even though I’d spent my senior year of high school in Germany and had been considering a path toward international studies, I knew right then that this was the major for me.”

Austin, who is also majoring in German, has long been passionate about environmental topics. As a youth growing up in Hollywood, South Carolina, he vividly remembers learning about the BP Deepwater Horizon oil spill.

“I was barely 8 years old then,” he recalls. “I remember TV images of seabirds bathed in oil, the beaches and swamps decimated, dead birds everywhere, and people just stunned. It was horrifying, and I was so confused. How could something like this happen? Who would allow that?”

Several years later, he and his mother started driving down to Edisto Beach on a regular basis to observe the sea turtle patrols at dawn. He says those experiences cemented his interest in all things environmental. 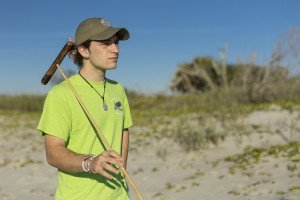 “We spent a lot of time informally shadowing those people,” he says. “It became clear to me that I wanted to be outside in nature. I think that’s why I’m drawn to environmental geosciences. For me, this field is a big-picture mix of geology and environmental science. It’s really the perfect discipline because it looks at how the many elements of the environment function and how those are impacted by man’s activities.”

Post-graduation, Austin sees himself working in endangered habitat protection, and he took a significant step toward that goal this past summer. As a research intern with the South Carolina Marine Turtle Conservation Program, he was at Edisto Beach by 6 a.m. every morning to help monitor loggerhead turtle nests along a mile-and-a-half stretch of sand. Working under a special permit from the South Carolina Department of Natural Resources, the team’s responsibilities included egg and nest counts, getting DNA samples and even assisting hatchlings that were left behind in the nests after a few days.

“That was seriously one of the most fun things I’ve ever done,” he says. “This massive life web and the interrelation of all its components intrigue me. In environmental geosciences, you study erosion, climate issues and natural disasters, among other topics, and that’s all very applicable. I want to be in a role that enables me to examine those big-picture connections.”