When senior English major Tony Jackson agreed to do a podcast about Eugene Hunt, he didn’t know it would become a yearlong project.

Valerie Frazier ’91, associate professor of English and director of the 1967 Legacy Program, had suggested he create a podcast that could be a resource for incoming Legacy 1967 Scholars. Jackson readily agreed.

“That was before I knew how complicated it was to make a podcast,” jokes the student mentor. 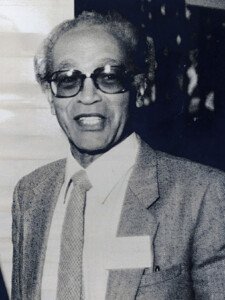 It was also before he knew much about Hunt, who became the College of Charleston’s first African American man with a full-time, tenure-track position when he accepted a post as assistant professor with the Department of English.

“As I was going through the process, I realized that I wanted to expand the story of Mr. Hunt so listeners would see him as a whole person – someone who is more than a piece of history,” says Jackson, who wanted the podcast to be conversational in style and include several voices with different perspectives.

RELATED: Learn more about Eugene Hunt and his female counterpart at the College, Owilender Grant.

To do this, he recorded conversations with people who knew Hunt and could fill in the gaps of his story, including Millicent Brown, one of the first African American students to desegregate formerly all-white public schools in South Carolina – whom Jackson was thrilled to talk to.

His next step was a series of trials and errors as he learned how to edit and produce the audio. The result is a compelling, brilliantly executed 30-minute recording, available on his The Black Experience podcast, which explores the history of campus and the CofC experience from the perspective of people of color.

“I didn’t realize how recent all of this history was, and it made me wonder what changes are being made now,” says Jackson. “It was really interesting to hear other people’s stories and ask questions I never got to ask before about the Black experience on campus.”

He decided to keep the project going and continues to record episodes for his podcast – each one with a different theme that amplifies the voices of people of color on campus.

Frazier is happy that Jackson ran with her idea.

“I have loved collaborating with Tony over the years and seeing such an ambitious, driven, student thrive,” she says. “He reminds me of this Oprah Winfrey quote: ‘If you really want to fly, harness your power to your passion. Honor your calling. Everybody has one. Trust your heart and success will come to you.’ And for Tony, it has.”

After graduation, Jackson plans to go on to graduate school, bringing the podcast with him to continue the conversation.

Frazier, for one, has no doubt that he’ll succeed.

“Over the years, Tony has shown himself to be first rate as an undergraduate student and leader,” she says. “Tony’s critical thinking skills, work ethic and leadership skills have served him well and will continue to do so in the future.”