At a meeting of the South Carolina State College Board of Trustees on July 19, 1972, the president of the College of Charleston announced the hiring of the institution’s first full-time African American faculty member.

President Ted Stern made the announcement as part of a report regarding 1972 fall semester plans. According to meeting minutes, Stern reported that “a full-time faculty of 90 has been appointed including one black faculty member.”

And that was it. Five years after the first African American students enrolled at the College in 1967, the school’s doors had been opened to African American faculty. According to the book A History of the College of Charleston 1936-2008, by former English Professor Nan Morrison, Owilender K. Grant joined the Department of Mathematics as the College’s first full-time, tenure-track black faculty member.

One year later Eugene Hunt became the second black faculty member, and, according to Morrison’s book, the first African American man to be awarded a full-time, tenure-track position when he accepted a post as an assistant professor with the College’s Department of English. He also worked at the College as a visiting lecturer in public speaking in 1972. 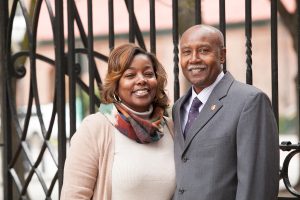 Andrew Lewis, an associate professor emeritus in the College’s Department of Health and Human Performance, was among a group of four more African American faculty hired in 1974. Brought on by Stern to join the College’s newly created Department of Physical Education and Health, Lewis — who was 24 at the time — says the racial climate on campus back then was tense. He added that the leadership and support Grant and Hunt offered their younger counterparts was invaluable.

“They were a little bit older than the group of four African American professors who started in 1974,” says Lewis. “So, to us, they became mentors, showing us how to navigate some of the hurdles on campus, demonstrating how to work together with administrators and offering insight into some of the issues they had faced in the time that they were here.”

Both Grant and Hunt were South Carolina natives; Grant was born in Colleton County in 1929, and Hunt was born in Charleston in 1916. They each began their careers as public school educators in the state’s segregated K-12 schools. Hunt spent the bulk of his years in the classroom at Burke High School in Charleston where he taught from 1941 to 1972. Grant first taught at Colleton High School in Walterboro before also joining the faculty at Burke.

After joining the College, Grant went on to complete a doctorate of philosophy in mathematics education from the University of South Carolina in 1978. A year prior she was promoted to project director for the College’s Upward Bound program, which offers support to a college preparatory program aimed at supporting minority high school students. She left the College in the early 1980s. Grant later joined the faculty at Saint Augustine’s College (today known as St. Augustine’s University) in Raleigh, North Carolina, where she served as chair of the math department and then the school’s Division of Natural Sciences.

Hunt, who obtained tenure in 1979, became a leader on campus. As a graduate of the Avery Normal Institute, he was part of a group of graduates that worked with the College to create the Avery Research Center for African American History and Culture. He also helped curate the center’s exhibit “Avery: The Spirit That Would Not Die.”

RELATED: Looking Back at the Avery Normal Institute

Following his retirement in 1992, the College awarded him an Honorary Degree of Doctor of Humane Letters in 1993.

Lewis, who has worked at the College for 36 years, has served in a variety of leadership roles including as associate dean of the School of Education, Health and Human Performance and director of the Office of Professional Development in Education. He made history of his own as the College’s first African American department chair in 1991 when he became chair of the Department of Health and Human Performance.

The journey of these pioneering African American faculty was one of great difficulty as they faced discrimination from both students and colleagues in those early years. And for Grant and Hunt, Lewis says, knowing the College’s difficult history regarding integration, makes it that much more remarkable that they pursued faculty roles.

“I think they took that leap because they were willing to carry the burden to make it better for those of us coming behind them,” he says.

And for Lewis, the encouragement from Grant and Hunt was essential to his own historic journey at the College, especially when he was confronted with the bigotry of the times.

“They (Hunt and Grant) would always say ‘don’t be what they want you to be or expect you to be, be different,’” he says.