During the demolition of a section of the 42-year-old Albert Simons Center for the Arts this spring, workers made a remarkable discovery. Embedded in one of the internal walls of the building was a metal box about the size of an old Samsonite suitcase. As the workers extracted the box from the wall, they found the date “9/9/1977” stamped on top.

The workers had unearthed a time capsule. And School of the Arts Dean Edward Hart ’88 viewed the box as a unique opportunity. 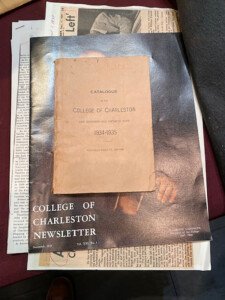 A 1934 course catalogue and newsletter from 1972 were among the items found in the time capsule.

“I have a certain PT Barnum part of my personality and thought that we can make something really fun with this,” he said.

Hart told only a handful of people about the discovery and swore them all to secrecy. After some debate, it was decided the newly found time capsule would be opened and revealed on Thursday, Sept. 22, 2022, during the School of the Arts seasonal reveal and fundraising event Behind The Curtain.

Hart says there was a lot of speculation on what might be inside the mysterious metal box. “The only clue we had is the date 1977 stamped on the box,” he says. “So naturally you think it’s going to be something like platform shoes, a disco record or it could be just a big practical joke. Who knows?”

After stashing the box in his office for over 6 months, Hart finally took the stage with the time capsule on Thursday night in front of a packed crowd of hundreds of art patrons in Sottile Theatre, where students had performed piano solos and chamber music for violin, cello and piano.

As the day approached, Hart kept thinking of a similar moment in 1986 when Geraldo Rivera opened the vault of Chicago gangster Al Capone during a live two-hour primetime television special. When that vault was opened, the only things found inside were dirt and several empty bottles.

Hart hoped for a better reveal – or at least a more exciting one. 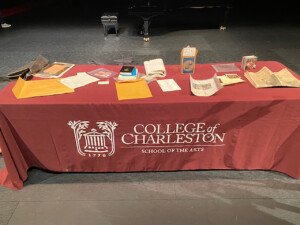 More than a dozen items were removed from the time capsule. (Photos by Mike Robertson)

At precisely 9 p.m. the time capsule, resting on a table, rose from the orchestra pit to the main stage in the Sottile Theatre amid smoke and lights. Sculpture professor Jarod Charzewski joined Hart on stage with tools to open the copper-colored box. Also on stage was John White, dean of libraries. He wore white gloves in case artifacts needed to be gently removed.

Minutes later, the box was opened and over a dozen items were pulled from the time capsule. Objects included a College of Charleston course catalog from 1934, construction photos and blueprints of the Simons Center, a 1972 College of Charleston newsletter, a small box filled with military insignia patches, among other items.

White says the items pulled from the time capsule will be researched and eventually become part of the College of Charleston’s permanent archives.

Hart says they are considering creating a new time capsule to place in the Simons Center when renovations are complete. The big question is what should be included. Hart says it should be “something that reflects the moment and the people that were involved with the moment.”