The 2022-23 NCAA basketball season got underway this week. And the College of Charleston’s men’s basketball team began its march toward a conference championship, winning their first home game of the season against U.T. Chattanooga 85-78.

Now in his second year at the College, men’s basketball head coach Pat Kelsey has assembled a diverse team of six returning players along with nine new faces. And with a lot of buzz in the air about this year’s team, The College Today sat down with Kelsey ahead of Monday’s game for a preview. The Cougars will take on UNC at Chapel Hill on Friday, Nov. 11, 2022. 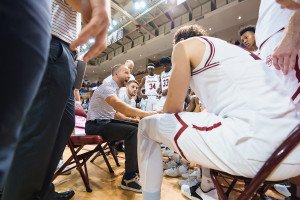 Pat Kelsey talks to players at a game during the 2021-22 season. (Photos by Mike Ledford)

Coaches across the Colonial Athletic Association have chosen your team to finish fourth in the conference this year. Can we put any stock in that?

We’re in a new age of college athletics and college basketball because of changes to the transfer portal. So, many teams have new players these days, and so many players are adjusting to new systems that I think it’s difficult for preseason predictions to be accurate. So, my coaching staff doesn’t put much stock in those predictions, but we do use them as motivation with our players because our aspiration is to win a championship. What preseason rankings mean relative to what happens at the end of the season in March, well they’re not very relevant.

You’ve got six returning players from last year and five of them saw significant playing time. Is that sufficient continuity for success?

No question. We preach culture all the time. And there’s an old saying: ‘Culture eats strategy for lunch.’ Don’t get me wrong, strategy is important. You must have an offensive philosophy and a defensive philosophy, which we do, and you have to know what coverages you’re going to deploy and all that, but in any organization, your culture has to be running through everybody’s veins. Last year, it was challenging because we only had two returning players and the rest of the roster was new. And those two returning guys played under a different system. So, to have six guys back from last year who eat, drink and sleep the core principles of our program gives us a great head start. Last year, we started on page one. This year, we’re starting at chapter five.

The other thing is that four of the guys you’re referring to – Reyne Smith, Raekwon Horton, Babacar Faye and Ben Burnham – were true freshmen last year. Despite that, they each played significant minutes and garnered lots of experience. I think we got through last season pretty well and we were definitely playing our best basketball in March. We competed well in the conference tournament, narrowly losing in a semi-final game on a really, really difficult block-charge call by the officials. I’d like to think that all four of these guys are now the equivalent of juniors rather than sophomores due to the playing time they’ve had.

And, of course, we have Dalton Bolon back. He didn’t play last year due to an injury, but he was with us at practice, at games, in the locker room, and he’s just a tough, battle-tested guard that was a Division II All-American. So, he helps with continuity as well. And Charles Lampten is also returning. He’s a veteran post presence who impacts the game in a major way, especially at the defensive end. Charles protects the rim and rebounds very well.

You’ve also got some dynamic new players. Can you tell us about them?

We’ve got three scholarship freshmen, but one, Khalil London, will redshirt this year because he suffered an injury. Apart from him we have Evan Kilminster, a point guard from Australia, and Jordan Crawford, a shooting guard from Charlotte. Those two guys are going to be playing behind some very experienced and talented players. That doesn’t mean that these first-year players won’t make an impact on the floor this year, because they very well may. But it’s tough when you’re playing behind older players. I think it’s a great situation for them because they’ll be able to learn so much and they won’t have so much pressure on them.

We also have an extremely important group of walk-on players that add depth and leadership to our roster. They do a tremendous job preparing our team behind the scenes. I was a former walk-on when I played, so nobody appreciates their contributions more than I do. This group includes freshmen Frankie Idlett and Spencer Legg along with sophomores Dylan Ritter, Jack Miller and Adam Comer.

And, we’re really excited to have three graduate transfers: There’s Pat Robinson, a Division II All-American, and Ryan Larson, who as a point guard at Wofford started over 100 games. That’s a very good program with terrific coaching. And then we have Jaylon Scott, who was the runner-up national player of the year in the NAIA (National Association of Intercollegiate Athletics). He looks like an NFL linebacker. He’s as big and strong and physical of a guard as you’re going to see anywhere.

Those three guys really bring a veteran presence, and they’re each committed to our team-first mentality as opposed to focusing on individual accomplishment. Our program’s culture is focused on three things: relentless effort, competitive excellence and most importantly, the power of a team. We put a deliberate focus on team over individuals — that’s giving of yourself for the good of the team. It requires a selflessness and an uncommon commitment to the guy next to you. And all our new guys are about that.

Basketball fans in the CAA always worry about an undersized team. Is the fact that the Cougars have just four guys 6’7” or taller a concern?

I think we’re a pretty big team, actually. Charles Lampten is 6’11”; Ante Brzovich is 6’10;” Babacar Faye is 6’9;” Benny Burnham is 6’7” and a half or 6’8”; Jaylon Scott is a big wing at 6’6” and Raekwon Horton is another big wing at 6’6.” And Dalton Bolon is a big guard at 6’5.” Then there’s Pat Robinson at 6’2,” but he’s a strong, physical dude. Yes, we have smaller players on the roster, but my mentor taught me it’s not how big you are, it’s how big you play and our players are tough, tough guys. Actually, one of the key things we teach is toughness and physicality; those are two strengths of this team. I mean, I’m 5’9”, but I live by what my mother always told me, ‘It’s not the size of the dog in the fight, it’s the size of the fight in the dog.’

When the season opens on Monday night in TD Arena against the University of Tennessee, Chattanooga, is there anything in particular you’ll be looking for from the team?

U.T. Chattanooga was a very good team last year. I expect them to be very good this year as well. They were a championship contender in their conference, and they’ve added impact transfers and have a nationally respected coach. For us, we look at each game as a test, and the Chattanooga game will be a good litmus test regarding the development of our players. Keep in mind that the season is a long journey. It’s a marathon, and we know there will be ups and downs, but the key to competing for a championship is playing your best at the right time of the season. You want players to constantly be getting better as the season progresses. That’s always our goal. Obviously, we want to win every time we lace up and get on the court, so the Chattanooga game will be a good metric of our progress.

How do you feel about the team’s progress at this juncture?

I like where we are at the moment. We’ve had a good pre-season, a phenomenal summer and the guys are ready. Honestly, they’ve been playing each other every day in practice and beating each other up so much they’re really ready to play against somebody else. And that will be the first step in a long journey toward March. There’s an old Chinese proverb that says a journey of a thousand miles starts with a single step. That step was our first day of practice. Monday’s game, when the lights come on in TD Arena, will be our first major step.

Is there anything else you want to share about the coming season?

We’re trying to build something special with this basketball program at the College. College basketball is one of the best things going in sports anywhere in the world, and a big part of that are the fans. For us, it’s a true game changer when the students and the community turn out for a game and they create a sixth man. I just want our fans to know how much they mean to us and how important they are to this program. We invite everyone to come out to TD Arena for our games, and not just for entertainment, but to be a factor.