“The Artistic Heartbeat of Charleston.” That’s the tagline that has advertised the College of Charleston’s School of the Arts for the past two years. And a big part of that claim is rooted in the Halsey Institute of Contemporary Art. For almost 40 years, the Halsey has served the Charleston community by showcasing the work of innovative visual artists from around the world. And on Friday, Jan. 13, 2023, the gallery will open its 121st exhibition – a two-person show featuring the photography of Elizabeth Bick and the weaving of Jovencio de la Paz. 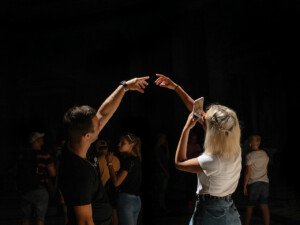 “Pairing a photographer and a weaver together might seem like works in opposition at first,” explains Katie Hirsch, director and chief curator for the Halsey Institute, “but both Bick and de la Paz consider rhythm, sequence and chance in their artistic practices. They each ask us to reconsider something very familiar to all of us, the landscape of public space and the conceptual limits of cloth.”

Elizabeth Bick, who directs the photography program at the College, is presenting Contrapposto, a show that includes both new and ongoing series of her work. Several of the images on display were made in New York City and Rome, Italy, and reflect on the rhythms, performances and nuances that unfold in public spaces. Bick’s photographic practice includes a prolonged gaze in a specific place, such as a street corner or the Pantheon, where she can observe dramatic movement as well as light and shadow as they form a spectacle through her lens. In her work, pedestrians are choreographed dancers and sidewalks become stages.

Jovencio de la Paz is an artist, writer and educator whose work explores the intersection of textile processes such as weaving, dye and stitchwork as they relate to the broader concerns of language, histories of colonization, migrancy and ancient technology. In this particular show – The Ends of Rainbows – de la Paz presents three new bodies of woven and stitched works. 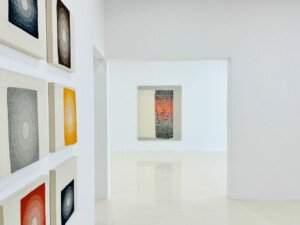 The pieces in this show range from textiles designed using an algorithmic software based on a 1950s code that visualized Darwin’s theory of evolution to weavings made together with de la Paz’s mother and grandmother. Collectively, these works will contemplate issues of ancestry, genealogy, mortality and memorial through the construction of cloth.

“At the Halsey, our curatorial team enjoys keeping visitors on their toes, both with the radically different artwork that we present and the ways in which the gallery spaces change from exhibition to exhibition,” notes Hirsch. “Both Bick’s Contrapposto and de la Paz’s The Ends of Rainbows do just that. Visitors can also enjoy interview videos with these two artists in our Video Cavern, which offer great insight into the inspiration behind both exhibitions.”