Joy Vandervort-Cobb has a voice that can be heard across the world. And, as a voiceover artist, an actor, a teacher, a director, a mentor, an advocate and a friend, she knows just how strong that voice can be – and exactly how to use it.

But when she learned she’d won the 2023 MLK Humanitarian Award, Vandervort-Cobb was absolutely speechless. 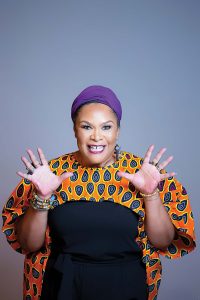 Joy Vandervort-Cobb, associate professor emerita of theatre and dance at the College of Charleston.

“I was so surprised and so humbled,” says the associate professor emerita of theatre and dance at the College of Charleston. “My spirit soared even as I stood confused that it had happened. I just could never have imagined I’d be honored this way.”

Past award recipients from the College of Charleston include Rochelle Johnson (2022), director of the Office of Multicultural Student Programs and Services; Charissa Owens (2021), director of diversity education and training in the Office of Institutional Diversity; Kenyatta Grimmage (2020), assistant director of access and pre-college programs for the Office of Admissions; and Anthony Greene (2019), associate professor of African American studies.

This year, Vandervort-Cobb will officially receive the honor at the BHIC celebration on Tuesday, Jan. 17, 2023.

“This is not an award one can expect. To be nominated is honor enough – to win the award is so incredibly humbling, words are difficult to come up with,” she says. “How does one begin to wrap one’s head around receiving an honor that suggests the life you are leading is in ANY way a mirror to Dr. King’s? I mean … seriously: I have no words.”

It may be a first for the well-known and beloved performer, whose vocal talents can be heard guiding visitors everywhere from the Hall of Presidents at Disney World to the U.S. Capitol Visitor Center to the Museum of the American Revolution and the National Museum of African American Music in Nashville, Tennessee. And – closer to home – her narration skills were featured in the College-produced, Emmy Award-winning documentary, Where Do We Go From Here?…the Legacy of Dr. Martin Luther King, which explores the Civil Rights Movement.

“Joy exemplifies the qualities of BHIC’s Martin Luther King Jr. Humanitarian Award because she lives every day as a proud Black woman, as an advocate for equity and as a champion of diversity,” says Miles Boinest, office manager and operations coordinator for the Department of Theatre and Dance, who first met Vandervort-Cobb at PURE Theatre, where she is a member of the core ensemble and now serves as the associate artistic director. “I can attest to Joy’s lasting impact within the Department of Theatre and Dance and the College community as a whole. The effects of her tenure at the College of Charleston are felt to this day.”

Indeed – despite a far-reaching career as an actor on television shows such as Lifetime’s Army Wives and CBS’ The Inspectors and as a stage manager on national touring productions of Sophisticated Ladies and Ain’t Misbehavin’ – it’s the impact Vandervort-Cobb had during her 25 years at the College that is most meaningful.

RELATED: Learn more about Joy Vandervort-Cobb’s impact at the College of Charleston.

“I’ve no idea of anything lasting, other than having made space and held space for the marginalized whilst I was there,” says Vandervort-Cobb, who served for many years as the faculty adviser to Delta Sigma Theta Omicron Chapter and faculty mentor to a number of performance, stage management and directing students. “My legacy lives in the love that continues to encourage and lift me up from former students. I am surrounded by love. My legacy is tied into the lives of those whom I taught and who continue to grow in their lives.”

Since her retirement in 2019, Vandervort-Cobb has stayed busy – most recently working on the final iteration of Fannie: The Music and Life of Fannie Lou Hamer, which started in Atlanta at True Colors Theatre, moved on to Actors Theatre of Louisville, and is now in Pittsburgh, Pennsylvania, as a joint production with the August Wilson African American Cultural Center, City Theatre Company and the DEMASKUS Theater Collective. 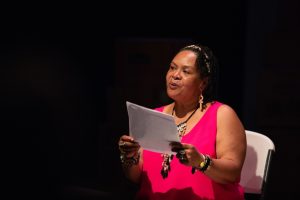 “Each of these theaters were bucket list places, and I am ever-astounded that, in my 60s, I still have a professional career,” says Vandervort-Cobb, who has also stayed busy in retirement by facilitating anti-racism training – something she trained for through ArtEquity, a national organization that does facilitation training, while she was still with the College. “My anti-racism work was out of a deep need to understand and facilitate my assumed role as DEI champion in the Department of Theatre and Dance and at the College as a whole. I learned so much and have taken that stronger understanding and facilitation into other spaces, initially focusing solely on ‘decolonizing the syllabus,’ and now working with different organizations to set in place policies and practices to decolonize their minds!”

It’s work like this that makes her the perfect recipient for the MLK Humanitarian Award, says Courtney Howard, the College’s chief diversity officer and vice president for diversity, equity and inclusion.

“Joy is not only a force on stage, but also off stage in the lives of so many,” says Howard. “Whether through teaching, mentoring, advocating or inspiring, Joy reminds us of what it means to be a humanitarian – concerned with and promoting others. That’s exactly what she does.”

On Tuesday, Jan. 17, 2023, at the John Monroe J. Holliday Alumni Center (69 Hagood Ave.) at The Citadel, Boinest will present the MLK Humanitarian Award to Vandervort-Cobb, and CofC student Benjamine Cordova – along with students from the other institutions – will share student reflections on the program’s theme, “It Starts with Me: Cultivating a Beloved Community Mindset to Transform Unjust Systems.” The program is from 6:30 to 8 p.m. and is open to the public.

BHIC was co-founded in the late 1980s by the affirmative action officers from the College and MUSC to enhance racial harmony between the Charleston region’s five institutions of higher education and the communities they serve.