What does the frontier of scientific discovery look like? Technicians in cleanroom suits manufacturing microchips inside a sterile lab? Check. Virologists on the trail of the latest public health emergency? Absolutely. Astrophysicists poring over the latest data from the James Webb Telescope? Without a doubt.

But it also looks a lot like Bonnie Kruft ’07, her long brown hair falling over her macrame sweater as she sits in front of a computer in her sparsely decorated office in Cambridge, England. Behind her on the wall is a big whiteboard that contains the beginnings of what she and her colleagues plan to do at AI4Science at Microsoft Research: solve some of society’s most difficult challenges by combining artificial intelligence with chemistry, physics and biology. 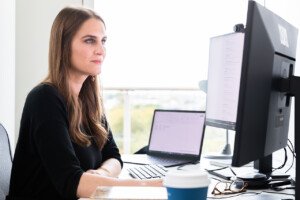 Kruft in her office at Microsoft Research’s AI4Science in Cambridge, England. (Photos by Leslie McKellar)

“We see a real opportunity to use machine learning, especially deep learning, to advance science in a whole new way,” she says. “The whole idea is to use AI to help discover new materials and molecules that address some of society’s most pressing challenges – from climate change and renewable energy to sustainable materials and the discovery of new medicines – and ultimately make an impact on the world.”

Leveraging her experience doing drug discovery with her doctorate in quantum chemistry, she says she’s up to the challenge and that her new role as the senior director of AI4Science, which she started last July, is perfect for her.

“Essentially, what I’m doing is helping to bring the vision for AI4Science to life,” she says. ”It’s like it was made for me because it builds on all of the previous roles I’ve had in my career so far, from the things I was working on during my Ph.D. to my experience building and deploying multiple machine learning and AI applications across the pharmaceutical industry.” 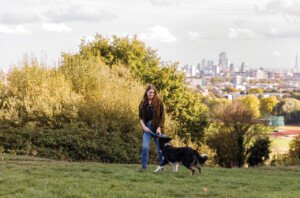 With her border collie, Oliver, at Hampstead Heath near her home in Highgate, London.

Approachable and well-rounded, Kruft certainly doesn’t fit the stereotype of an eccentric scientist, save for the hardworking and brilliant part. When she’s not solving the world’s most pressing problems, she can usually be found going for long walks with her border collie, Oliver, near her home in Highgate, London, as well as hiking and traveling. She also likes to bake, something she started doing while she was attending the College, and specializes in French pastries, pies and tarts. “It is one of my favorite ways to unwind,” she says.

Finding some relaxing downtime is a good thing given the demands of her work. Right now, Kruft is in charge of putting together a global dream team of AI researchers and scientists (50 people and growing) and mapping out their goals in three areas of focus: climate and environmental sustainability, drug discovery and life sciences, and large-scale physics simulations.

“I do love thinking about deep, challenging problems,” she says when asked what she loves most about her work. “But part of the puzzle is, how do we bring AI4Science to life? How do we bring the right people on board? How do we get them to work together in a collaborative and cohesive way? One of my joys is building and growing teams, especially AI teams, bringing everyone together and going from a very sort of siloed team to this global entity that’s all working on this common mission.”

Their mission is nothing short of a new – or fifth – paradigm of scientific discovery. The first paradigm was empirical, the second theoretical, the third computational and the fourth data-intensive, which applies machine learning to observational data to find patterns and make predictions. Streaming services like Netflix and Hulu use machine learning to make recommendations on what movies or TV shows you might like. Kruft spent most of her career using machine learning in the pharmaceutical industry to find a correlation between genes and diseases and then design medicines to treat those illnesses.

In the new paradigm of scientific discovery, rather than analyzing observational data, machine learning will be used to speed up the solution of the fundamental equations of science, which describe natural phenomena with high precision. But trying to model highly complex natural phenomena like how atmospheric haze affects climate or how subatomic particles interact is incredibly expensive and time-consuming, even on the fastest supercomputers.

AI can be a tool, however, to address this problem, using deep-learning emulators – algorithms that can perform new calculations with high efficiency by several orders of magnitude faster than before. This approach can help find more efficient ways to explore new materials and molecules, such as finding new substrates to reduce carbon dioxide in the atmosphere through carbon capture; new molecules that become medicines to treat disease; new electrodes for powering the hydrogen economy; and many others. 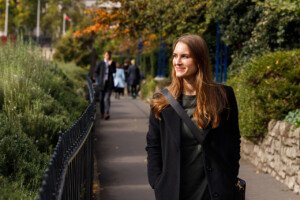 “This is an exciting time for machine learning and science that could help us make new important scientific discoveries,” says Kruft. “I love knowing that we could have a huge impact on the world. I’ve been working in drug discovery for a long time, but I’ve always wanted to get involved with climate change and sustainability as well. It’s a great opportunity to stay close to something that I’m familiar with and passionate about, but also be able to branch into a new domain.”

Kruft is a potent reminder that people often become what they see. Her parents, Jon and Vivian, both hold chemistry degrees from the University of Delaware (they met in organic chemistry class). While Jon has spent most of his career as an engineering consultant, Vivian has run the chemistry lab at Montgomery College in Rockville, Maryland, for more than 30 years. When a young Kruft didn’t want to go to daycare or preschool, she became Vivian’s little lab helper, complete with her own white lab coat.

“She was a fixture in the lab,” recalls Vivian, “so I was delighted when she went into chemistry. If I had been a beautician, maybe she would have her own nail salon now. Who knows?”

One of Kruft’s favorite experiments to do when she got a little older was the general chemistry lab course staple of pulling out a string of nylon at the interface of two chemical combinations in a beaker. But she was exposed to a lot more than just science growing up, thanks to a musical influence on her mom’s side of the family and an artistic one on her dad’s half, and she excelled at both the piano (something else she shared with her mom in their free time) and figure skating – she would be on the ice every day at 5 a.m. before a knee injury cut short her career.

“So, I kind of have these three dimensions, which I think has really shaped my personality to be both very scientific but then also very creative,” says Kruft, whose older brother, Jon, is an engineer in the Navy. “It’s helped me in my career, too, because to work on things like quantum chemistry, or AI and drug discovery, or AI for science, you have to kind of think outside of the box a little bit. The creative mindset really comes into play.”

She was 8 when she told her parents that she was going to live in Charleston one day after a family vacation there. Sure, she applied to other universities, but no one doubted she would end up at the College of Charleston, where she began as a biology major in 2003.

“I ended up switching to chemistry because I really loved the department,” she recalls. “All of my chemistry courses were very small and intimate, and I became very close with my professors and my classmates. It was just a nice little community of chemistry majors that I really felt a part of.” 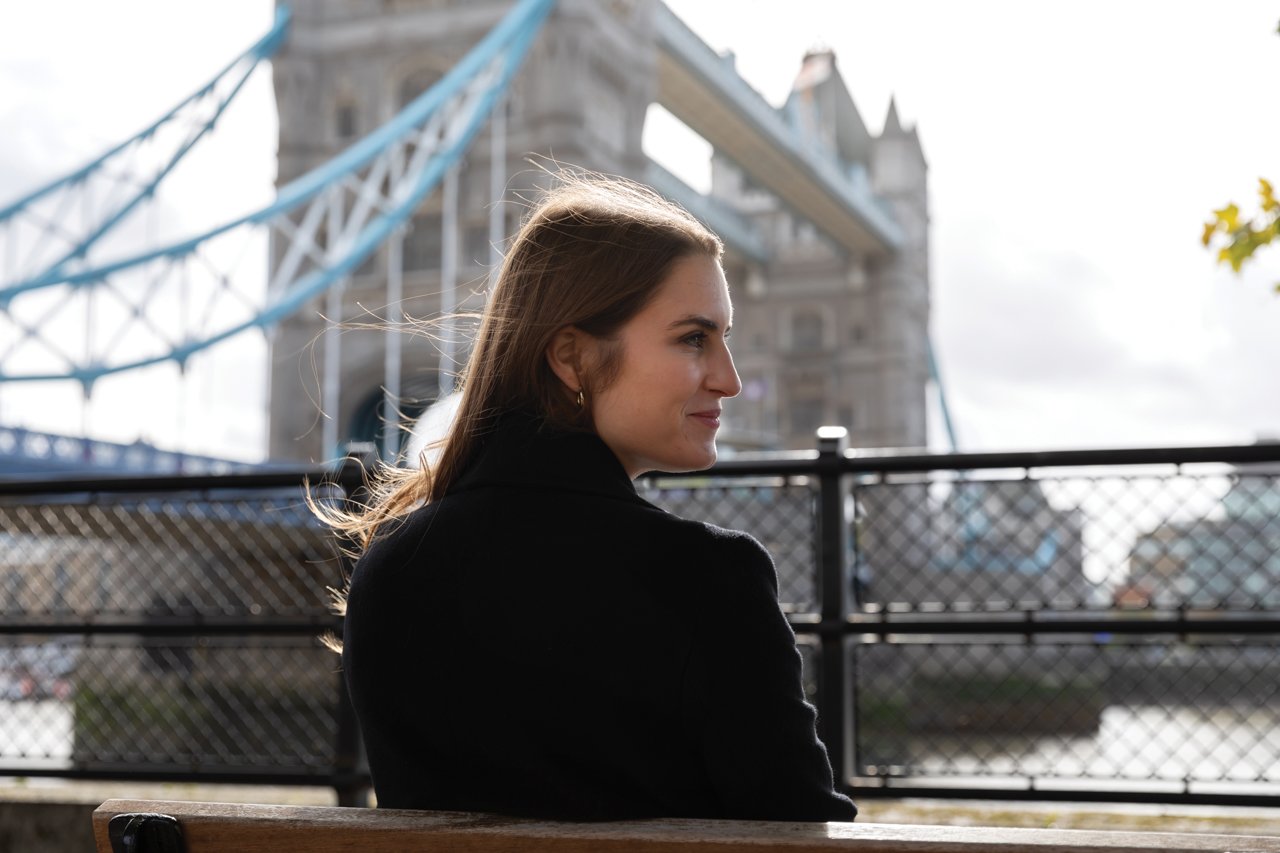 Sitting beside the River Thames in London with Tower Bridge in the background.

But perhaps the favorite part of her experience at the College was the lifelong friendships she formed with six other women she met her first year and then roomed with in a big yellow house on Vanderhorst Street for the next three years. Kruft also worked part time at Pharmaceutical Research Network, furthering a growing interest in drug discovery and pharmaceuticals. But it was her weekend work as a waitress at the now defunct Social Restaurant + Wine Bar on East Bay Street that led to her next move after graduation.

When she casually mentioned to one of the Social Restaurant wine distributors one day that she was about to graduate with a chemistry degree but was unsure of what she wanted to do except that she wanted to travel, he told her, “With your chemistry degree you can go make wine literally anywhere in the world.” Interest piqued, Kruft went back to the big yellow house and started doing some research, discovering she could work in a lab as an enologist doing quality testing on wine. She wound up at Kirrihill winery in South Australia testing mostly rieslings for six months before spending two years in New Zealand testing sauvignon blancs at Matua winery in Auckland.

She loves wine, and friends and family still make her do the taste tests when they order a bottle at dinner, but the work didn’t fulfill her scientifically. “I didn’t feel like I was learning or growing skills in a new way,” she says. “Although it was interesting and fun, it’s very repetitive, and I’m the kind of person who needs constant challenge.”

So, she returned to the U.S. and began work on her doctorate in quantum chemistry at the City University of New York. Her thesis focused on exploring the use of modern density functional theory methods to compute the structural, spectroscopic and mechanistic properties of biological molecules. “She had Vivian and me review it,” says her dad, Jon. “We both consider ourselves intelligent in the sciences, but it was very, very hard to understand.”

Kruft’s rise in the pharmaceutical industry was swift with five promotions in seven years, culminating with the position of head of research and development data, analytics and artificial intelligence at AstraZeneca. Based in Cambridge, she oversaw a team of 150 data and AI engineers who spanned six countries and were focused on delivering advances in oncology and biopharmaceutical research. They succeeded in creating what’s called an augmented drug design platform and a biological insights knowledge graph, earning her team the highest accolade at the company, the CEO Award, as well as a prestigious Bio-IT World Innovative Practice Award in 2022.

“That was about how do we use data and AI to design new molecules, select drug targets, predict activities and then how best to synthesize those compounds using machine learning and computational methods in the lab,” she notes. “It was a fantastic role, but then Microsoft Research came along, and it just seemed like such a great opportunity to get involved and build a new team from scratch with this very sort of high-powered mission. I’m surrounded by a lot of smart, talented people. I feel very fortunate to be here.”

No doubt her colleagues feel the same way about her. Her parents couldn’t be prouder, of course – on the wall outside of her mom’s office is a collection of photos of famous women in STEM with her daughter’s picture right in the center – even if they’re not sure what she does.

“I don’t understand any of it,” laughs Vivian. “She is on a different plane of intellect from me,” to which Jon adds, “I get about every third word, but it sounds like something that will be good for us all.” 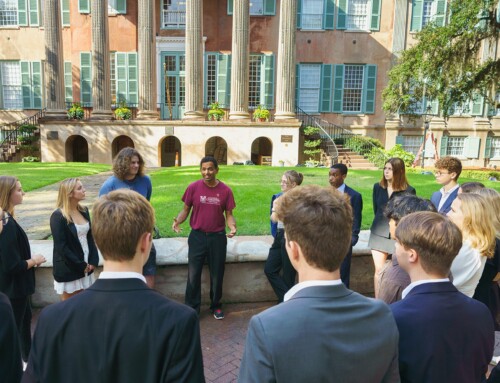 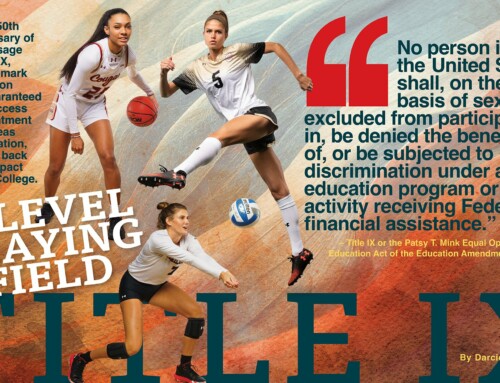