CofC Students who Appeared on ‘The Ellen Show’ Welcomed to Campus

It’s official – Jaheim President and Darius Smith, who appeared on The Ellen Show in the spring of 2019, are part of the College of Charleston community.

The two College of Charleston freshmen, both of whom are teacher education majors, met with College of Charleston President Andrew T. Hsu, as well as other College administrators, on Friday, Sept. 13, 2019, to officially sign their offer letters, effectively giving them each a full financial ride during their time at the College. President and Smith are also members of the College’s Call Me MISTER Program, which academically and financially supports male minority students who choose to major in education. 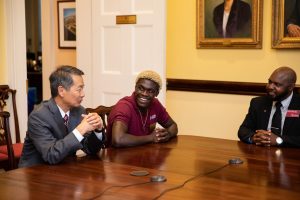 “Welcome to the College of Charleston,” Hsu said. “You represented the College really well even when you were not even students. We look forward to continuing what you represent and what you accomplish. And, remember we’re all here for you, for your success.”

So far, the two students say their careers as college students are going well. And they welcome their burgeoning roles as student-leaders at CofC.

“At the end of the day if me being myself can impact somebody else’s life for the better and make them a better student or a better person, then that’s never fearful for me, I want that to happen,” said Smith. “I’m only giving love, because I want love in return.”

President said that coming to the College is the start of a new chapter in their lives and that he’s looking forward to what comes next.

“I love being a leader and inspiring people to be their best selves,” he said, adding: “This isn’t the final resting stop. We’re going to keep trucking!”

RELATED: Check out more on Smith’s and President’s big moment on ‘The Ellen Show.’

President and Smith appeared on an episode of Ellen Degeneres’ eponymous talk show in March 2019 after their high school classmate Tatiana Brown, who is also a freshman at the College, wrote a letter to The Ellen Show to draw attention to the lack of minority teachers in South Carolina and to highlight her classmates’ passion for the education profession. Degeneres surprised President with his acceptance letter to the College of Charleston, before surprising them both with the news that CofC would be covering their college tuition for their entire undergraduate careers. On top of that, DeGeneres, in conjunction with Cheerios, presented Smith and President each with a check for $20,000 as well as a check for $10,000 for Ashley Ridge High School, which they attended.

President and Smith used some of the Cheerios funds to help launch a mentoring program for at-risk middle school students who will attend Ashley Ridge High School in Summerville, S.C. Both young men graduated from Ashley Ridge in June before coming to CofC.

RELATED: Learn more about the high school teacher who inspired Smith and President to pursue careers in education. 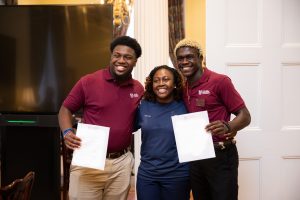 The second annual Call Me MISTER  Signing Day celebration for all eight new members of the Call Me MISTER Program will take place on Saturday, Sept. 14, 2019. The program will continue to grow its outreach efforts this year, including plans to do more mentoring in local elementary schools on the Charleston peninsula and begin a new partnership with the organization Boys with a Purpose, which is based out of Memminger Elementary School in downtown Charleston. The Call Me MISTER Program has also received a grant from Dollar General to purchase culturally relevant books and deliver them to at-risk students at a local high-poverty elementary school. Additionally, the program has launched its new Living Learning Community in Berry Residence Hall, where six of the group’s freshmen all live in the same suite with the goal of creating a support system as minority students majoring in teacher education.

Anthony James ’12 (M.A.T.), director of minority education and outreach for the College’s School of Education, Health, and Human Performance, oversees the Call Me MISTER Program and says that, between the buzz generated by President and Smith and the growth of the program’s community outreach efforts, Call Me MISTER is building new momentum and gaining new visibility both on and off campus.

“I think it’s taking off right now, and just having these guys [President and Smith] on campus just re-emphasizes what we’ve been doing, which is producing high-quality educators,” says James. “Our young men are doing amazing things in the schools and outside of the schools. I’m just so excited to have them all on campus. It’s a great group of guys!”