Let’s go back to the summer of 2005. That’s the year that Hurricane Katrina devastated New Orleans and other communities around the Mississippi River delta. That powerful storm caused tremendous damage ($81 billion worth by official estimates), but it also led to at least one positive outcome – the Dutch Dialogues.

The Dutch Dialogues are a series of public meetings, focus groups and consulting sessions that have since taken place between civic leaders, stakeholders and flooding experts. They began in New Orleans with a focus on that municipality, then spread to Norfolk, Virginia, and more recently to Charleston. The results of Charleston’s Dutch Dialogues, which have included several College of Charleston experts, will be shared during a public meeting at 6 p.m. on Thursday, Sept. 26, 2019, at the Galliard Center, at 2 George St., in downtown Charleston.

“Who better than the Dutch to consult about living with water?” reads the promotional literature for this initiative. And it’s true. More than 800 years of residing at the water’s edge make them experts in adapting to these circumstances. “They know that flooding cannot be fixed,” continues the literature, “but risks can be reduced.” 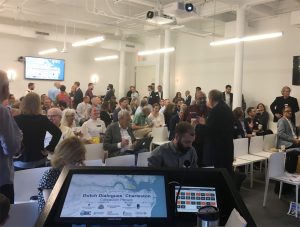 Norm Levine, director of the Lowcountry Hazards Center, speaks with other leaders during a session of the Dutch Dialogues. (Photo provided)

For the past year, representatives from Charleston have been meeting with a cadre of experts to examine flooding solutions, primarily for four specific problem areas in the immediate region (two on the Charleston peninsula, Church Creek in West Ashley and Johns Island). Among those experts are four faculty from the College, including Scott Harris, Norm Levine, Steve Jaume and Tim Callahan, all from the Department of Geology and Environmental  Geosciences in the School of Sciences and Mathematics, along with Landon Knapp, a coastal resiliency specialist who holds a shared appointment in the department and with the S.C. Sea Grant Consortium.

“For some time now, our department has served as a thought leader for the Charleston community, providing expertise on natural hazards,” explains Callahan, the department’s chair. “Dr. Levine, who directs the College’s Lowcountry Hazards Center, has been a consultant for staff members at the City of Charleston, using GIS map information to provide key assessments regarding flood hazards. The center was created more than 10 years ago expressly to advance the state of knowledge on flooding and inundation in the Lowcountry as well as other natural hazards, such as earthquakes, and to communicate that information to the public.”

RELATED: Find out how the Lowcountry Hazards Center is working with students to help reduce flooding in Charleston. 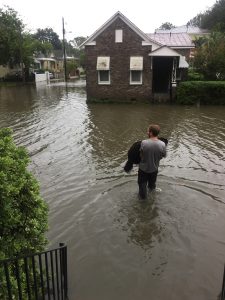 A man carries his dog through a flooded street in a Charleston neighborhood. (Photo courtesy of the City of Charleston)

Callahan says that both Harris and Jaume put in several 14-hour days as pro bono consultants during the most recent Dutch Dialogues sessions in July, and Levine served on a panel for the sessions. Their input, he says, will be apparent in the final report.

Harris, a specialist in coastal geology who has studied shoreline dynamics in this specific region of South Carolina for over two decades, regards the Dutch Dialogues as an important moment for Charleston’s future.

“Our community has experienced a fair bit of unchecked or under informed development in the past two-plus decades,” he explains, “and that has created some negative consequences such as the flooding that’s regularly experienced by homeowners around the Church Creek area West of the Ashley River. It’s really important for all of us, but particularly for people in city planning and real estate developers, to understand the geology and the geological history of this region. When we have that information – including knowledge of which areas can absorb more rainfall and which can’t – it can drive better decisions regarding development, and that’s particularly true for areas such as Johns Island that aren’t yet as developed. Fifty or a hundred feet here and there in terms of siting for buildings can make a huge difference.”

Harris says that the 220-page report from the Dutch Dialogues will offer information that can help community members shape future development in more sustainable ways.

“We’ll have a document that says, ‘here’s the problem, here are some of the solutions,’ and that’s critical,” he says.

For more information about this initiative, visit the Dutch Dialogues website at dutchdialoguescharleston.org.

Featured image: A neighborhood street floods in Charleston. (Photo courtesy of the City of Charleston)