When most people think of graduation at the College of Charleston, white dinner jackets and dresses, roses and well wishers in the Cistern Yard come to mind. Those are key elements of the traditional spring commencement ceremonies.

But students graduate from the College in the winter as well. And this year, on Saturday, Dec. 18, 2021, around 100 undergraduates and several dozen graduate students will celebrate their hard-earned success and receive their degrees during winter commencement. In all, around 500 graduates are earning their degrees.

Let’s meet a few of these exceptional individuals. 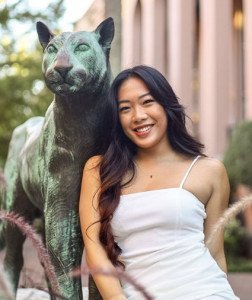 Lilli Butterfield, an Honors College student, is receiving her B.S. in exercise science at the College of Charleston’s 2021 winter commencement.

Exercise science major Lilli Butterfield – a soon-to-be graduate of the Honors College – has thoroughly enjoyed her time at the College. She was so earnest about her work as an undergraduate here that she managed to finish in just 3 1/2 years.

A native of North Carolina, Butterfield has known for a long time that she wants a career in the medical or health fields. And, as a student at CofC, she managed to prepare herself in a comprehensive way.

“I see myself moving into medical device sales eventually,” she says. “And, given all the knowledge that I’ve acquired as an exercise science major – and the internships that I’ve served – I think I’ll be a good fit.”

Among those internships she mentions was a yearlong stint conducting research for the Charleston Climate Coalition. She complemented that by focusing her bachelor’s essay on the public health implications of Charleston’s proposed Lowline Park, which would replace an old railroad bed with a scenic walking trail.

After graduating, Butterfield will be leaving the College, but not Charleston. She has accepted a job at Blackbaud on nearby Daniel Island. “I’m very excited to be joining this company,” she says. “It may seem strange to move from exercise science to working in software, but I really like the idea of a challenge as well as learning new skills and then applying those to whatever I do next.” 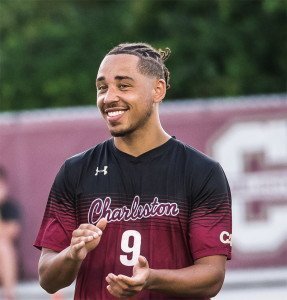 Rio Murray, a member of the Cougars soccer team, is graduating with a B.S. in sociology this December.

Rio Murray, from Manchester, England, is another undergraduate finishing his college career this December. He’s a sociology major who plans to work in the nexus between that discipline and sports.

“I’ve always been passionate about sport,” Murray says. “I’ve played soccer my entire life and, more recently, on the men’s team here after I transferred from the University of New Mexico. As an international student, being part of that team turned out to be the perfect situation to help me make friends and get settled in Charleston.”

The city and the opportunities at the College are what drew Murray here.

“This place is amazing, and the soccer program is strong,” he says. “If you know where I come from, in northern England, you’ll understand how appealing Charleston’s weather can be. But the standard of education here was a massive factor for me as a transfer student – and, now that I’ve been here, I realize that the professors are great. I’ve had some very stimulating classes.”

Murray gravitated to sociology as a major after taking Sociology of Sport with Sarah Hatteberg, assistant professor of sociology

“That class really piqued my interest in sociology,” he says, “so I started delving deeper and taking more courses in this field. I’m also a minor in psychology because I feel that those two subjects go hand in hand.”

For the near term, after graduation, Murray says he’ll be staying in Charleston and exploring ways to incorporate his two passions – sports and sociology.

“Charleston is such an amazing place,” he says, “it’s hard to leave.” 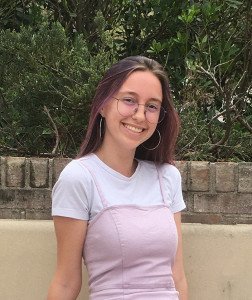 Lydia Heath will receive her bachelor’s degree in geology at CofC’s 2021 winter commencement.

Another alumna in the offing, Lydia Heath, has just wrapped up her studies as a geology major, and will also be graduating a semester early. She, too, already has a job lined up. In early January, she’ll begin work as a systems specialist at ECHO 81, a hydrographic consulting and equipment company based in Hartwell, Georgia.

“I’m really excited to have secured this position,” Heath says. “I actually spent last summer interning with this firm, a position that faculty in the geology department helped me secure. When I was a sophomore, my advisor, Tim Callahan, suggested that I get involved in the BEAMS seafloor mapping project that professor Leslie Sautter directs. I really fell in love with that science, and my experience doing research with that team led to the internship with ECHO 81.”

As a freshman, Heath thought she would pursue arts management, but an introductory class in geology captivated her.

“I really enjoyed the subject matter – earth science, evolutionary processes, etc.,” she recalls, “and the professors I encountered in this department were so easy to get to know and so encouraging. They all teach in such an interesting way, and it turns out to be a very tight-knit department. There are regular social gatherings, and there’s always the annual senior roast where those graduating are presented with a Hawaiian shirt.”

Though she’s eager to learn more about the hydrographic world, she also feels a little strange leaving college. “I’ve had great experiences here. But I also had so much fun working for that company last summer, I know I’ll hit the ground running.” 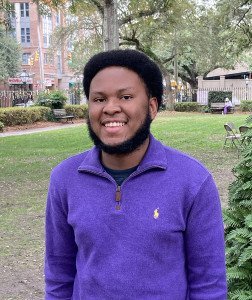 Dedrick Moulton is receiving his M.S. in environmental and sustainability studies at the College’s December 2021 commencement.

The same thing could be said of Dedrick “D.J.” Moulton, who will be presented with his master of science in environmental and sustainability studies at the winter commencement ceremony. He came to the Graduate School not knowing exactly what he’d focus on.

“When you go to graduate school, you don’t expect to be considered an expert right out of the gates,” Moulton says, “but that’s sort of what happened for me. As an undergraduate, I concentrated on hydrology, watershed management and hydrogeology, and somehow, even before my classes started, I was approached by professor Norm Levine from geology. He asked me to work in his GIS lab. I did that for a short time, and it led to working on a project for Kiawah Island.

“That project was a dream situation for a person in graduate school,” he continues. “The role was fully funded, and it meant that I got in-state tuition. So, I was able to apply my skills and knowledge in the field and still attend classes. In that role, I was part of a team charged with monitoring the water table on the island. We examined how and why the water levels change and looked at a number of aspects including salinity levels and the intrusion of saltwater into the aquifer.”

That job eventually evolved into Moulton’s master’s thesis. At one stage, he traveled to the annual conference of the National Geological Society of America and gave a 15-minute talk on his methods and findings.

“It turns out that this kind of monitoring isn’t widely done in coastal communities,” he explains. “Our methods were fairly novel. And there’s plenty of useful information to be found with this approach. I think this study will end up being a long-term project for Kiawah Island.”

And for Moulton? It’s likely you’ll see him around campus in the coming year because he’s agreed to work full time for the College’s Lowcountry Hazards Center. As a researcher there, he’ll be examining data that influences flood insurance rates in the Lowcountry and gathering skills that he’ll apply to whatever his next role turns out to be.

Winter commencement will take place at TD Arena at 2 p.m. on Saturday, Dec. 18, 2021. Simon Lewis, professor of English, will be the commencement speaker. For attendees, campus COVID-19 protocols will be in place, meaning that social distancing and mandatory face coverings will be required. The ceremonies will be streamed live on the College of Charleston Facebook page and the College’s YouTube channel. And, approximately three weeks later, the ceremony videos will be available on the commencement website.