Above: Avery Research Center Executive Director Tamara Butler in front of a home on Bull Street once thought to be that of Denmark Vesey. Scholars later determined that 56 Bull Street was not Vesey’s house and was actually constructed subsequent to his death, but it retains its National Historic Landmark designation.

Almost 40 years before the start of the Civil War, Denmark Vesey tried to organize an uprising to free the enslaved people of Charleston before white authorities got tipped off about the revolt. Following a one-sided trial, Vesey was hung, along with six other Black men on July 2, 1822, for the charge of “attempting to raise an insurrection among the black against the whites.” 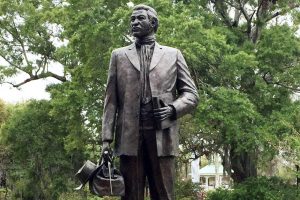 A statue of Denmark Vesey located in Hampton Park in Charleston, S.C.

Two hundred years later, Vesey (vee-SEE) is finally getting his due. The Charleston Gaillard Center, in partnership with Mother Emanuel AME Church and the soon-to-open International African American Museum (IAAM), will hold a series of events July 14-16, 2022, to mark the bicentenary of the uprising and Vesey’s death. The three-day celebration will consist of discussion panels, musical and comedy performances, and art and history installations.

The College Today caught up with Butler to discuss the importance of the anniversary and Vesey’s place in history.

Most Charlestonians probably aren’t familiar with Vesey’s story, are they?

No. Even I am still learning, as there isn’t much in the written record from his point of view. The panel is going to touch on the history of who he is, as well as his legacy and how Charleston has changed since then. How is the city grappling with that history? Because some folks are still not sure why we’re celebrating this “terrorist,” “troublemaker” or “unruly Negro.” I also hope we recognize Vesey’s community – as there were so many more people who were arrested with him, over 100 who trusted him and the vision.

What do you know about him?

I believe that he was born in the Virgin Islands and came to Charleston as an enslaved person in 1783. That interests me because it helps us understand Charleston’s connections to Caribbean nations and the currents of the slave trade. Was he emboldened by any of the 1795 uprisings in the Caribbean – Curacao, Demerara, Dominica, St. Vincent, Puerto Rico? Did the uprisings in Barbados (1816) or Jamaica (1795, 1803, 1806 and 1815) inform who he was and his visions of uprising? We also know that he was able to keep some of the money when his enslaver hired him out. He bought a lottery ticket in 1799 and won $1,500, unbelievably. A huge thanks to Nic Butler with the Charleston County Public Library for offering insight into Charleston’s 18th-century lotteries. He used $600 to buy his freedom.

What else would you like to know about him? 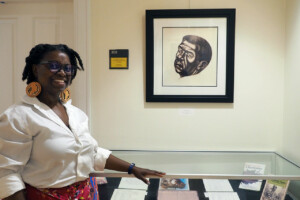 Tamara Butler stands by a Denmark Vesey exhibit at the Avery Research Center.

The house once thought to be his home is right up the street from the Avery Research Center. Scholars later determined that 56 Bull Street was not Vesey’s house, but he lived on Bull Street, probably very close to there. The house still retains its National Historic Landmark designation as a physical marker to commemorate the area, which has huge symbolic significance. But I’d love to know what it was like to be a free Black man in Charleston in the early 1800s. What did he see? How did he navigate the city, especially as a freed man who was surrounded by so many folks who were still enslaved? He became a carpenter, so whose houses did he build? And, of course, what prompted him to say, “We don’t have to live this way?” Freedom is a state of mind, so there were probably a lot of folks who felt the same and were looking for opportunities to link up with people who were legally free to move toward new worlds.

Do you know anything about the revolt?

We know that he was hoping to free hundreds of men, women and children. The collective of co-conspiring freedom fighters – about 100 men – were going to sail to Saint Domingue (currently known Haiti). I imagine he picked Haiti because there had been a successful insurrection there in the late 1700s and early 1800s. They succeeded in not only ending slavery but ending French colonial rule, as well. I appreciate Vesey’s story because it reminds us when liberation did not (and at times could not) make room for a transatlantic kind of journey – like we see in the story of Ellen and William Craft. The Caribbean islands were sites of safety and points of return for Black people.

RELATED: CofC Podcast: Bernard Powers on the Life and Legacy of Denmark Vesey

Why is it important that we celebrate the bicentennial?

It is important to recognize that the fight for Black freedom in Charleston didn’t start and end in the 1960s. It’s rare that the City of Charleston talks about the history and modes of Black resistance. By not talking about resistance, everyone loses. That weighted silence forecloses on opportunities to be responsible leaders, to make strides in critical Black storytelling and to break the cycle of miseducation. Instead of thinking that Black people just went along with being enslaved, Vesey and others demonstrate that not all enslaved people were complacent or passive. Some were agents of change. We need to recognize that activism and resistance in Charleston has always been grassroots. Vesey and all who organized with him demonstrate that: Black people fighting for Black lives. This anniversary is an opportunity to remind everyone that if Black lives matter in Charleston, then our stories matter to Charleston. Two hundred years later, Black people are still fighting for equity, for affordable housing, for a living wage, access to health care. Still wanting the freedom to be left alone, the freedom to wander, and to live without being hassled and questioned.

What does the anniversary celebration say about the City of Charleston?

First, it could be seen as a celebration of life. After the execution of Vesey and his comrades, Black people were not allowed to publicly grieve. Could you imagine being physically assaulted because you’re in mourning? We could also look at the bicentenary as a reckoning and acknowledging of missteps. There was a time when the city did not want to say Vesey’s name or display renderings of him, so the fact that this city is taking a moment to say, “We want to rethink how we’ve wronged this person beyond 1822,” is encouraging. The events are invitations to reflect on the context of his death, that he shouldn’t have died and the folks who were with him shouldn’t have died in their demand for freedom. I hope that Vesey becomes an antenna to draw people into Charleston where they can begin to study. If you’re interested in who he is and what he represents, there are publications to read, podcasts to check out, archives to visit. While we’re listening to the panelists or enjoying the performers next week, I want us to recognize that we’re here to reflect on the deferred dreams of ancestors. We are remembering and thanking Vesey, his comrades, and all the people before and after July 1822 who wanted the freedom to be and to find rest in the world they created.